As part of the year-long 50th anniversary celebration of the iconic Monaco square chronograph, TAG Heuer marked the end of a year of exceptional festivities with a fifth, and final, limited-edition.TAGHeuer continues to enrich its anniversary series with a new and stunning watch: the Monaco Heuer 02. 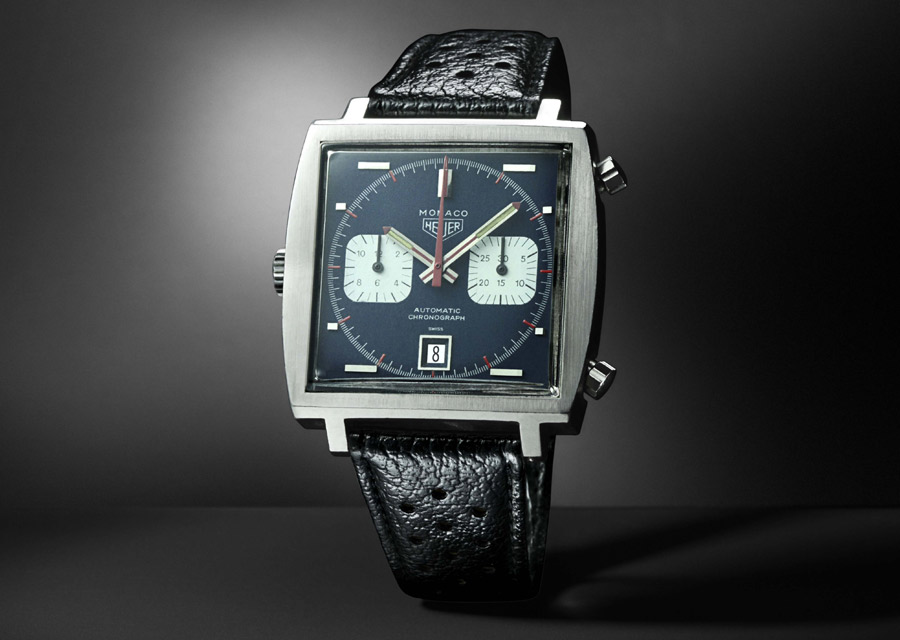 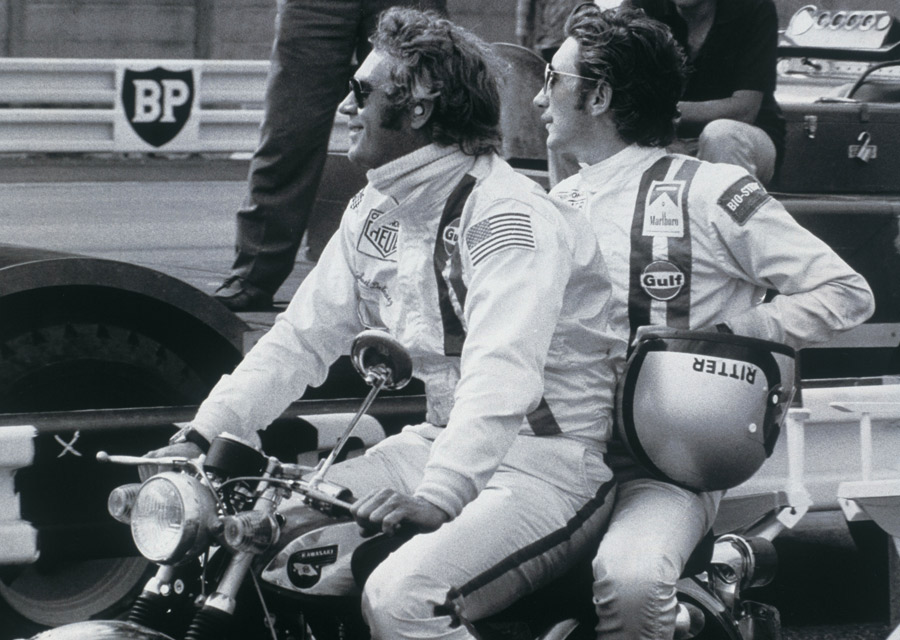 Originally introduced in 1969 by Jack Heuer, the Monaco model ended up becoming a legendary timepiece when it appeared on the wrist of the American actor and driver Steve McQueen in the movie Le Mans released in 1971. This year, TAG Heuer celebrates the 50th anniversary of this iconic model. A much-anticipated event for collectors and aficionados of fine mechanical engineering. This celebration is also an opportunity to rediscover TAG Heuer’s emblematic square-faced chronograph, which historically featured a blue dial, white subsidiary dials, two chronograph pushers on the right and a crown on the left, through five modern models whose time-spaced presentations have set the pace for the watchmaking news in 2019. 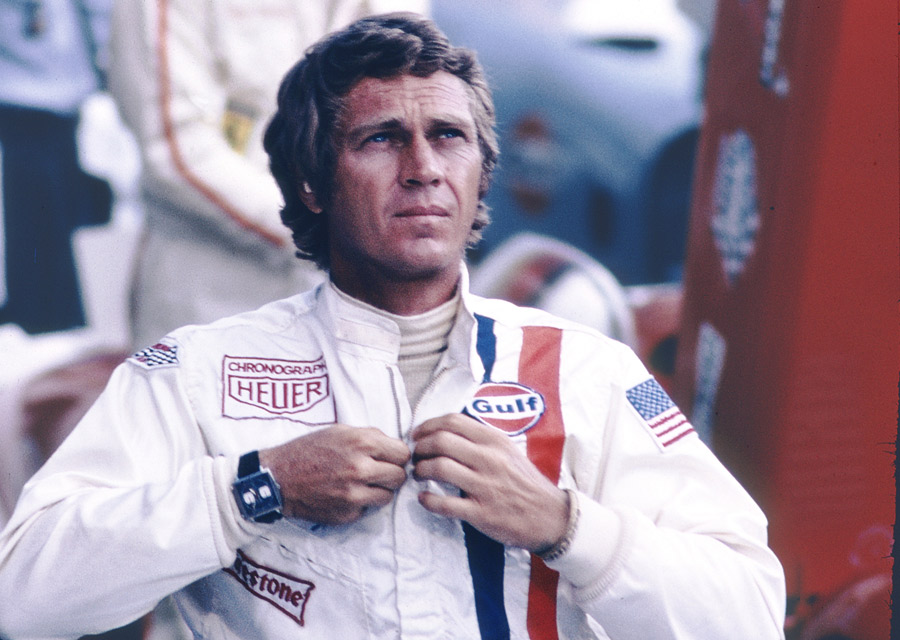 All the series of the “Monaco Through Time” are limited to just 169 pieces and represent the past marking decades since its creation. Unfortunately, only few pieces are still available around the world! From a collector point of view, this means that demand may be higher in future auctions. You can also take a look at specialized websites when you can purchase a Monaco from a private collector…but for a higher price.

Last May, TAG Heuer unveiled the first of five models at Monaco Formula 1 Grand Prix. The 1970’s-inspired racing chronograph features a green dial with a “Côtes de Genève” pattern. Beautifully finished with details, the watch’s face is teamed with a perforated leather strap and the overall look is certainly not lacking in personality. 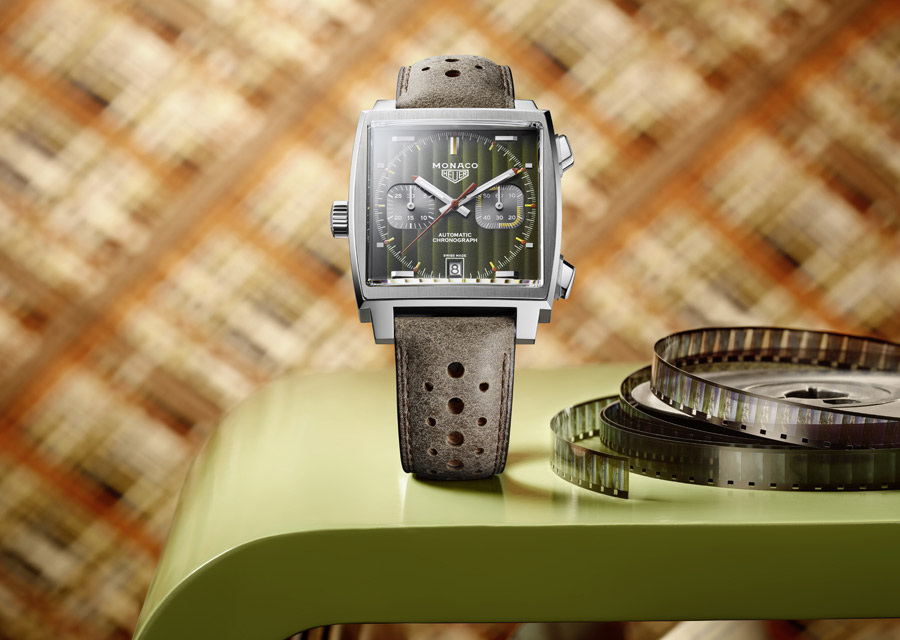 Then, in June, TAG Heuer introduced a second watch in its anniversary limited edition series at the legendary 24 Hours of Le Mans endurance race. This Monaco captures the sporty spirit with a sunray bold red dial and a nice perforated leather strap. 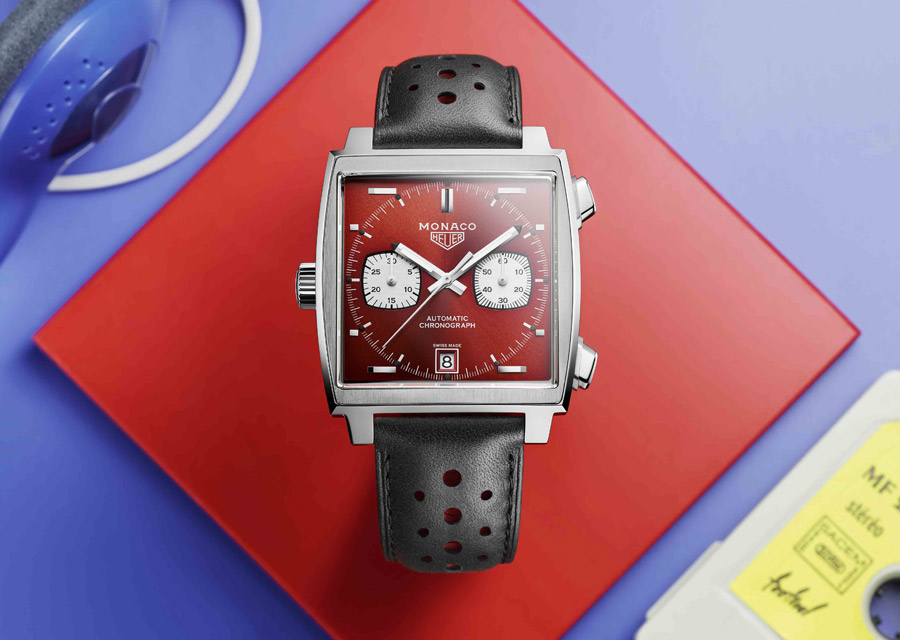 Celebrating the 90’s, the third series was presented at the 2019 New York City E-Prix in July. This specific edition features a blue and silver color design, highlighted by a grey grained dial with red accents. The watch is presented on a blue leather strap with red lining that brings a very modern touch to the watch. 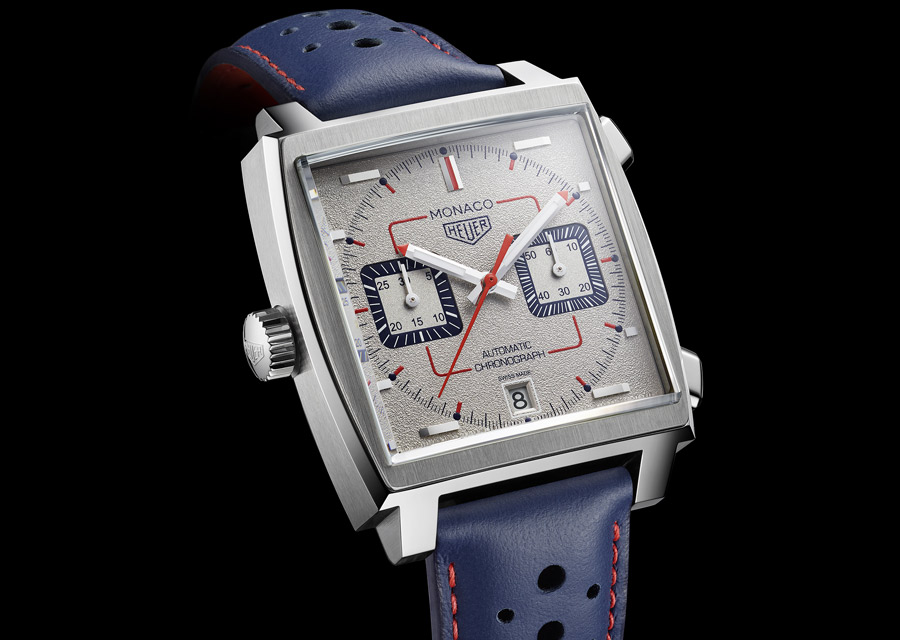 Unveiled at the Tokyo National Museum in Japan, the fourth version takes us back in the 2000s. Officially revealed in September, it follows the chronological principle of the other limited editions. But this time, the watch sports a classic black and white appearance, which suits the Monaco’s design perfectly. 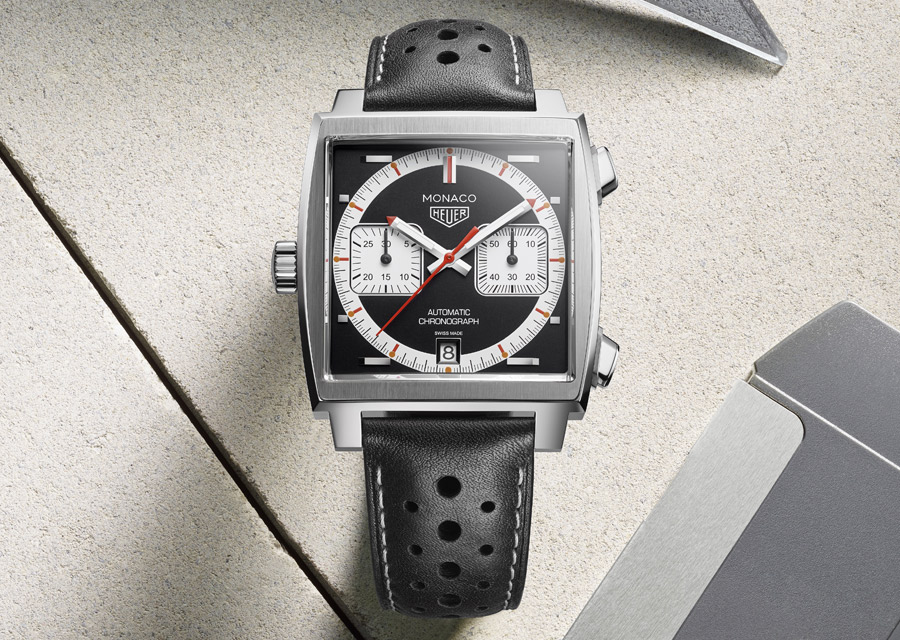 And it was on October 28, the Swiss manufacturer chose Shanghai to launch its final tribute. Brand ambassadors Cara Delevingne and Li Yifeng, alongside Stéphane Bianchi the CEO of TAG Heuer and the LVMH Watchmaking Division, and Frédéric Arnault, the Chief Strategy and Digital Officer of TAG Heuer were present. The last Monaco timepiece showcases the aesthetic criteria of the 2010s: the dial is pure and features a sleek and charcoal color, and two rhodium-plated sub-dials. With elegance, TAG Heuer has finally come full circle with its Monaco 50th Anniversary series. 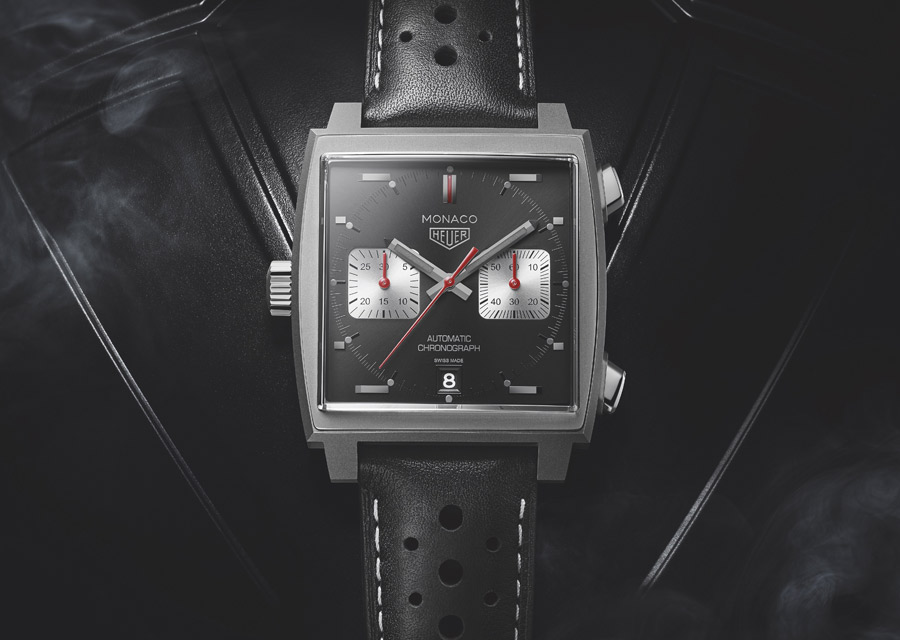 Attractive in many ways, the five new models uses the historical “Monaco Heuer” logo at 12 o’clock and are water-resistant to 100 m. Each case, 39 mm in diameter, is powered by the Heuer’s Calibre 11 automatic movement. And last but not least, each timepiece will come in a special dark blue box decorated with the Heuer logo and a horizontal check-pattern stripe, inspired by the original box of the 70s.

Finally, the story behind that iconic watch is told in the very interesting book Paradoxical Superstar. In the words of British journalist and author Nicholas Foulkes, watch expert Gisbert Brunner and American author Michael Clerizo, this book includes precious archival excerpts, sketches of designs and movements. A special foreword has been written by H.S.H. Prince Albert II of Monaco.

Just one problem; all the five limited timepieces are objects of desire and only a few collectors have been able to get one. A bummer, yes, but TAG Heuer has also released non-limitedother Monaco watches. First, Monaco fans know that in 2015 TAG Heuer reinvigorated the original Monaco in a thriving modern collection (5250 €). Then, aficionados of novelties will be delighted to know that another square-cased watch will be powered by the Heuer 02, an automatic chronograph movement. This newest piece features a deep blue dial (5 400 €). 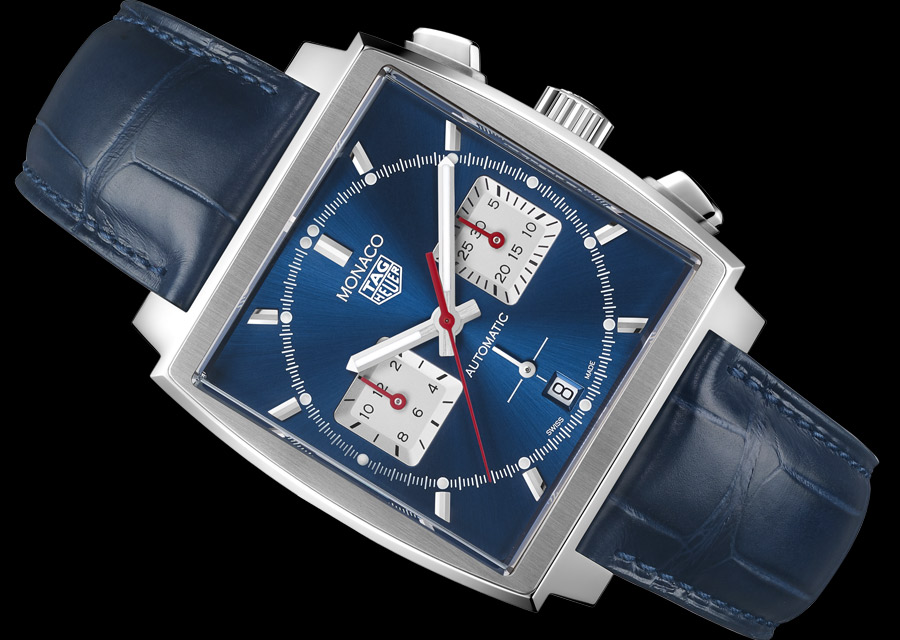 One another big surprise was that TAG Heuer says farewell to the Calibre 12 movement with a final limited edition of 1,000. This timepiece comes with a stunning ruthenium grey dial (also available at 5400 €).

Even if the colors and the mechanisms are different, the two wrist instrument share some similarities: the most obvious are the crown and the pushers position on the case, and the other is a see-through sapphire crystal case back, revealing the architecture of the movement. 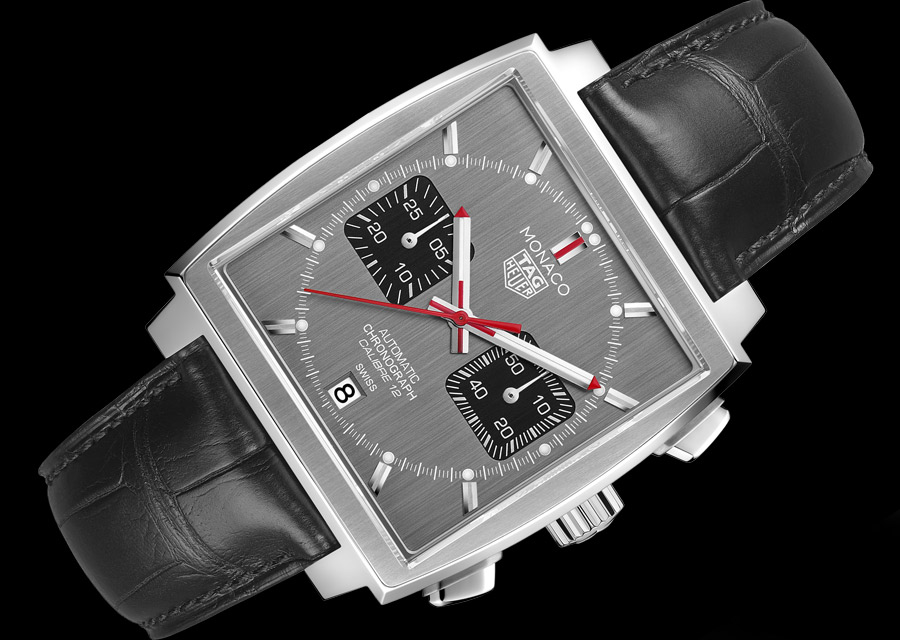