As the women’s Royal Oak celebrates its 40th anniversary, Audemars Piguet unveils the new Royal Oak Frosted Gold. A shining reinvention of an iconic design, this contemporary timepiece available in both white gold and pink gold has been created in collaboration with Florentine jewellery designer, Carolina Bucci. 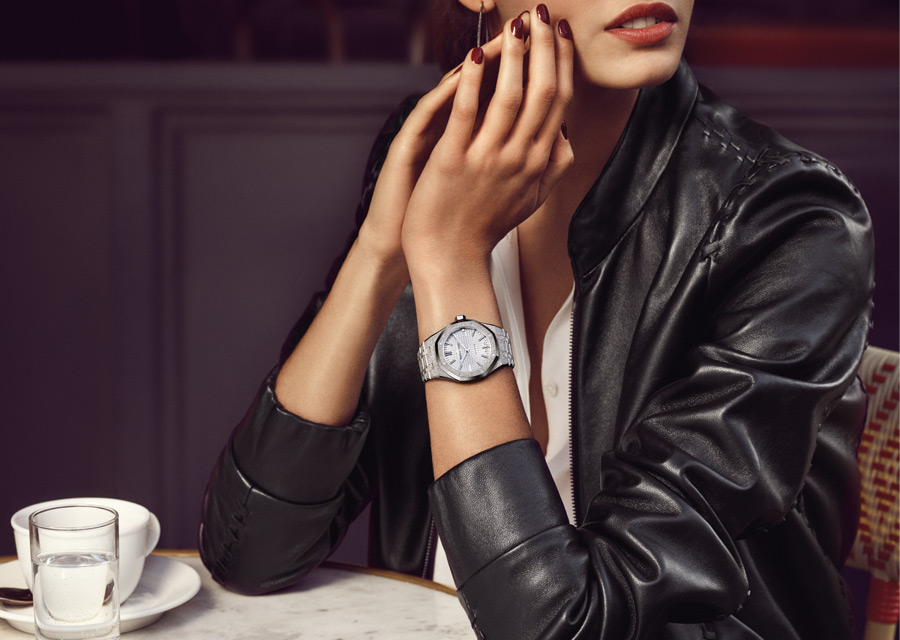 In 2016, the Le Brassus Manufacture honours the style and character of the female designers who have contributed to the Royal Oak legacy: from Jacqueline Dimier who reinterpreted Gérald Genta’s initial 1972 model and imagined the first Royal Oak for women in 1976, to Carolina Bucci today. 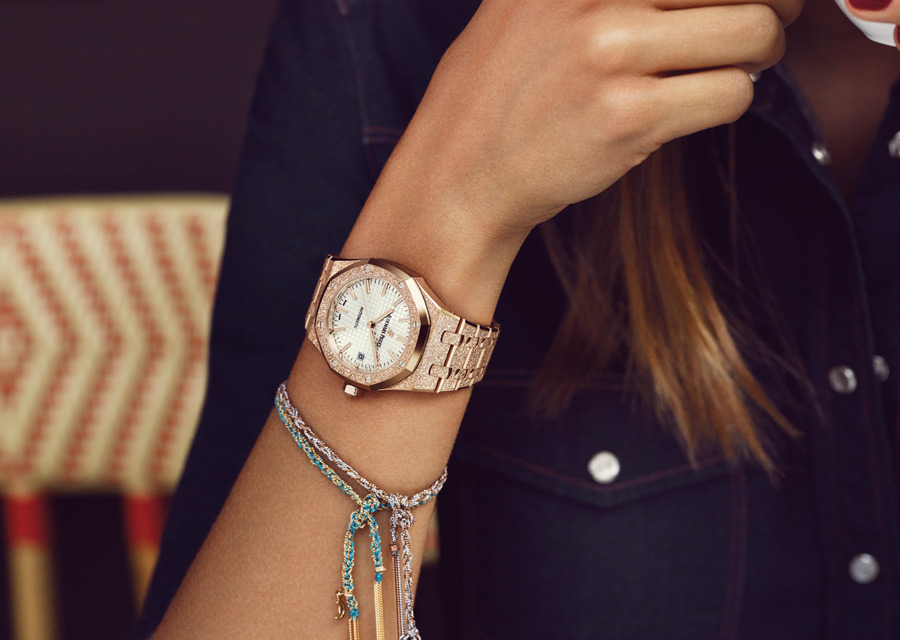 The launch of the Royal Oak Frosted Gold enriches Audemars Piguet’s tradition of experimenting with jewellery techniques. The defining feature of the Royal Oak Frosted Gold resides in its shimmering sparkle, which in turn comes from a surface treatment process rooted in an ancient gold hammering technique, also called the Florentine technique. Carolina Bucci has reinterpreted this technique in jewellery design today while Audemars Piguet’s experts developed it into a horological craft suited to the unique case and bracelet construction of the Royal Oak. 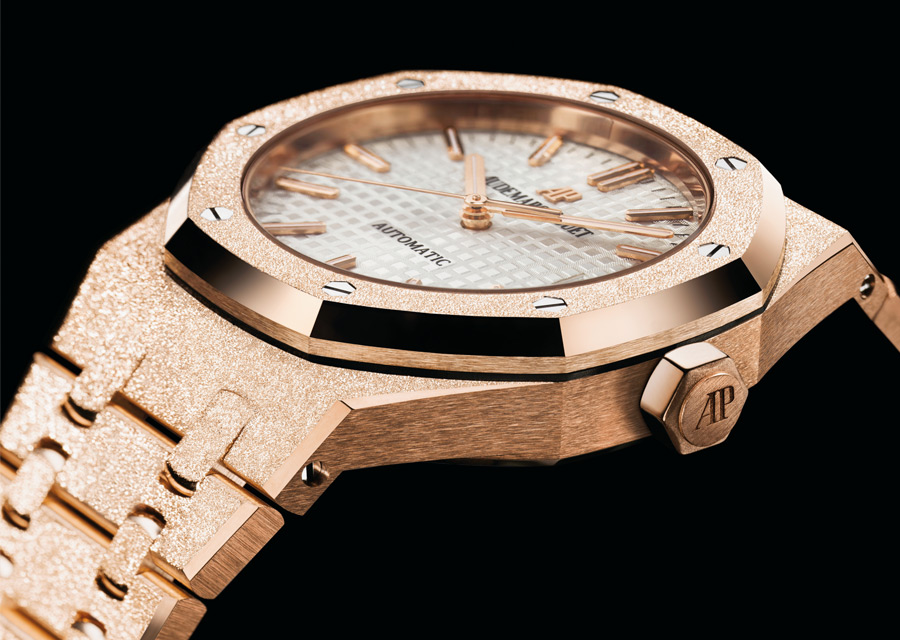 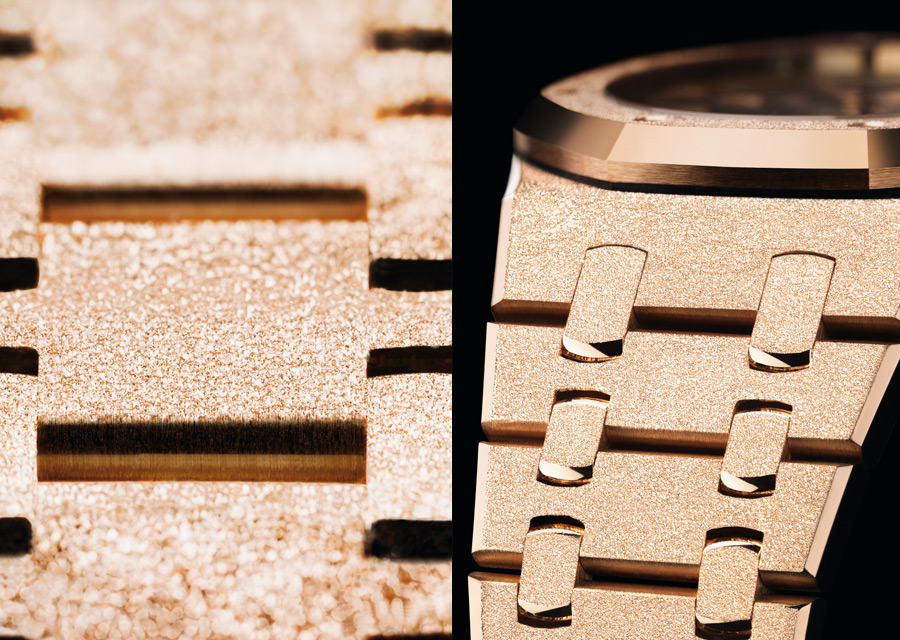 The link between the tactile quality of the Florentine finish and the unique brushed and polished work of the Royal Oak’s case and bracelet – a defining detail of this iconic design – triggered the idea of a collaboration between the two parties.

The Florentine finish has been used in Carolina Bucci’s workshops for decades, predominantly on smaller pieces. By beating the gold with a diamond tipped tool, it creates tiny indentations on the surface that give a sparkle effect similar to that of precious stones, like diamond dust. In recent years Carolina Bucci has been using this effect in a bolder way on large cuffs and pendants, highlighting the finish more than any other part of the design. 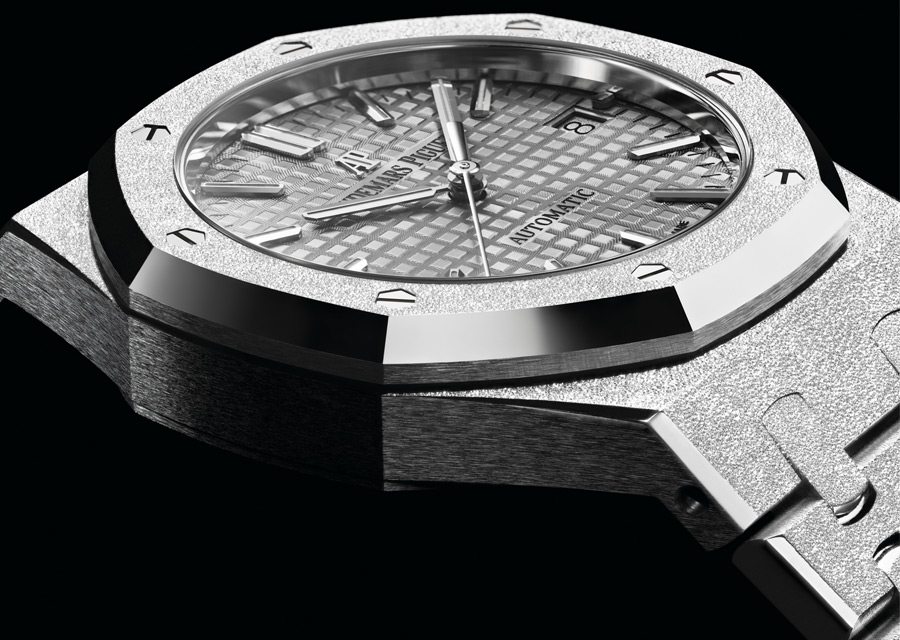 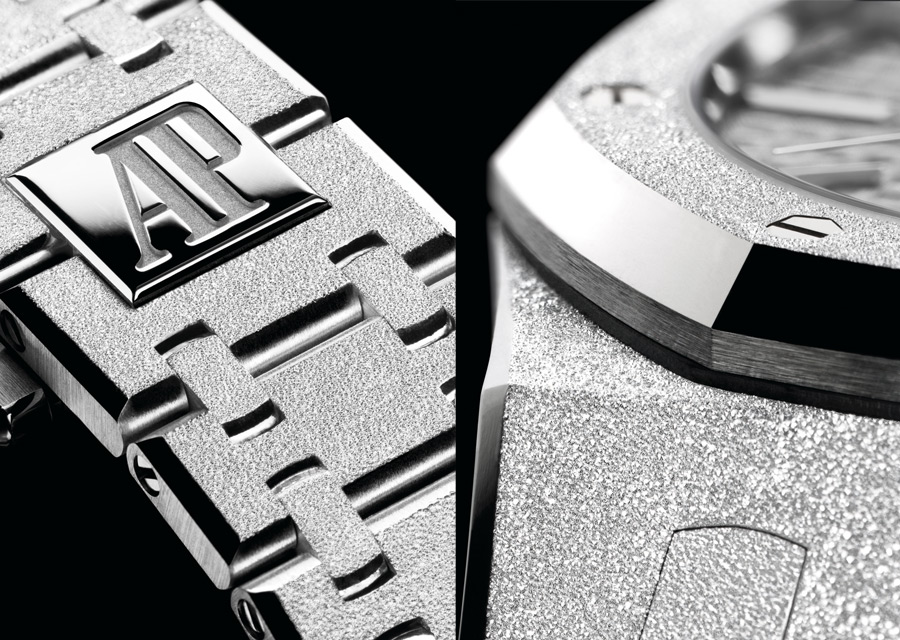 The challenge for Audemars Piguet’s craftsmen was to apply this surface treatment technique across the case and bracelet of the watch without altering the clean lines that define the Royal Oak’s form. Then the original gradating bracelet construction also demanded that the order in which the rest of the finishing (polishing and satin finish) is executed be reconsidered. It took months of trial and error between Bucci’s Florentine craftsmen and Audemars Piguet’s manufacture to alter the surface of the gold in such a way that it sparkles when catching the light, while retaining the softness and flexibility of the Royal Oak’s bracelet. It is a very delicate alchemy to operate: nothing is added, nothing is removed, but the watch is transformed. 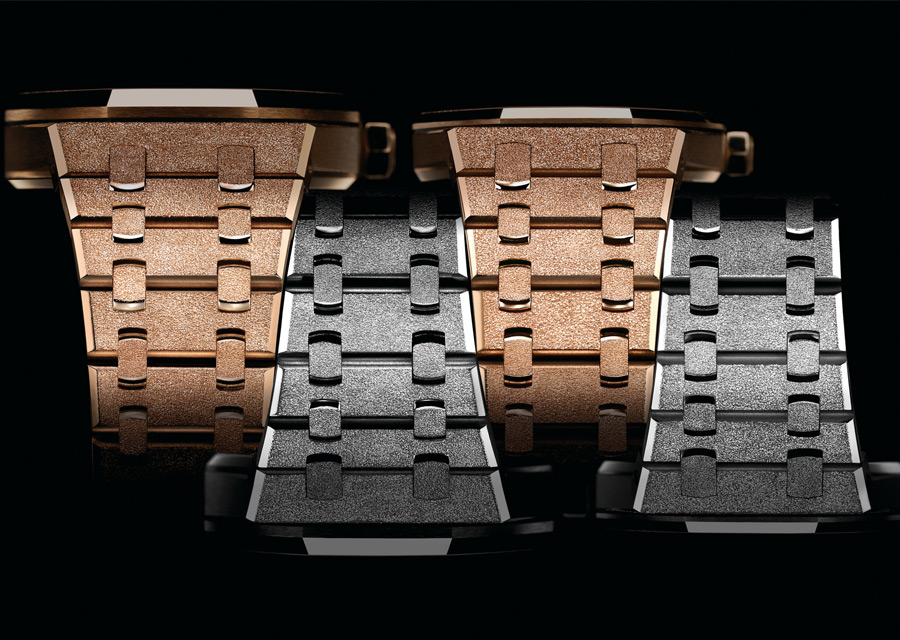 Marking the 40th anniversary of a 1970s house icon, the launch of the Royal Oak Frosted Gold underlines Audemars Piguet’s dedication to an independent view, while celebrating Jacqueline Dimier’s initial creation. As one of the very few female watch designers of the modern era, Jacqueline Dimier shaped the nature of many Audemars Piguet timepieces for both men and women, establishing a lasting design language that still resonates in the Le Brassus Manufacture today.

When she joined as a designer in 1975, Dimier’s first task was to evolve Gérald Genta’s original Royal Oak design into a modern wristwatch for women. Yet, rather than play down its masculine looks, Jacqueline Dimier shifted the approach and played to the Royal Oak’s strong character, adapting its handsome proportions to obtain a lighter, sleeker look.
It is a timely link to the house’s collaboration with Carolina Bucci today whose vision, although decades apart from Jacqueline Dimier’s, was to give the Royal Oak an appeal that captures the attention from a distance, injecting feminine sensibility while retaining the key design codes of the original piece. 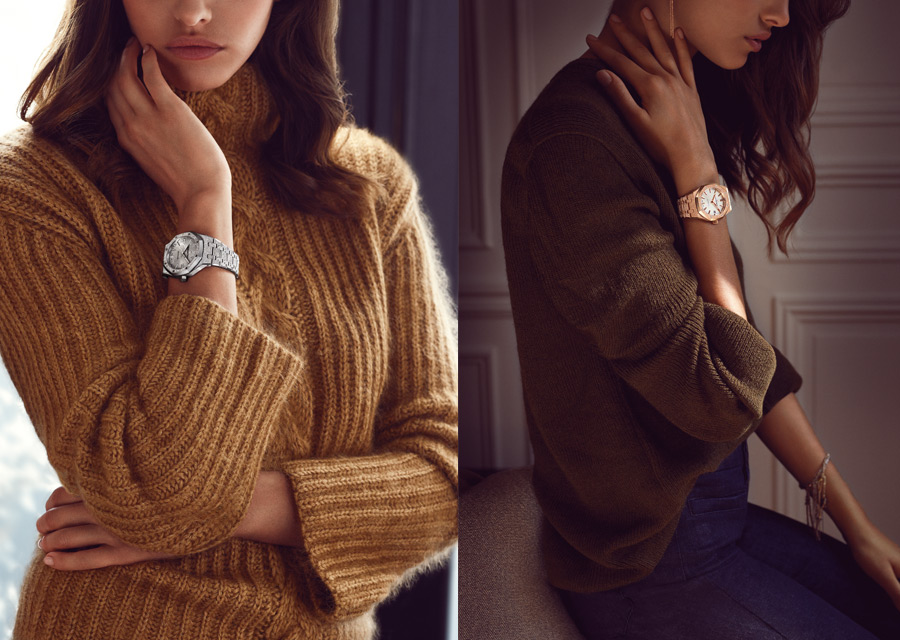 Contemporary of designer Gérald Genta, Jacqueline Dimier remains one of the only named female watch designers of the modern era. Dimier joined Audemars Piguet in 1975 and was appointed in-house head of design shortly after. Among other missions, she successfully developed the Manufacture’s designs, including the Royal Oak, into timepieces in tune with women’s changing tastes. She continued creating and developing iconic watches for Audemars Piguet until 1999. Jacqueline Dimier said she’s “very happy to participate in this launch. The Royal Oak collection is a timepiece that meets women’s taste today like it it did yesterday, and it will continue to do so tomorrow. It’s timeless and the Royal Oak Frosted Gold is the latest chapter in this ongoing story.” 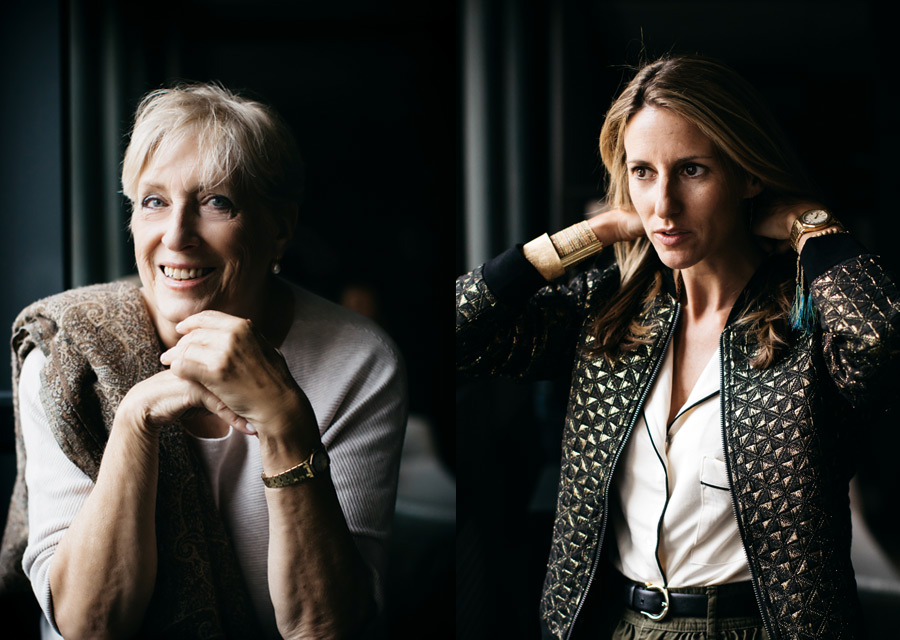 Carolina Bucci is a jewellery designer whose creations are synonymous with a modern and effortless sense of luxury. Her creations are a vibrant re-invention of her family’s rich heritage. Growing up surrounded by jewellery and jewellers, Carolina backed up her desire to design with an education that provided her with the technical know-how necessary to execute her vision, studying Fine Arts and Jewellery Design in New York. Returning to Florence after her studies, she has worked for the past 15 years alongside local goldsmiths, encouraging them to push the boundaries of their traditional practices like the Florentine technique, which was used for her first collaboration with Audemars Piguet on the Royal Oak Frosted Gold in 2016. Carolina Bucci said she “think it is less common for watches to be designed by women, than, say, fashion or jewellery – and that was even truer when Jacqueline Dimier designed the first Royal Oak for women. Everybody knows about the quality and craftsmanship of Audemars Piguet, but perhaps by injecting this feminine sensibility, people see a new side – something a bit more flamboyant and exuberant with just as much attention to detail.” Before precising that “The Royal Oak is one of the most iconic watch designs in existence. That is quite daunting when you are considering how to refresh something aesthetically. I wanted to give the watch a dynamic quality that captures the attention of those who see it. When I think about my jewellery, I think about both the wearer AND those who will see it being worn. By treating the finish of the gold with a Florentine effect, you have added nothing to the watch, nor subtracted anything – just altered the surface of the gold to make it sparkle when catching the light. In doing so, the watch becomes something entirely fresh and confident.”