Bvlgari, a snake charmer. The new Serpenti incantati jewelery watch completely reinterprets the identity theme of the famous Italian brand with a reptilian design with modernity and brilliance of fine jewelry. 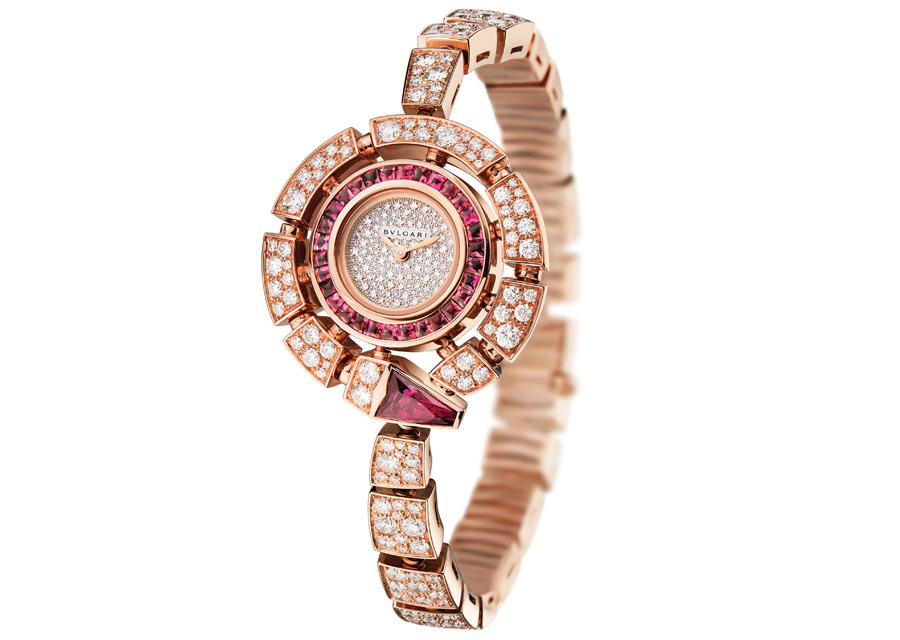 Bulgari presents a 2016 preview of new watch models entirely in tune with its creative universe. The Rome-based jeweller innovates constantly by associating its mastery of precious materials with Swiss watchmaking precision. The new spectacularly flamboyant Serpenti Incantati watch once again highlights the iconic serpent theme in an astonishing way. Bulgari has long since tamed this symbolic and fascinating creature. Incantati means “enchanting” in Italian and Bulgari charms the snake in a whole new way through this spellbinding horological interpretation of Haute Joaillerie. It is also accompanied by an all-new precious dial for the Serpenti line, along with new versions on the Tubogas bracelet.

2016 also sees the introduction of additional new ladies’ watch references, starting with the Diva watch that makes a perfect match with the Haute Joaillerie and jewellery lines bearing the same name. Its sleek, elegant design conceals an unprecedented technical feat in the articulation between the watch and its bracelet. The shaped fan motif – inspired by ancient Rome and on which the jewellery collection has built its success – now adorns the 30 mm dial of two new precious versions. Bulgari once again successfully blends Swiss watchmaking and Italian jewellery in a ‘grand evening dress’ model, also available in a second version with an acetate dial. The fan securing the wristband is its unmistakable signature.

In addition, Bulgari treats active women to a very appealing new model with the Piccola Lucea. This new version of its successful Lucea watch has been redesigned in a daintier diameter. It thus meets the growing demand for smaller ladies’ watches, making it a model designed for daily wear but which can also be worn as a piece of jewellery in the evening, like all Bulgari creations.

Bulgari naturally does not neglect men and is exploring new watchmaking territories. The Octo watch thus appears this year in a highly contemporary black-clad version. This approach further accentuates its power and its singularity, forcefully affirming the personality of this watch featuring a unique and remarkable design.

These new models naturally chime with the Italian culture pervading the brand, an identity continually reinforced by the array of exceptional Haute Horlogerie and Haute Joaillerie skills perfectly mastered by Bulgari for more than 130 years. Inventiveness and boldness thus join forces in shaping a refined vision of watchmaking.

THE ENTRANCING CHARM OF HAUTE JOAILLERIE 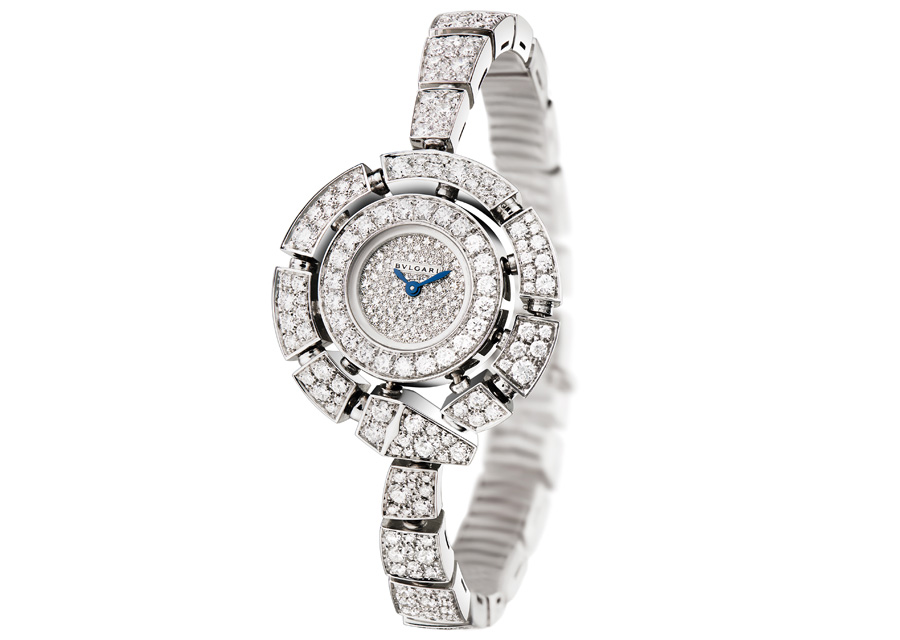 The Bulgari jeweller is a snake charmer. The precious new Serpenti Incantati watch entirely renews this theme through a modern design and a radiant Haute Joaillerie interpretation.

Serpenti Incantati is an enchanting reptile, a snake so beautiful that it is never fearsome. It traditionally belongs to the bestiary of Ancient Rome and has long since been successfully tamed by the Roman jeweller Bulgari. In finding its way into the watch collections of the Italian Maison, it has become a watch by concealing a secret dial and a high-precision Swiss movement inside the serpent’s head. The snake now appears a new guise by taking on the shape of a round watch case.

This new horological creation is extremely original. For the very first time, the reptile coils around the watch dial. Each part of the head and body of the snake has been entirely rethought and redesigned with extremely contemporary lines. “They are very soft and stylised. While Bulgari domesticates the snake, the latter nonetheless appears to be in perpetual motion. Therein lies the secret of this watch,” notes designer Fabrizio Buonamassa Stigliani. Four choices are possible, since the Serpenti Incantati watch comes in a rubellite or diamond version, each expressed through two different interpretations.

The primary source of inspiration for this jewellery watch was a vintage brooch crafted in the 1930s Bulgari Haute Joaillerie ateliers. In revisiting this jewellery creation, the Roman Maison testifies to the strength for the future represented by its incredibly rich heritage.

Bulgari is also presenting two other jewellery watches on the Serpenti theme this year, both in limited editions. The double wrap-around bracelet and the head are set with diamonds, while emerald or ruby eyes give the entrancing serpent a deeply disturbing gaze. The colours of these models are created by intense lacquers: one of the versions plays with the sombre magic of black, while the other one coils a deep emerald green around the entire bracelet, in contrast with the glittering ruby red eyes.

These two beautiful contemporary tributes to historical models also testify to this motif’s enduring ability for self-renewal, thanks to the permanent and inspired creativity nurtured by Bulgari. At over 60 years’ old, this snake is more modern than ever.

Alongside the snake theme, Bulgari is also reinterpreting another of its symbols: the Tubogas bracelet. 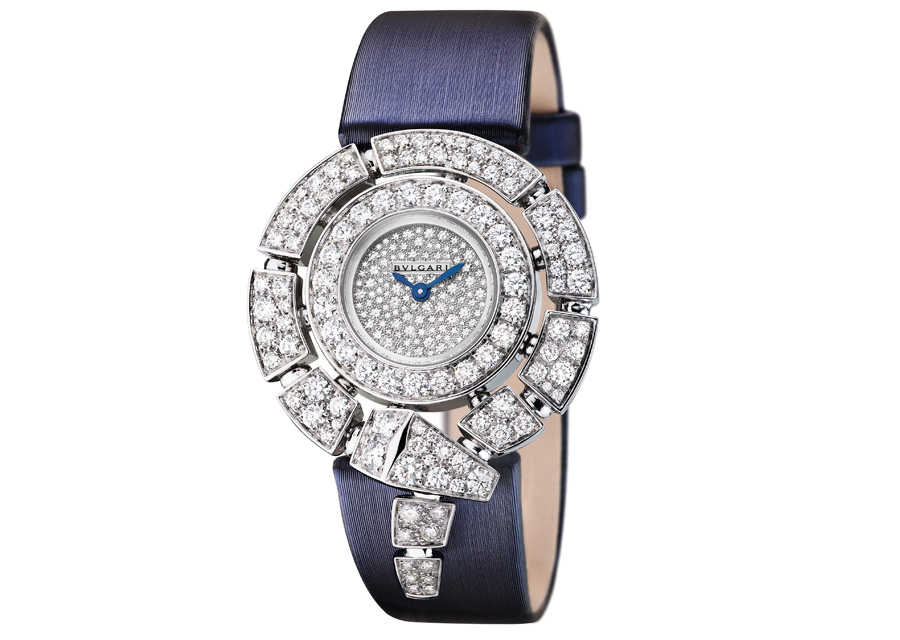 Two executions of the Tubogas bracelet are offered: one has the radiant gleam of polished steel, a material that exalts the architectural and technical nature of the articulated bracelet. The other plays on the combination of shimmering chrome and gold reflections, demonstrating Bulgari’s characteristic mastery of matter in general and of metals in particular. 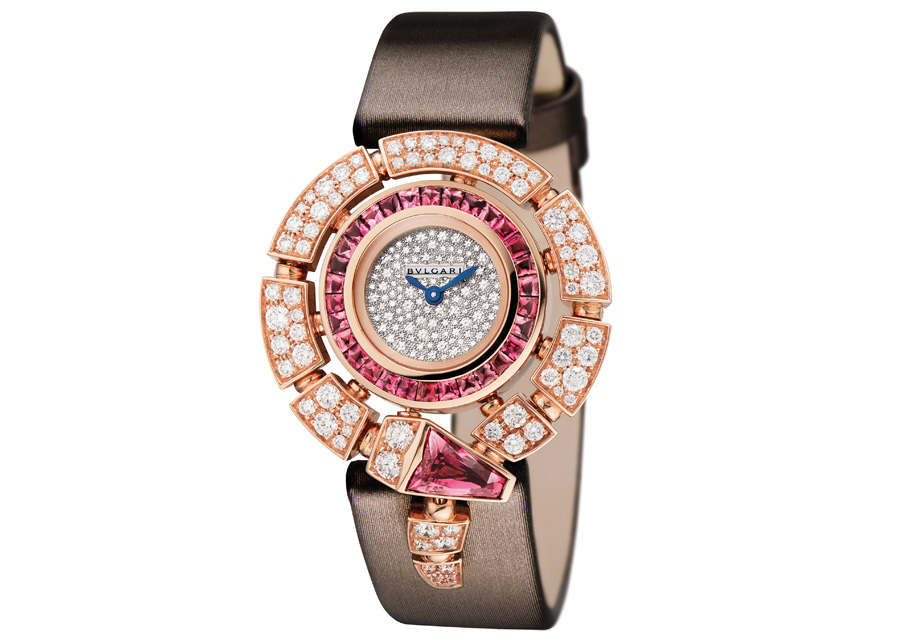 Thus named in reference to the modernistic, industrial aesthetic of the flexible piping featured in sports car exhaust manifolds during the Art Deco period, the first supple Bulgari jewellery models appeared in 1932. The jeweller soon afterwards also created a distinctively styled watch collection unique in its kind. The bracelet sensuously wrapping itself twice around the wrist is the key asset of the new timepieces. It testifies to a specific Bulgari technical skill that consists in assembling gold or steel ribbon-like strips with clean-cut rounded contours around a core spring, without any soldering. In 1962, when filming scenes for Cleopatra, Elizabeth Taylor had to be careful to remove her favourite gold watch with its diamond-paved snake’s head and tail. This was of course to avoid any anachronisms, since the Queen of Egypt was not yet acquainted with the pleasure of reading the time on her wrist.

Ever since, popular enthusiasm has remained intact for this unique watch. Unique, but never uniform, since Bulgari regularly renews the interpretation of these watches that are one of its creative signatures.