Like the historical pilot’s watches, the new Rolex Air-King has an internal anti-magnetic protection and has an oversized minutes scale providing optimal navigational time readings. Featuring at 6 o’clock a stylized “Air-King” identical to the model of the 1950s, this new instrument Oyster Perpetual in steel is COSC certified and carries the Superlative Chronometer certification redefined by Rolex in 2015, which ensures singular performance. Extented to all references of the manufacture in 2016, this certification guarantees outstanding performance: precision (-2 / + 2 seconds per day), waterproofness, power reserve and self-winding. The Superlative Chronometer status is symbolized by the green seal that comes with every Rolex watch and is coupled with an international five-year guarantee. 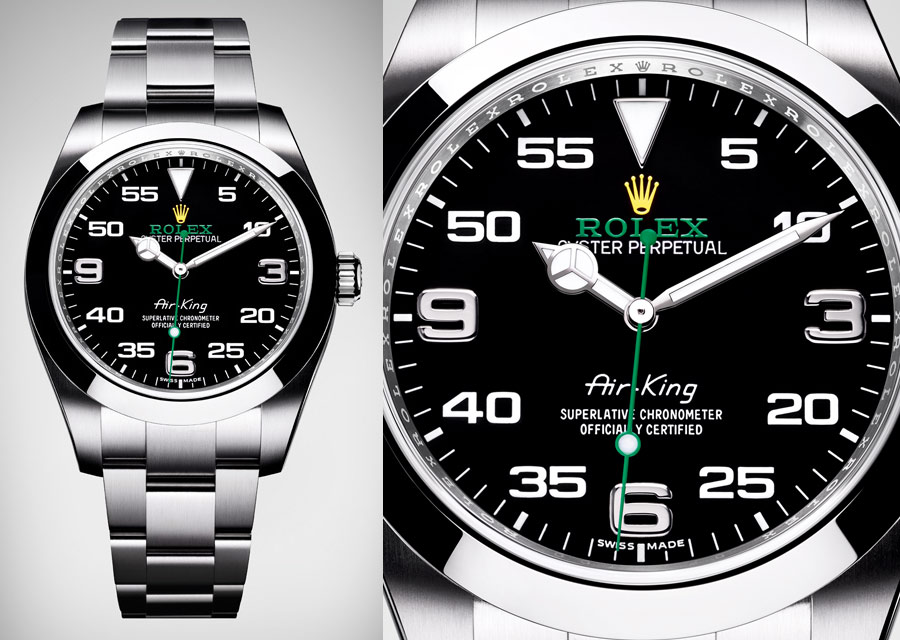 A HOMAGE TO AVIATION

The new Air-King epitomizes Rolex’s privileged ties with the world of aviation during its golden age in the 1930s. It was a period when spectacular progress in aircraft performance constantly expanded humanity’s capacity to conquer the skies, and led to the introduction of long-distance flights. One of the pioneers of this era, English aviator Charles Douglas Barnard, set a number of flight records. Of the Oyster, he said: “The peculiar qualities of this Rolex watch render it eminently suitable for flying purposes and I propose to use it on all my long-distance flights in the future”. In 1933, Oyster watches accompanied the Houston Expedition as it made the first-ever flight over Mount Everest at an altitude exceeding 10,000 metres (33,000 feet) in extreme weather conditions. In 1934, Owen Cathcart-Jones and Ken Waller made a return voyage from London to Melbourne (Australia) in record time with a twin-engine De Havilland Comet, using a Rolex Oyster as their on-board chronometer. Today’s new Air-King pays tribute to the pioneers of flight and the Oyster’s role in the epic story of aviation. 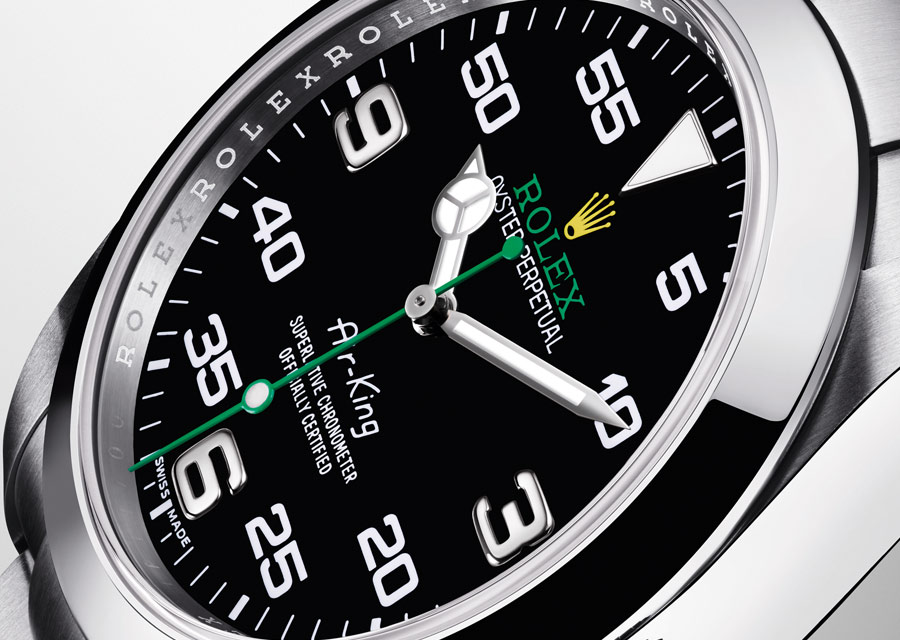 THE OYSTER CASE, SYMBOL OF WATERPROOFNESS

The Air-King’s Oyster case, guaranteed waterproof to a depth of 100 metres (330 feet), is a paragon of robustness. Its characteristically shaped middle case is crafted from a solid block of particularly corrosion-resistant 904L steel. The fluted case back is hermetically screwed down with a special tool that allows only Rolex watchmakers to access the movement. Fitted with the Twinlock double waterproofness system, the winding crown screws down securely against the case. The crystal is made of virtually scratchproof sapphire. The waterproof Oyster case provides optimum protection for the Air-King’s high-precision movement and is also fitted with a shield to protect against magnetic fields, a feature of pilots’ watches of the past. 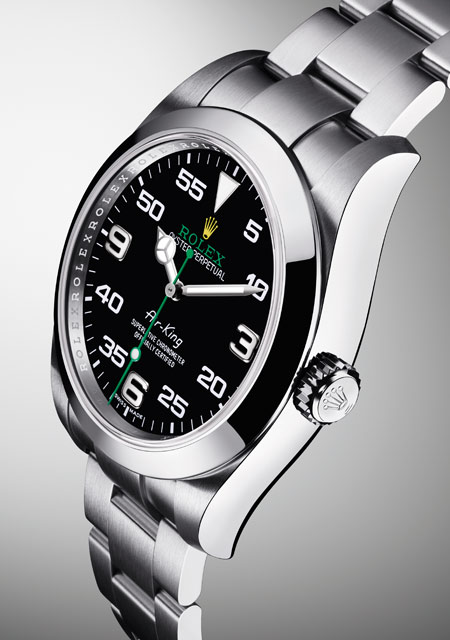 The Air-King is equipped with calibre 3131, a self-winding mechanical movement entirely developed and manufactured by Rolex. Its architecture, manufacturing quality and innovative features make it singularly precise and reliable. The oscillator, the true heart of the watch, has a blue Parachrom hairspring patented and manufactured by Rolex in an exclusive alloy. Insensitive to magnetic fields, the Parachrom hairspring offers great stability in the face of temperature variations and remains up to 10 times more precise than a traditional hairspring in case of shocks. It is equipped with a Rolex overcoil, ensuring its regularity in any position. The escapement features a paramagnetic escape wheel made from a nickel-phosphorus alloy produced via UV-LiGA (micromanufacturing by electroforming). Calibre 3131 is equipped with a self-winding module featuring a Perpetual rotor and boasts a power reserve of approximately 48 hours.

The Air-King is fitted on a solid-link Oyster bracelet in 904L steel with a folding Oysterclasp. This bracelet features the ingenious Rolex-patented Easylink rapid extension system that allows the wearer to easily increase the bracelet length by approximately 5 mm, for additional comfort in any circumstance. 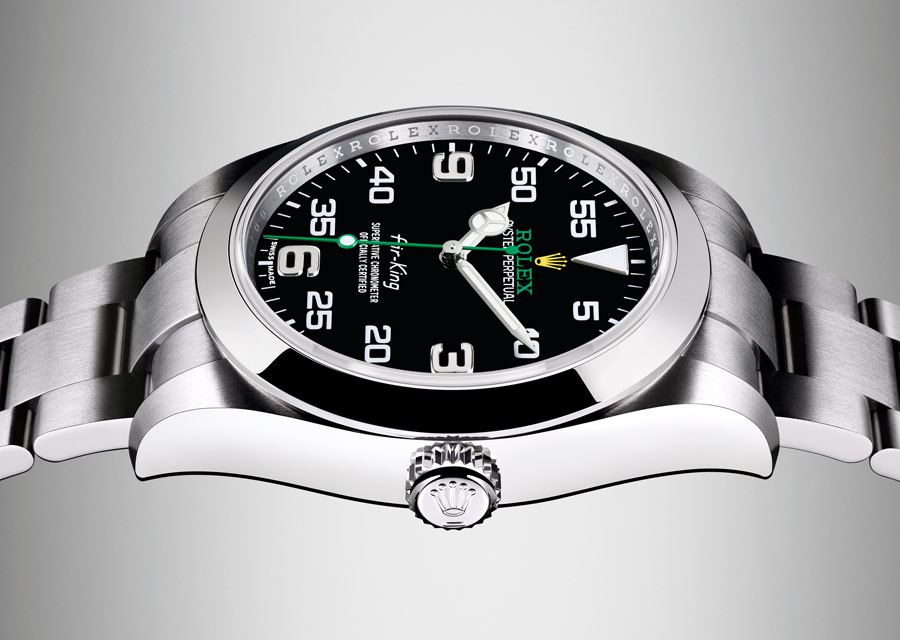 The Air-King is covered by the Superlative Chronometer certification redefined by Rolex in 2015. This exclusive designation testifies that the watch has successfully undergone a series of tests conducted by Rolex in its own laboratories according to its own criteria, which exceed watch making norms and standards. The certification applies to the fully assembled watch, after casing the movement, guaranteeing its superlative performance on the wrist in terms of precision, power reserve, waterproofness and self-winding. The precision of a Rolex Superlative Chronometer after casing is of the order of −2/+2 seconds per day, or more than twice that required of an official chronometer. The Superlative Chronometer status is symbolized by the green seal that comes with every Rolex watch and is coupled with an international five-year guarantee.