The Heritage Black Bay family is growing with the arrival of the new Heritage Black Bay Bronze model, a 43 mm divers’ watch inspired by the brand’s history and ﬁtted with a mechanical movement developed, manufactured and assembled by TUDOR.

The characteristic elements of the new Heritage Black Bay Bronze model’s personality have been drawn from TUDOR’s history. It inherits the general lines, as well as the dial and domed crystal, from the very ﬁrst TUDOR diving watches. It features the particularly prominent winding crown from the famous 7924 refer ence of 1958, known as Big Crown. It borrows the characteristic angular hands, known as snowflake, from the watches delivered in large quantities to the French National Navy in the 1970s.

The drilled holes on the side of the lugs and their particularly pronounced chamfering can be added to the list of notable historic design elements adopted in this new model. 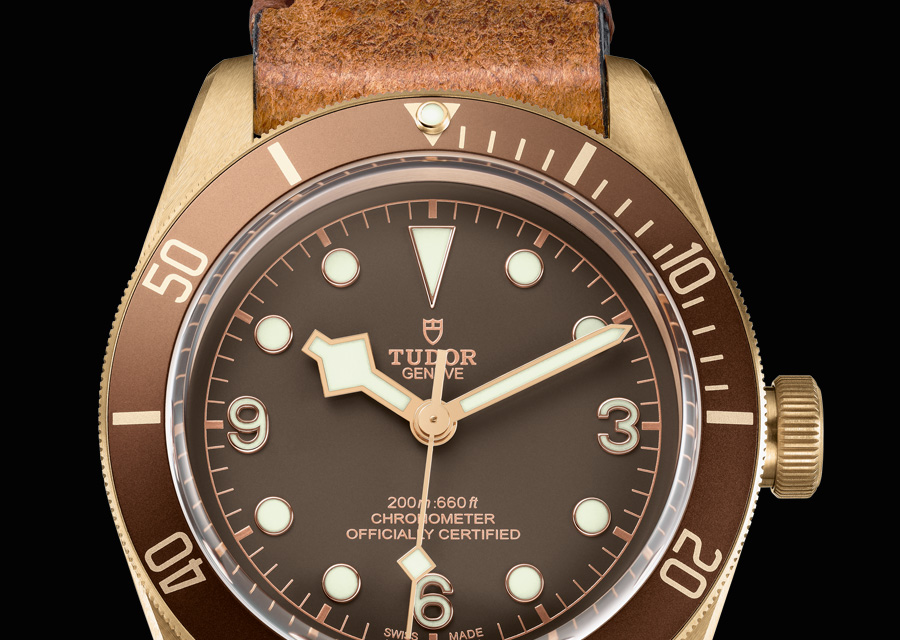 The characteristic element of the Heritage Black Bay Bronze is an imposing bronze case, 43 mm in diameter, which is an aesthetic reference to the use of bronze in historic ships and other diving equipment. The choice of this metal, a high-performance aluminium bronze alloy, guarantees the development of a subtle and unique patina to match its user’s habits. In addition to a highly functional appearance in line with the world to which it pays tribute, the Heritage Black Bay Bronze has entirely brushed ﬁnishes that guar an tee a homogeneous development of the patina.

A combination of chocolate-brown dial and bezel – a ﬁrst for TUDOR – with golden and beige accents, completes the model’s look. The visual effect is that of a patinated object that could have battled the waves on its owner’s wrist for many years, and seems to have been fashioned by him and his lifestyle.

This is a variant of the TUDOR manufactured movement developed specifically to equip the Heritage Black Bay Bronze model. Slightly larger in diameter and displaying hours, minutes and seconds functions, it bears the reference MT5601, in which “MT” stands for “Manufacture TUDOR”.

In 2015, TUDOR announced the first mechanical move ment in its history to have been developed, manufactured and assembled in-house. A high-performance calibre of excellent precision and proven robustness, it offers a 70-hour power reserve meaning that its wearer can, for example, take off the watch on Friday evening and put it on again on Monday morning without having to wind it. Beating to a frequency of 28,800 beats/hour or 4 Hz, the movement is regu lated by a variable inertia oscillator with silicon balance spring, held in place by a traversing bridge – a guarantee of its robustness. Furthermore, the movement is certiﬁed by the Swiss Ofﬁcial Chronometer Testing Institute (COSC).

TUDOR has identiﬁed the historic uses of its watches and reinterpreted them in its latest models. For example, the French Navy had TUDOR watches delivered without bracelets and then fitted them with their own straps, handmade or otherwise. One of them, found on a period watch, is made of elastic recovered from a French rescue parachute. It is from this ultra-functional relic, recognisable by its central yellow thread, that the beige and brown woven jacquard strap ﬁtted to the Heritage Black Bay Bronze descends. In line with the characteristics of the Heritage line, it is ac com panied also by an aged brown leather strap whose angled cut accentuates a rustic effect. 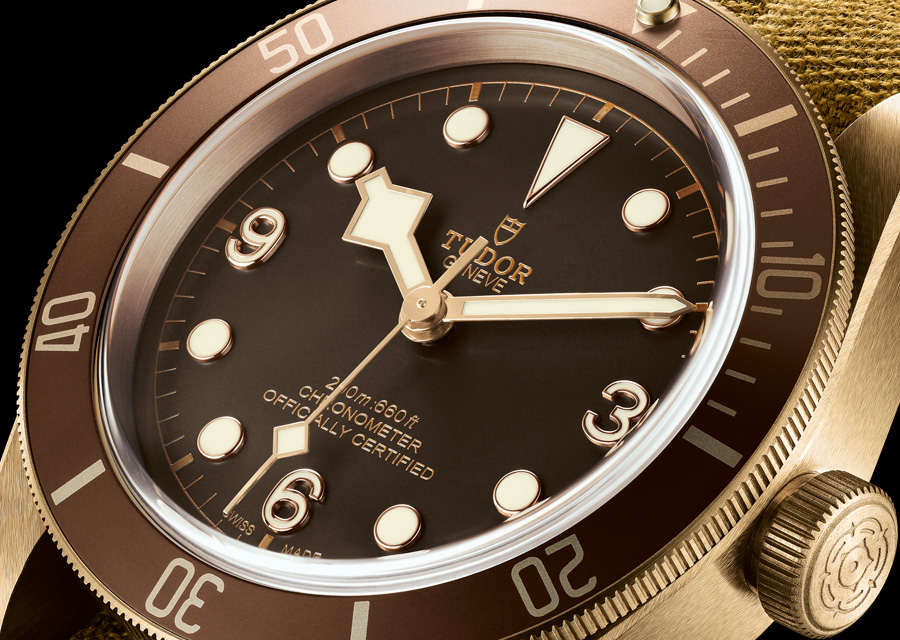 The history of the TUDOR divers’ watch dates back to 1954 and the launch of reference 7922. The ﬁrst in a long line of ergonomic, legible, accurate and robust divers’ watches, it perfectly embodies the approach formulated by the American architect Louis Sullivan, according to whom the form of an object must follow its function. Furthermore, it laid down the aesthetic and technical foundations of an ideal divers’ watch, those of an understated, functional and reliable tool.

The sixty years that followed the launch of the original 7922 saw the constant improvement of the TUDOR divers’ watch and each model gained unanimous acclaim from professionals in the ﬁeld, including some of the greatest military navies in the world. It is this relationship with these navies which evokes ideas of travel and adventure that the Heritage Black Bay Bronze celebrates. 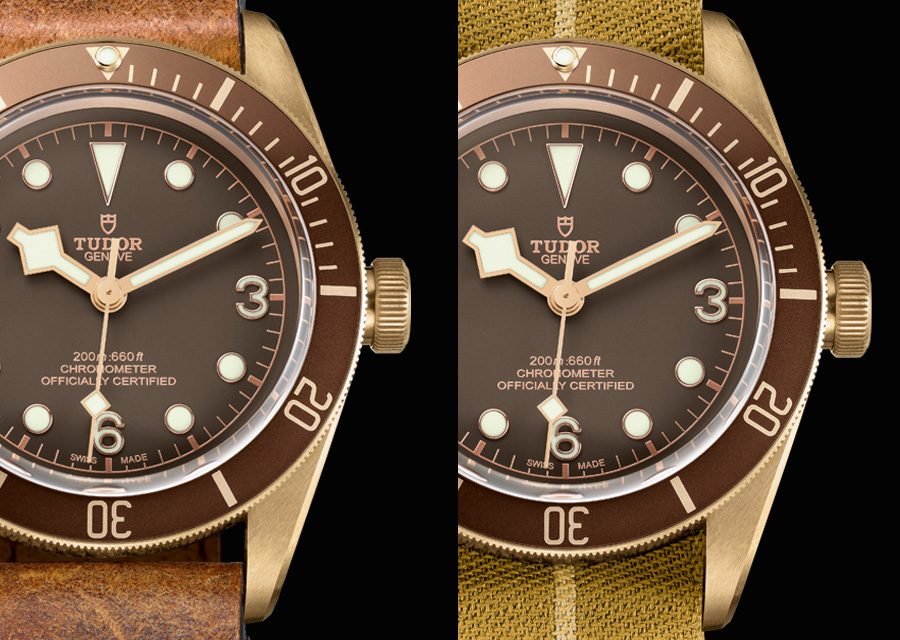 A key characteristic of the TUDOR Heritage line is the unique creative process that began in 2010 with the presentation of the TUDOR Heritage Chrono model, a free interpretation of the brand’s ﬁrst chronograph dating from 1970. Since then, some of the most import ant references in the history of TUDOR have been reworked within the Heritage line. Far from simply being an identical re-release of a classic, the models in this line bring together the past, present and future, with the aesthetic codes that contributed to the repu ta tion of historic models preserved and instilled into contemporary timepieces. The new Heritage Black Bay Bronze adopts this approach, offering a new reading of the history of the TUDOR divers’ watch.