One century ago appeared a timepiece which was going to be a part of watch’s History and become a real icon : the Tank. Since 1917, this symbol from Cartier has never ceased reinventing itself through the time in numerous version. The celebration of its 100 years is accompagned by new declinations. 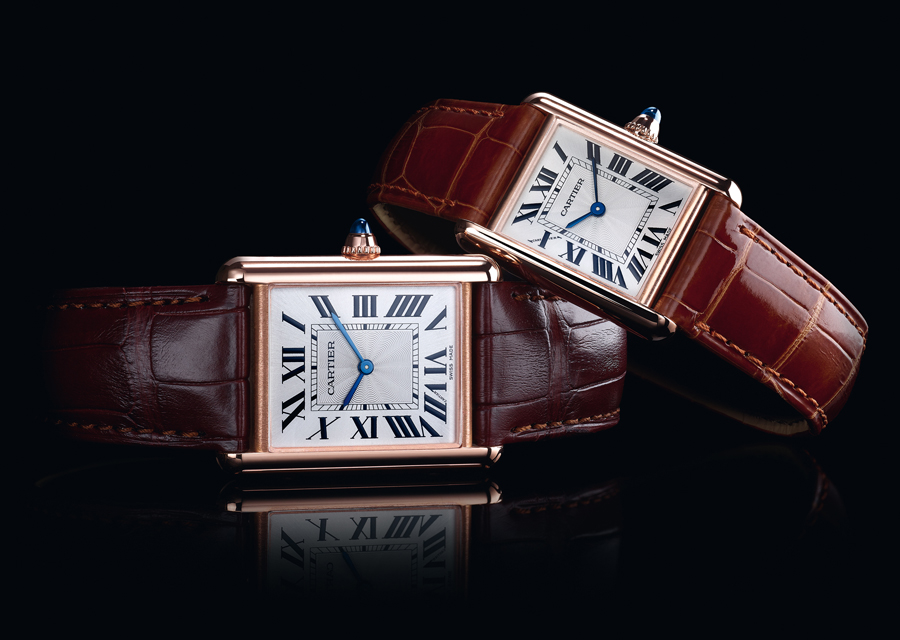 The Tank watch was born in 1917 of a powerful vision, the culmination of a lengthy design process. It was a timepiece which swept aside tradition, shook up habits and ushered modern design into the workshops, destined to become a watchmaking icon.

Now 100 years old, the Tank watch has never been so new. For free spirits from every age, it is a universal symbol of style and elegance that has taken an unprecedented path spanning an entire century. While bridging different eras, it gives rise to a resolutely modern way of life centred around three cult models: the Tank Louis Cartier, the Tank Américaine and the Tank Française.

Tank is a legend

As a serious collector well-versed in classic style, Louis Cartier developed his own jewellery aesthetic and deliberately distanced himself from the Art Nouveau style. From 1904 onwards, his jewellery designs were characterised by geometric lines and abstract forms; Cartier had pioneered the avant-garde or modern style known as Art Deco.

At the same time, Cartier watchmaking was enjoying a booming trade. Louis Cartier was the force behind the introduction in 1904 of this watch, designed to be worn on the wrist, which caused a sensation in the world of watchmaking. Sensing the potential for success, Cartier soon grasped that this invention would transform the very nature of the watch and overturn the landscape of the watchmaking business. The wristwatch seen by Cartier would become an essential accessory, as functional as it was elegant.

Squaring the circle… The early years of the 20th century were dedicated to formal research into aligning the circle (of the hours) with the strap and paring down the design. The ultimate goal was seamless integration of the lugs and the case as an extension of the strap. The project of the Tank watch was designed in 1917 and took its place as a reference model in watchmaking. The strength of the design lay in its dramatic break with the elaborate curves fashionable at the time and the exercise of restraint in its form. The story goes that Louis Cartier himself modelled the design of the Tank watch on the top view of a tank: the brancards evoked the treads and the case represented the cockpit of the vehicle.

Tank is a design

The hours are shown in Roman numerals on the majority of Tank watches. When used in combination with the chemin de fer chapter ring, they lend a heightened graphic impact to the dial.

Chemin de fer is the term for the double line on the dial that represents the chapter ring. The design evokes train tracks. An unmistakable Cartier signature, this graphic crops up throughout the dials of Tank watches.

Brancards are the parallel and vertical bars on the side of the Tank that incorporate the lugs of the strap. The harmonious blending of the case and lugs signalled a unique stylistic leap forward within the field. This crowning achievement for the newly invented wristwatch was the culmination of years of deliberation and research.

Set with a sapphire cabochon, the winding crown is beaded or faceted.

The Tank is a universal watch. Its shape, as if governed by a golden ratio, is not quite square, not quite rectangular. By turns masculine and feminine, the Tank asserts that freedom and elegance have no gender. Loved by men and women of all generations, it is the ultimate eternally contemporary watch, made beautiful by its judicious proportions.

Tank is state of mind

From Gary Cooper to Andy Warhol, from Madonna to Catherine Deneuve, the Tank watch is worn like a code, a tacit allusion. Since the very beginning, it has appealed to free-spirited men and women – free to appreciate its fine, understated design, enhanced by harmonious lines; free to choose a watch for its perfectly proportioned composition rather than the status it symbolises. These visionary admirers sensed the power that emanated from this creation and formed a special bond with it. Countless anecdotes and quotations testify to its power of attraction. 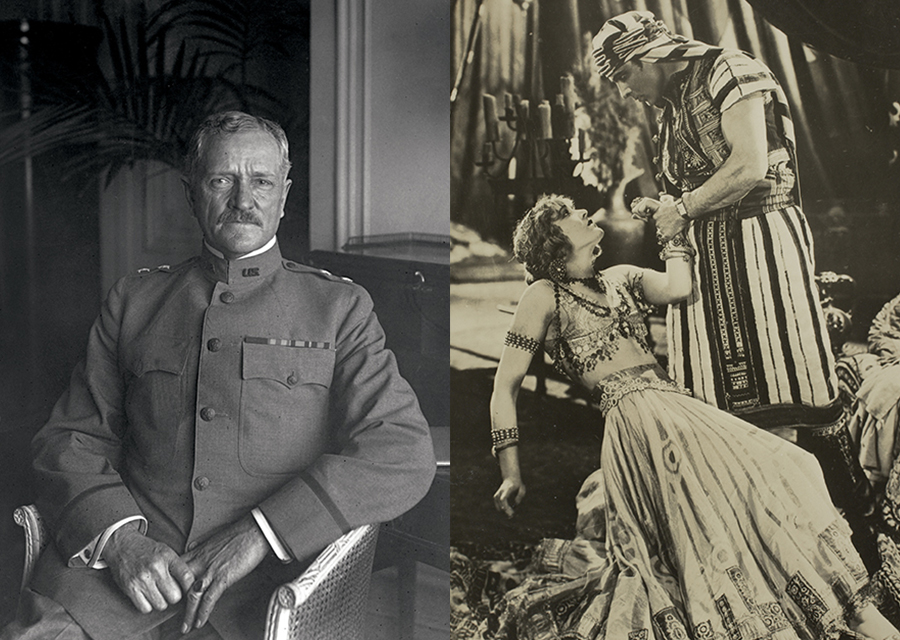 For his final cinematic appearance, in George Fitzmaurice’s The Son of the Sheik, Rudolph Valentino demanded that he be able to wear his Tank watch in every scene. This delightful cultural discrepancy can be seen today in stills from the film: the great seducer in traditional Middle Eastern attire with his favourite watch on his wrist. This was the Tank’s first cinematic role.

According to the Maison, the story goes that Louis Cartier offered one of the first models of the Tank watch to General John Pershing – the commander of the American Expeditionary Force in Europe during the First World War – as a token of thanks. 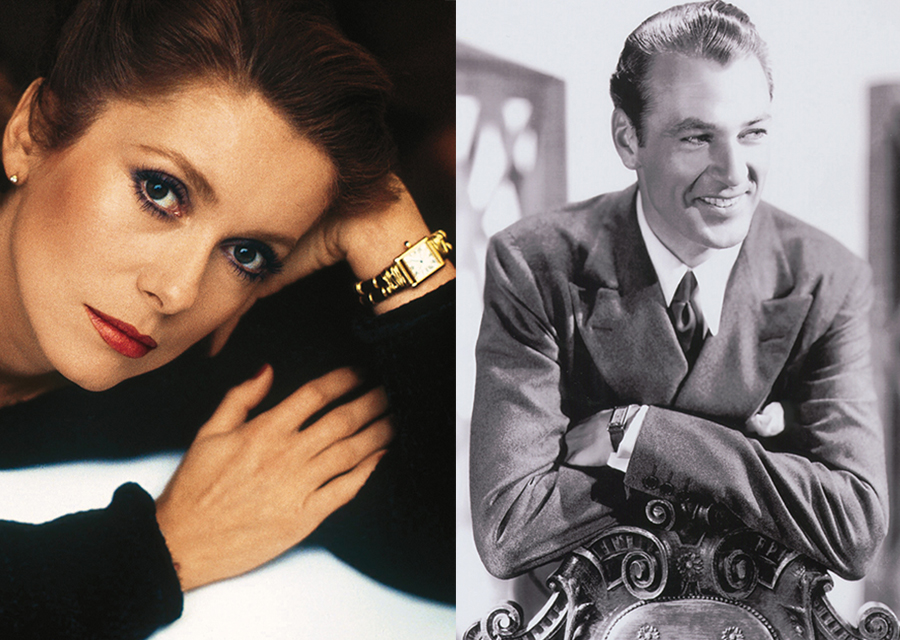 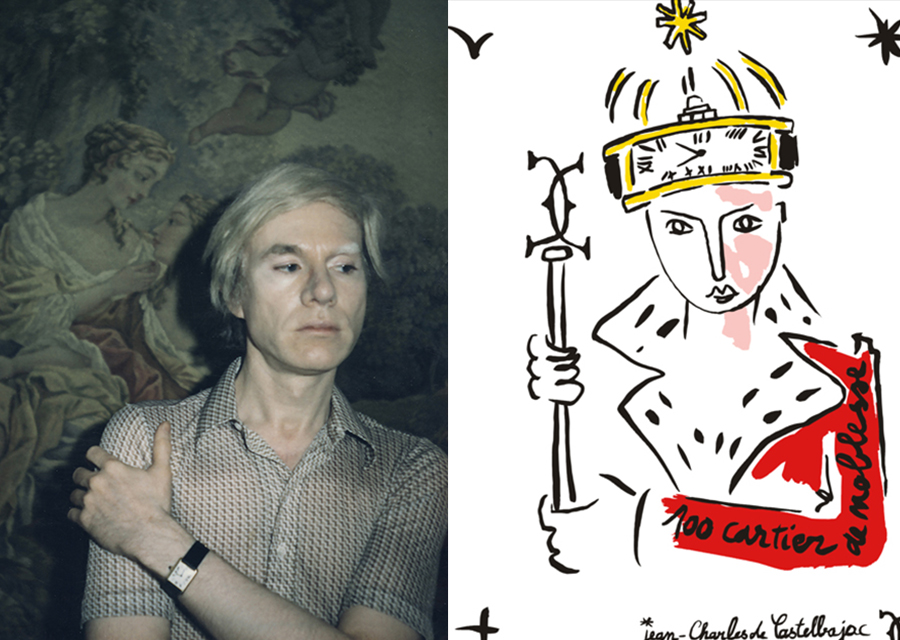 This American painter, Pop Art figurehead and legend of the New York scene, had a talent for standing out. He wore his Tank watch but never wound it: “I really don’t wear it to tell the time…” he admitted once during an interview.

French designer Jean-Charles de Castelbajac paid a political yet poetic tribute to the Tank watch in French weekly Madame Figaro: “If all Tanks were made by Cartier, we would have time to live in peace!”

First created in 1922, the Tank Louis Cartier symbolises the quintessential Tank spirit. In a distinctive design that spans the century, the Louis Cartier watch features brancards with proud, taut lines, softened corners and horns incorporated into the case. Clear-cut lines and a strict, measured composition forge the powerful style and character of this pure, enduring and timeless creation. Today the model offers two new faces, both powered by the 8971 MC mechanical movement with manual winding: a choice of pink or white gold in a women’s watch with diamond-set brancards or a fine, elegant pink gold model, a chic, incontrovertibly Cartier creation. 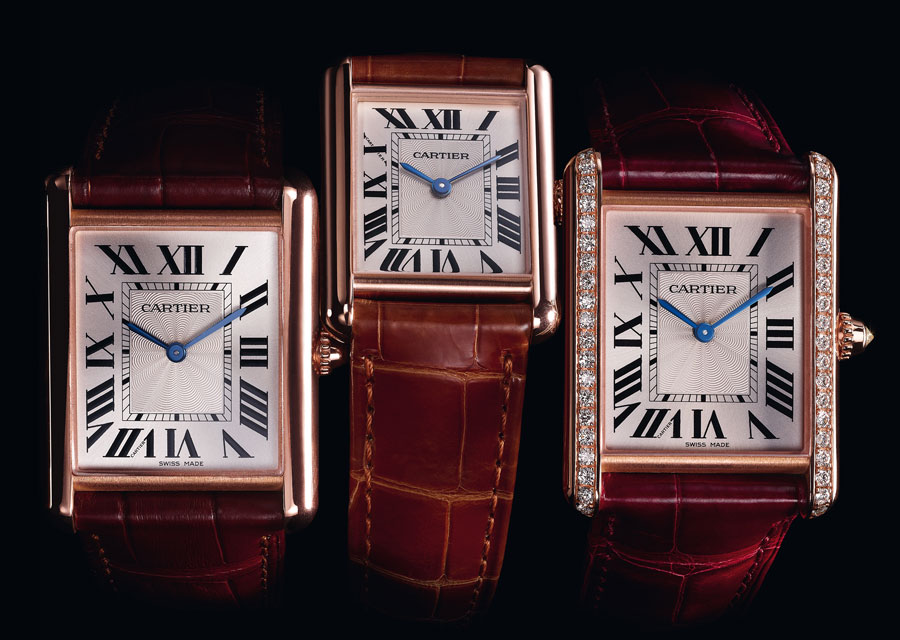 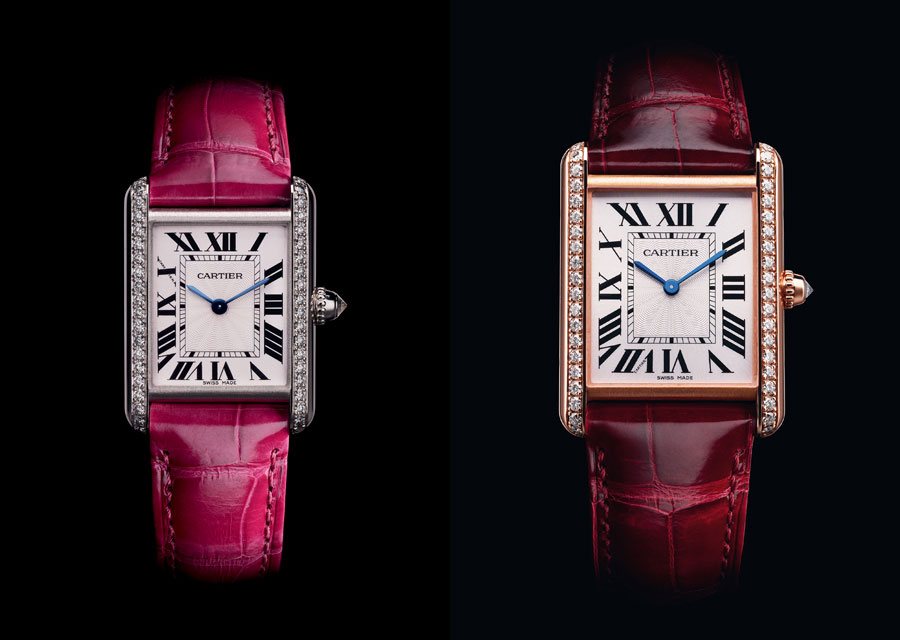 When created in 1996, the Tank Française transformed the stylistic features of the Tank watches. The case was attached to a metal bracelet, thereby reconfiguring the design of the side brancards, dial with Roman numerals, “rail-track” minute circle, sword-shaped hands and faceted winding crown adorned with a sapphire cabochon. The shape asserts itself in the curved case and bracelet, which form a seamless continuity of lines, volume and material. 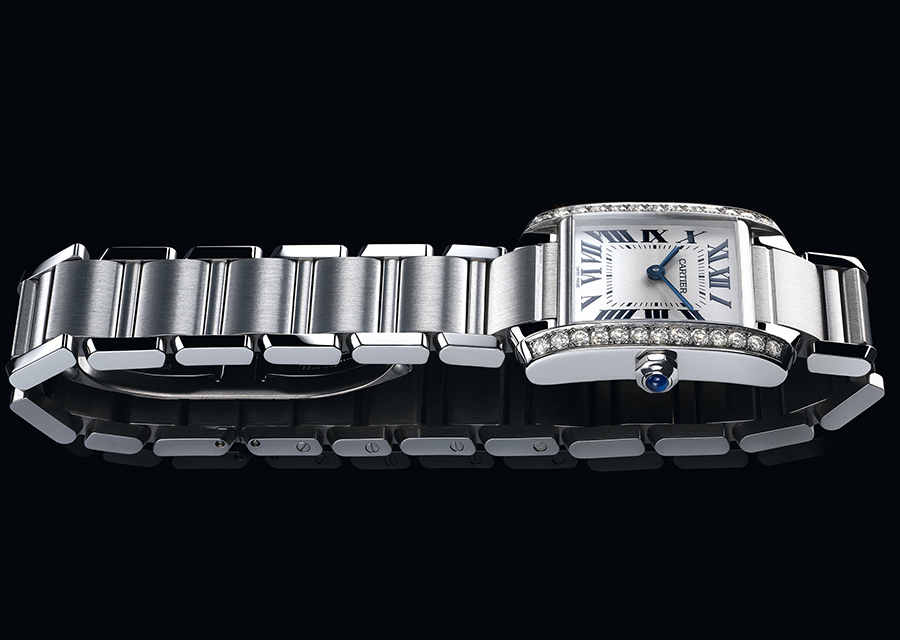 Its geometry is simultaneously softened and strengthened by bevelled brancards and the concave curves of the links: radical lines produced by watchmaking finishes. This practical yet attractive wristwatch has now been liberated, free to combine the purity of steel with a diamond setting.

Designed in 1987 and launched in 1989, the Tank Américaine updates the curved case of the 1921 Tank Cintrée watch: the rectangular shape becomes more compact, while the brancards are rounded. The power and elegance of its elongated, slightly convex form make it a classic – a smart watch which asserts its strength. It can be seen as an homage to the very first Tank watch given to General Pershing. Combining watchmaking and style, it plays with geometry, alternating stark and softened edges, straight lines and curves, rounded corners and angles. The Tank Américaine was also the first Cartier watch to offer a curved water-resistant case.

With its robust, generous proportions and emphatic beauty, the watch introduced a new folding buckle that allowed the strap length to be precisely adjusted to the wrist size, replacing the mechanism employed by Cartier since 1910. The new Tank Américaine embodies the spirit of the original Tank in its contemporary, understated aesthetic. Showcasing clean lines and a strong presence on the wrist, the eternally elegant model makes an utterly modern statement in presenting steel as a precious material.

Hesitating between square and rectangle, Cartier chose a rectangular form for one of its first watches – the Tank Cintrée, whose curved design hugs the wrist. A functional and aesthetic exercise, this watch was a precursor of the Tank Américaine of the 1980s. Its powerful shape is delimited by a pair of brancards that structure the whole. With this watch, Cartier achieves a true watchmaking prowess. Two versions – in pink gold or platinum – reveal a skeleton movement that follows the curves of the case. Its transparent design only preserves the bare essentials: the hands, the chemin de fer and the overlapping gears in the background, all contained within the distinctive curve of the Tank Cintrée. Conceived like a work of art, this watch juxtaposes the elegance of a bold aesthetic with a singular, uncommon calibre.