In a preview of Baselworld 2017, Jaquet Droz has unveiled a timepiece that is as precious as it is exceptional: a genuine ultra-feminine jewel that gives the time, animated by one tourbillon.

Grande Seconde is the heart of the Jaquet Droz legend. A model harking back to the Enlightenment, this bold design was a permanent departure from watches that simply told time. Pierre Jaquet-Droz was the impetus behind time becoming a series of artistic moments of musings and journeys. The Grande Seconde carries the very essence of the 18th century when the brand known by its twin stars took flight. 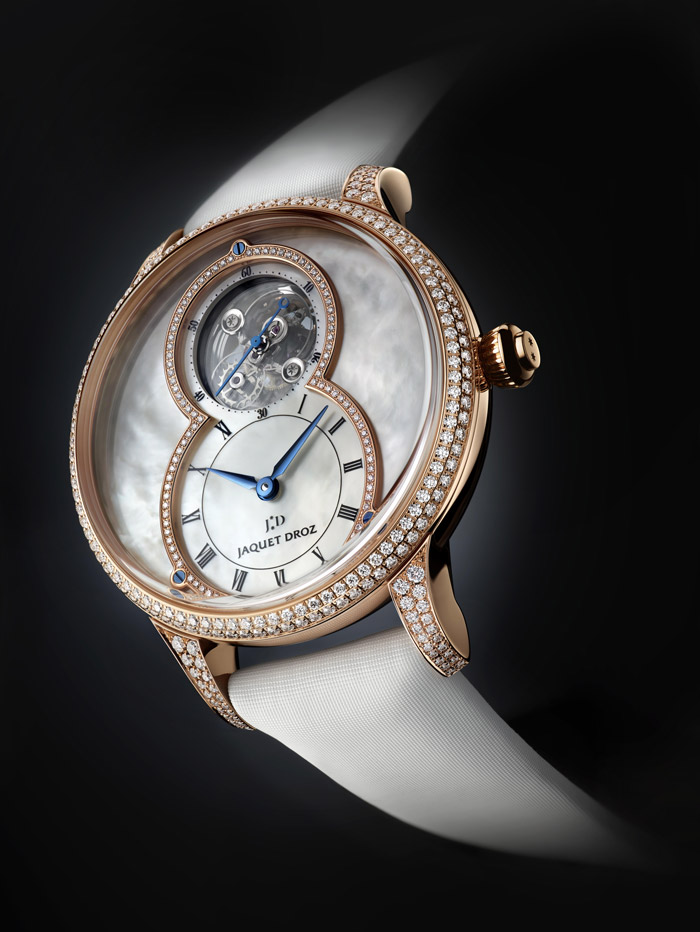 Now Jaquet Droz is putting a new twist on these iconic lines to create a new standard in women’s watches. Master craftsmen did this by choosing one of the most beautifully luminescent materials: mother-of-pearl. Fragile and delicate, it demands amazing dexterity to prevent chipping. With an age-old tradition of mineral dials, Jaquet Droz has all the expertise it needs to once again achieve flawlessness. The shimmering effects play off the gleam of red gold on the 39 mm case set with brilliant-In a preview of Baselworld 2017, Jaquet Droz has unveiled a timepiece that is as precious as it is exceptional: a genuine ultra-feminine jewel that gives the time, animated by tourbillon. diamonds plus the highlight on the dial and the folding clasp. Roman numeral indexes for hours and minutes are a touch of classicism in their own right, accentuating the blued-steel hands. Laid on a white satin strap, there is also a bit of mystery about the Grande Seconde Tourbillon Mother-of-Pearl, like the gold oscillating weight adorned with white mother-of-pearl and the movement’s bridges with a fanned Côtes de Genève design. 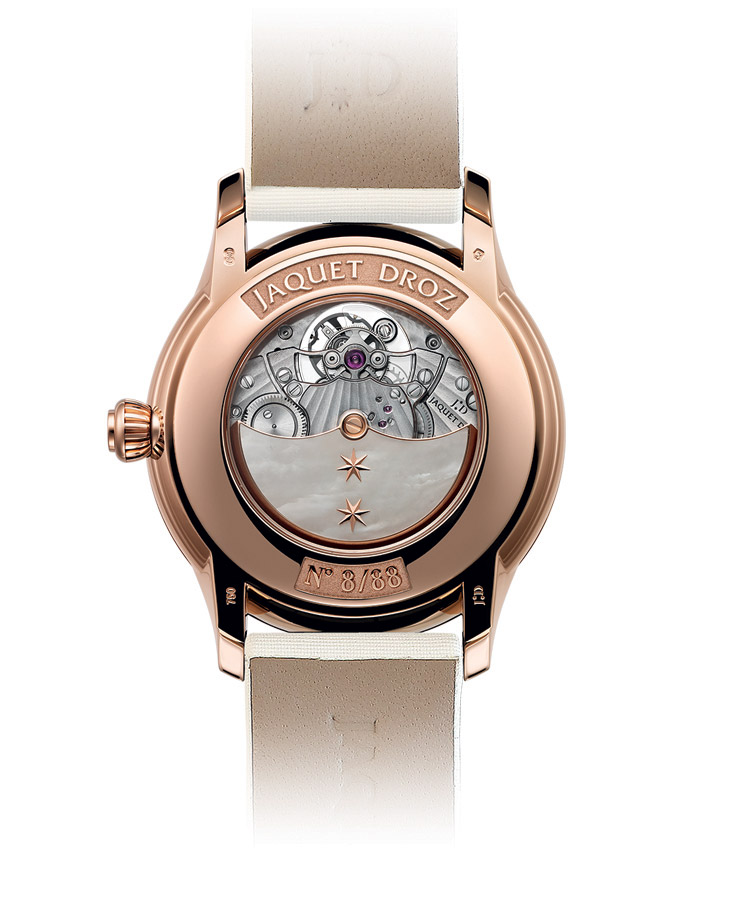 Priceless and discerning, the Grande Seconde Tourbillon Mother-of-Pearl is an irresistibly feminine watch equipped with a tourbillon, one of the masterpieces of watchmaking complications. Countering the effects of gravity on the mechanics, tourbillons are a window into their own untold complexity. Like a tiny hypnotic sculpture deserving of high-precision surgery, this is the first time Jaquet Droz has given it a silicon balance spring and pallet horns. Flexible yet sturdy silicon is almost like a magical material that is rust-proof as well as insensitive to magnetism, non-extreme temperature changes and atmospheric pressure. The balance spring gives the Grande Seconde Tourbillon Mother-of-Pearl unmatched time-telling precision. With a 7-day power reserve, the technological, stylish, invaluable, prodigious Grande Seconde Tourbillon Mother-of-Pearl comes in a limited edition of 88 pieces. The silhouette of the number is reminiscent of the dial’s design imbued with the light of mother-of-pearl and the shimmer of diamonds.