Watchmaking Maison honour the Rat for the Chinese Lunar New Year. While a large part of the world has already celebrated the New Year, Asian communities have to wait until Saturday 25 January to mark the changeover into the twenties. The Metal Rat is about to replace the Earth Pig, before giving way to the Metal Buffalo on February 12, 2021. This is an opportunity for the manufacturers to get on board and seduce itsChinese clientele with watches that often reflect the unique talent of the master craftsmen, who perpetuate ancestral techniques. 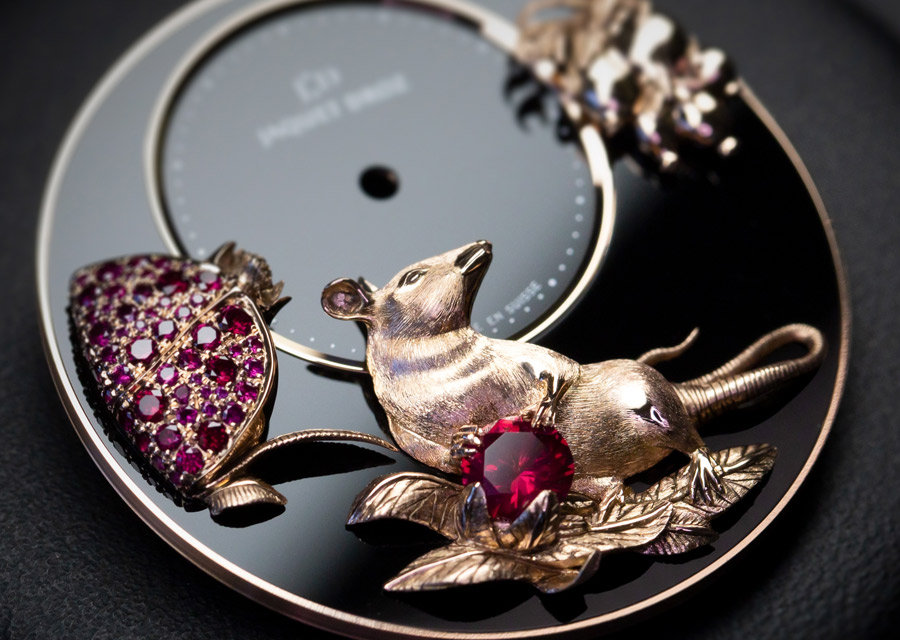 Beyond satisfying and keeping on attracting the favour of a well-off Asian clientele, the watch brands aspire, through a few exceptional pieces—most of them in limited editions—to highlight the essential place of craftsmanship in their creations, and by extension the invaluable and meticulous work of the master craftsmen. Traditional Chinese and Japanese ‘Urushi’ lacquering techniques, a reinterpretation of the popular art of Chinese ‘jianzhi’ paper cutting, the ancestral know-how of porcelain and Italian ‘sparsely’, along with the mastery of Grand Feu enamelling, are just some of the techniques that the manufacturers have used to shape their watches, which were especially produced for the year of the Metal Rat.

As the first sign of the Chinese astrological calendar, the Rat is a symbol of renewal, intelligence, ambition and ingenuity. According to legend, the Jade Emperor—a supreme deity— invited the animals to a strange gathering on New Year’s Eve. Only twelve of them answered the call. The Emperor gifted each of them a year that would bear their name. The Rat arrived first, thus surpassing much more powerful animals, and earning the first place in the Chinese lunar calendar. 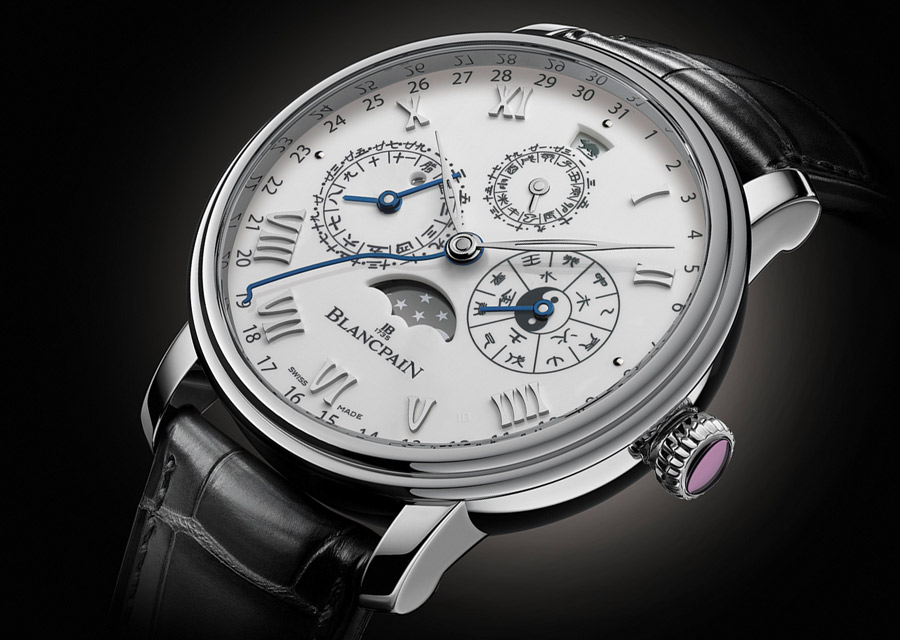 At Blancpain, the new Traditional Chinese Calendar reference in the Villeret collection boasts two different interpretations of time by pairing information from the lunisolar calendar with information from the Gregorian calendar (adopted by the Chinese in 1912). Which is what makes it an incredible watchmaking feat that required five years of development. The Manufacture is revealing it in two men’s versions: one in platinum issued in 50 pieces, and the other in red gold, which is not limited. The setting for this complication is a white Grand Feu enamel dial, displaying a Rat at 12 o’clock, as well as a double hour counter, with both numerals and symbols. At 9 o’clock, two hands indicate the month and date, with a small opening dedicated to the leap months. At 3 o’clock, the ten celestial pillars and the five elements take their place. Completed by a moon phase, this technical performance is meticulously adjusted and assembled by one single watchmaker in Blancpain’s Grandes Complications workshop. At the heart of this remarkable 45 mm-diameter timepiece, an automatic movement decorated with ‘Côtes de Genève’ has a silicon balance spring and an oscillating weight engraved with the same small rodent. 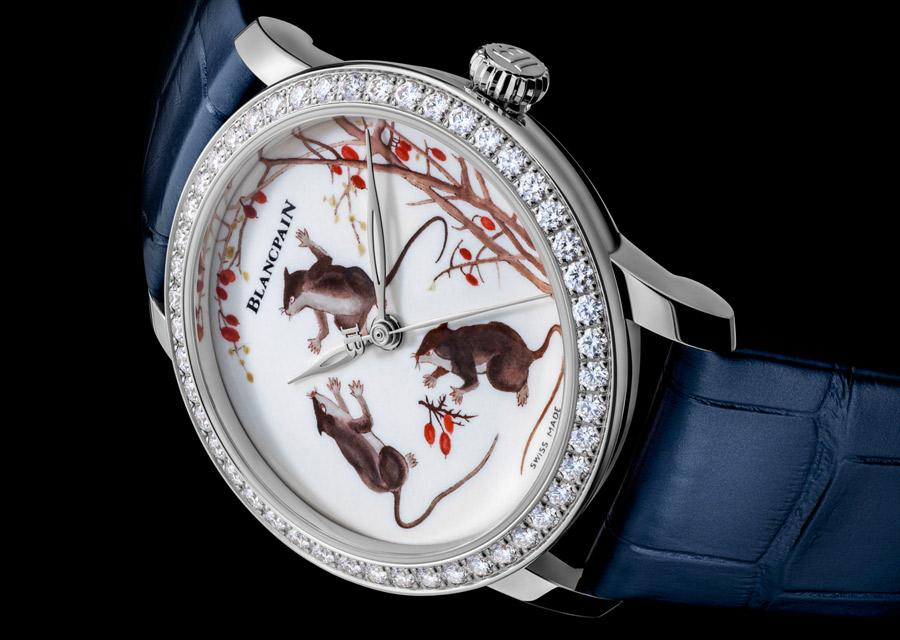 Feminine wrists are not forgotten, as shown in this first porcelain-patch dial watch, made entirely within the Manufacture in Le Brassus. A nod to the lucky number in Chinese numerology, the eight pieces in this special Métiers d’Art Porcelaine series are strongly inspired by this ancestral technique that requires numerous drying and firing stages. They are a perfect example of the successful marriage between the art of porcelain, and the painting of enamel. The decoration of the dial shows three rats delicately hand-painted using an extremely fine brush, which gives it a surprising realism. Equipped with a 33 mm-diameter white-gold case set with forty-eight diamonds, this new automatic edition is associated with an elegant dark blue alligator leather strap. 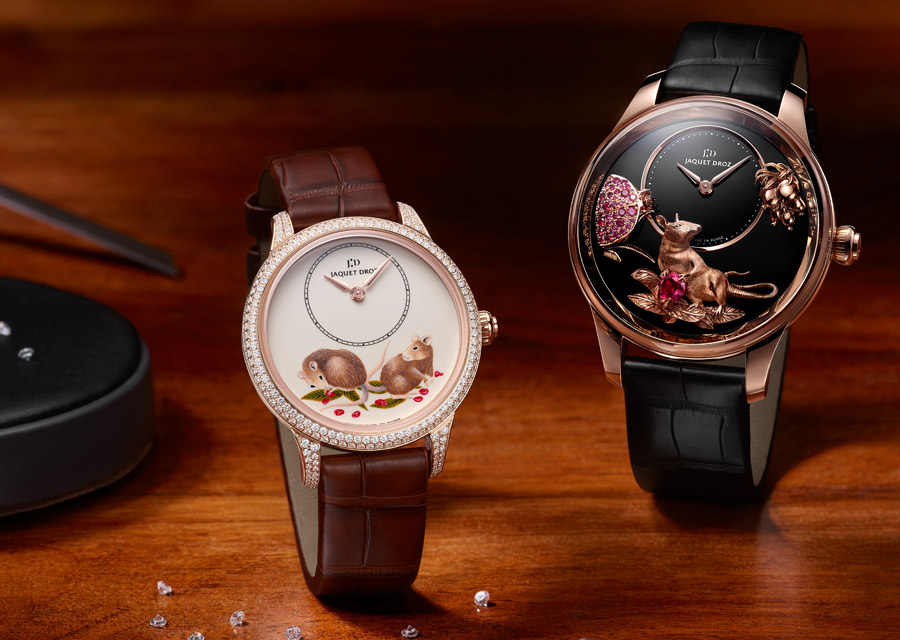 In Jaquet Droz’s workshops of La Chaux-de-Fonds, the Grand Feu enamel is also honoured by the master enamellers on four new pieces bearing the effigy of the Rat. As in China, seeing the rodent augurs good harvests and therefore represents a sign of prosperity, the Maison has delicately chosen to stage the animal in its natural environment and to depict it feeding on pomegranate, a fruit linked to abundance. This fruit is painted meticulously by hand on the Petite Seconde models—in 35 mm and 39 mm diameters—and set with diamonds – 28 pieces each. It is also inlaid with rubies on the 41 mm version with a black onyx dial, available either in red or white gold inlaid with two hundred and seventy-two diamonds. They are even more exclusive, only eight of these timepieces are being produced as a tribute to Jaquet Droz’s favourite number 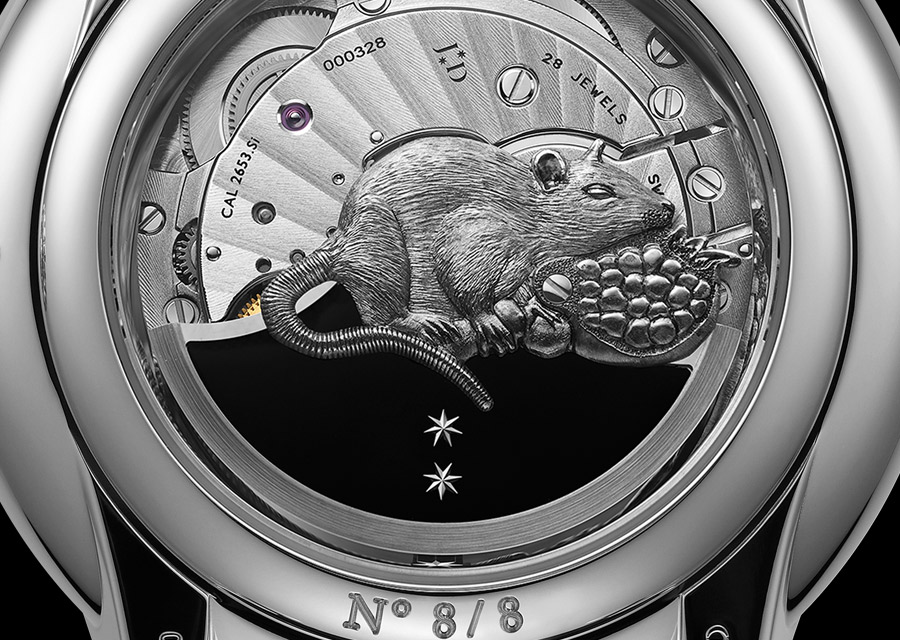 The Piaget Manufacture also illustrates its know-how when it comes to the purity of the dials. This aesthetic and artisanal perfection can be seen on an extra-thin (2.1-mm thick) Altiplano in white gold set with diamonds, specifically created for the Year of the Rat. Shaped in ‘Grand Feu cloisonné’ enamel, the dial presented here depicts a pair of white rats whose ultra-precise silhouettes are rendered using an exclusive process that involves transferring a design onto the worked surface, and then delimiting the contours with a very fine gold thread. Forming small partition walls, the enamel is carefully laid out before going through the kiln several times to obtain the colour desired by the craftsman. With this model, the enameller Anita Porchet has achieved a real feat by creating magnificent shades of grey that bring the animal to life. 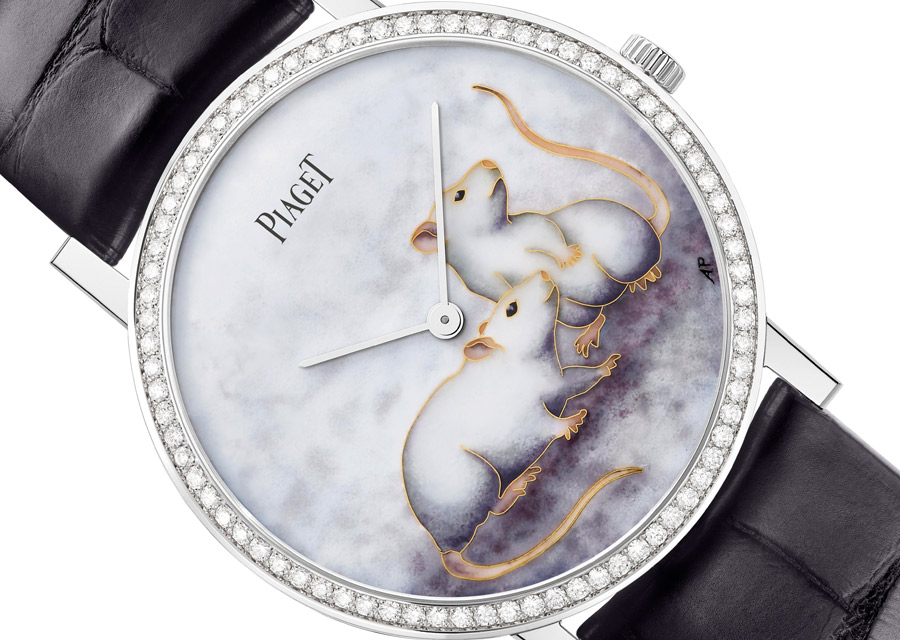 Only eighty-eight copies of Chopard’s L.U.C XP Urushi Year of the Rat will be produced. The watchmaking and jewellery Maison is honouring the ‘Urushi’ lacquerware with this 40 mm diameter pink gold timepiece. This ancestral pictorial lacquering art of Chinese and Japanese origin has been used to create, by hand, a dial depicting a Rat with compositional elements that have a strong symbolic significance: the ear of corn—a sign of abundance—and a persimmon—the fruit of longevity—as well as the lucky colours of this zodiac sign (blue, gold and green). 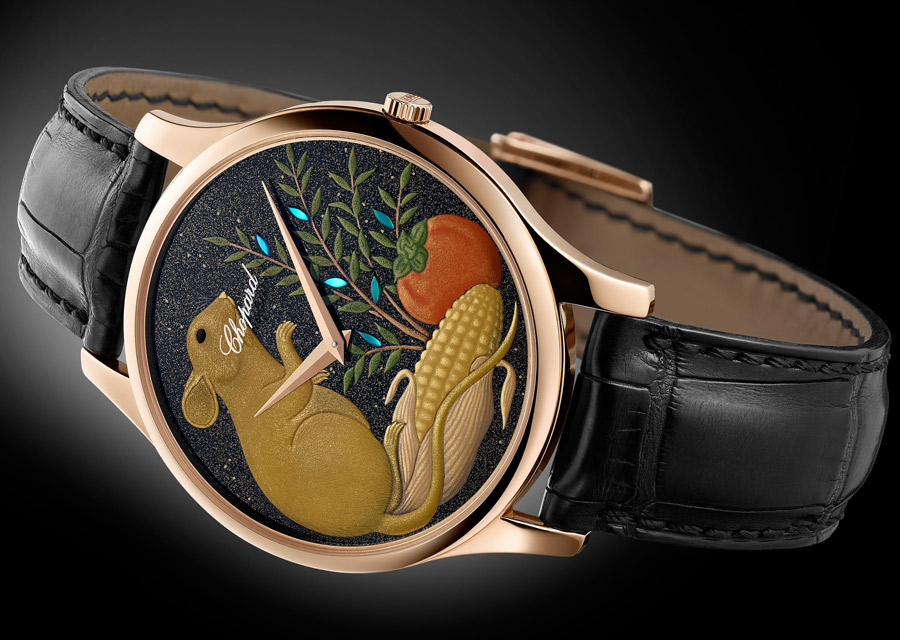 Made in collaboration with the great Urushi master, Yamada Helando, the miniature piece of art is the culmination of a true goldsmith’s work, combining lacquer (from the sap of the Urushi tree called the ‘lacquer tree’ and gold powder, a mixture applied in very thin successive layers. 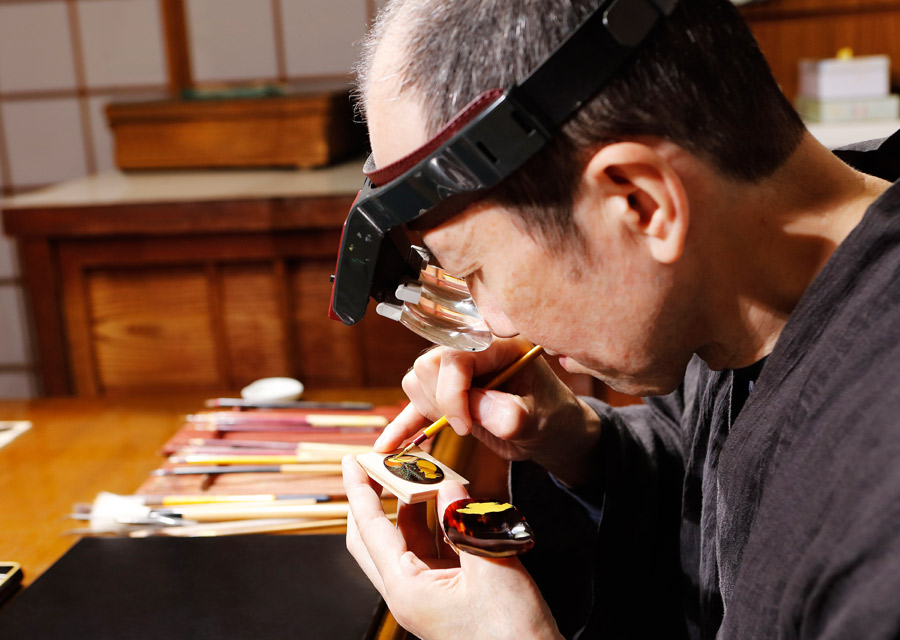 Marrying red and gold, colours believed to bring about good fortune, Harry Winston’s Premier Chinese New Year Automatic 36 mm honours Chinese culture with this flamboyant eight-piece limited edition. The art of ‘jianzhi’ is sublimated to give its dial incredible depth. This paper cut-out technique is one of the most popular and ancient Chinese art forms. And as a matter of fact, it is present in the smallest details of the Chinese’s environment and festive life: walls, lanterns, doors and windows are decorated with it. 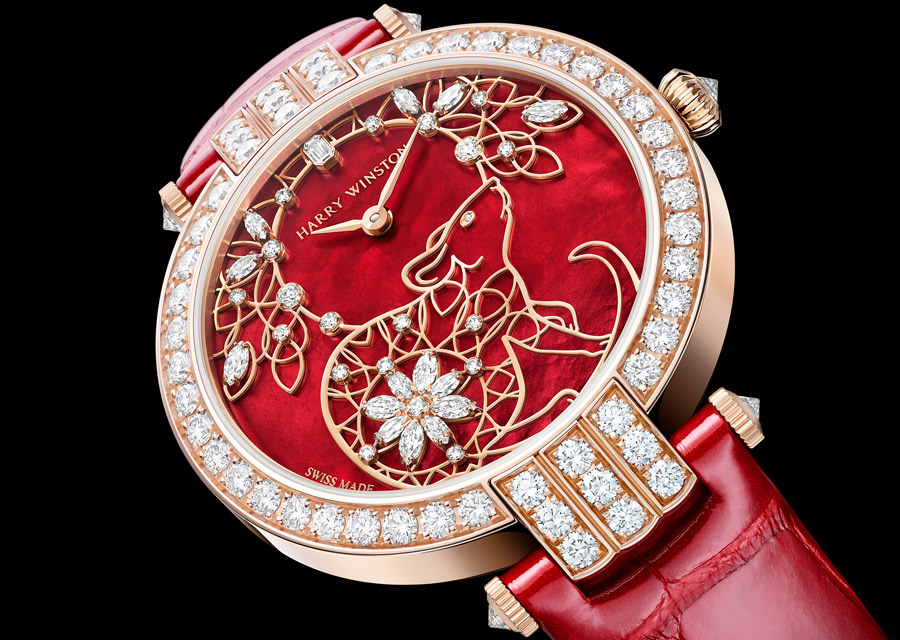 Reinterpreted by the jeweller-watchmaker, the ‘jianzhi’ here translates into the representation of the Rat, which is not made with paper, but made in a delicate continuous structure of pink gold, contrasted with a mother-of-pearl background of intense red. Precious and sparkling, this piece inlaid with fifty-seven diamonds is served on an alligator leather strap of the same carmine hues. 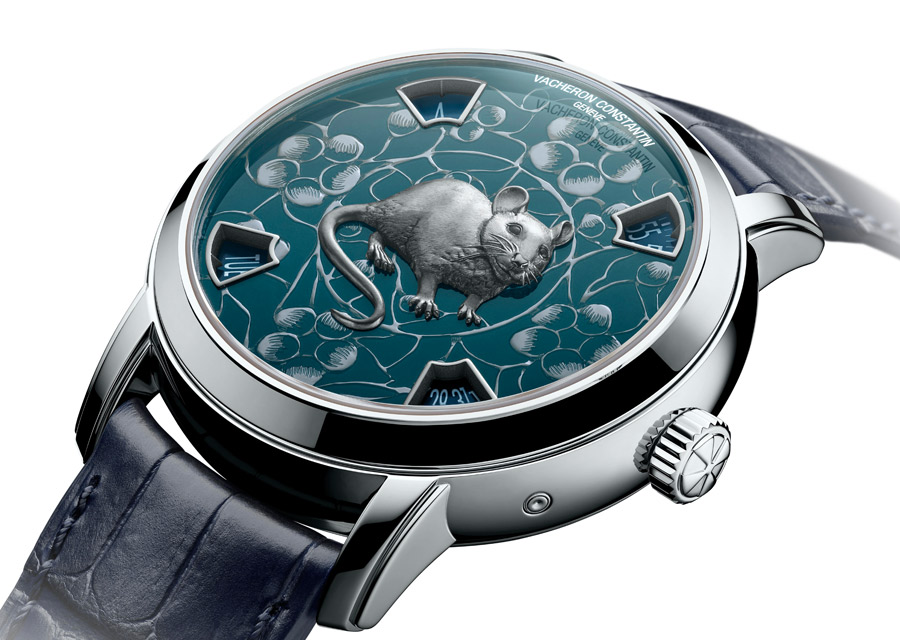 The same Chinese artisanal technique inspired Vacheron Constantin, who pushed the art form to its limits his two Métiers d’Art The Legend of the Chinese Zodiac models, available in platinum and pink gold. Inspired from both Western and Eastern cultures, the paper-cutting salutes ‘jianzhi’ just as it nods to its Swiss alter ego—the famous ‘Scherenschritt’—to create an engraved dial with patterns reminiscent of Chinese iconography. In Grand Feu enamel, it houses either a platinum or gold Rat surrounded by four windows opening on the hours, minutes, day and date, for an atypical and intuitive display of time. With a diameter of 40 mm, these two variations are certified by the prestigious Hallmark of Geneva and have a gold openworked oscillating weight decorated with a Maltese Cross, the emblem of the Manufacture. 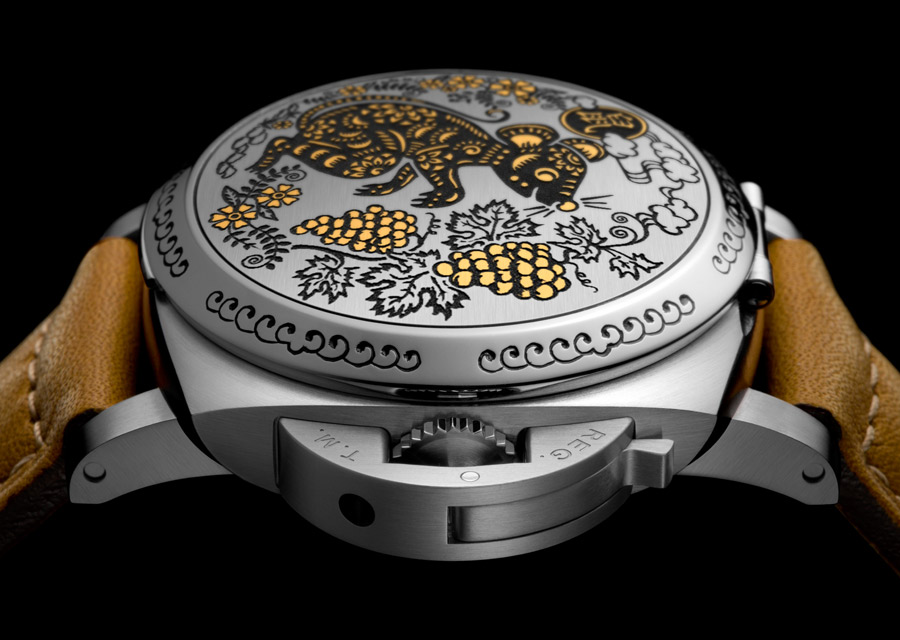 In 2009, Panerai launched its first model dedicated to the Chinese lunar calendar with the Buffalo. Today, the house is closing a twelve-year cycle with the Rat, with an emblematic model. The Florentine manufacturer has chosen a 44 mm Luminor Sealand, with a 316L steel protective cover on the front, and decorated with a ‘sparsello’ pattern. This Italian technique owes its name to the tool used to make the small incisions, strangely reminiscent of a scalpel. These tiny incisions are then inlaid with gold threads struck which are carefully hammered to fill the recesses. A process that requires patience and total mastery to create this little rat sitting proudly on the moving element and seemingly taunting the observer with its malicious look.

While other brands do not approach the subject of the Chinese New Year through their crafts, they do offer some very colourful creations. 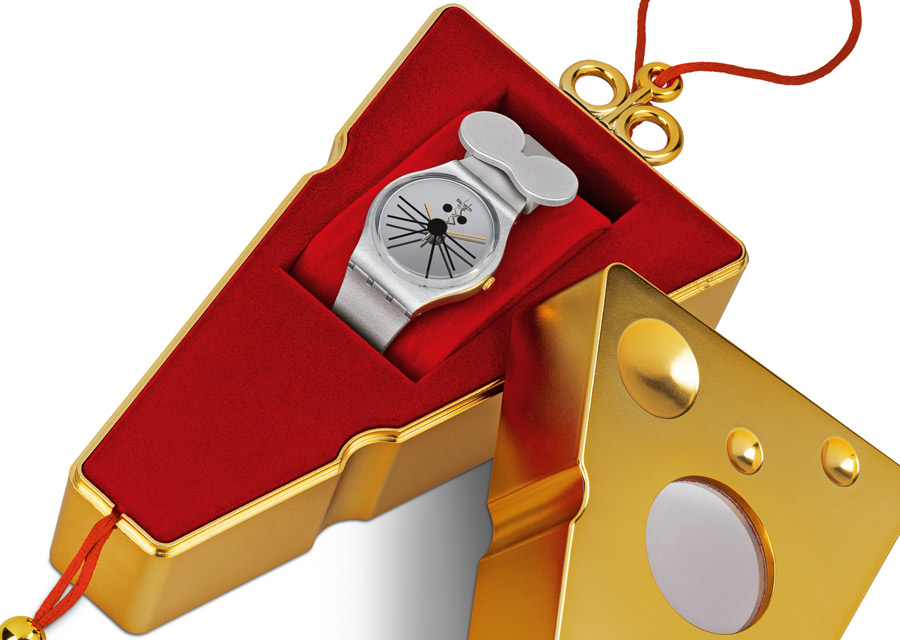 Take for instance Swatch, who published a version called ‘Cheese’, which is not lacking in character. Delivered in a gold and red case inspired by a portion of Gruyère cheese, this model made of shiny silvered plastic, with a metallic grey silicone bracelet, and red on the back, shows its facetious side with its rat ear-shaped loop. 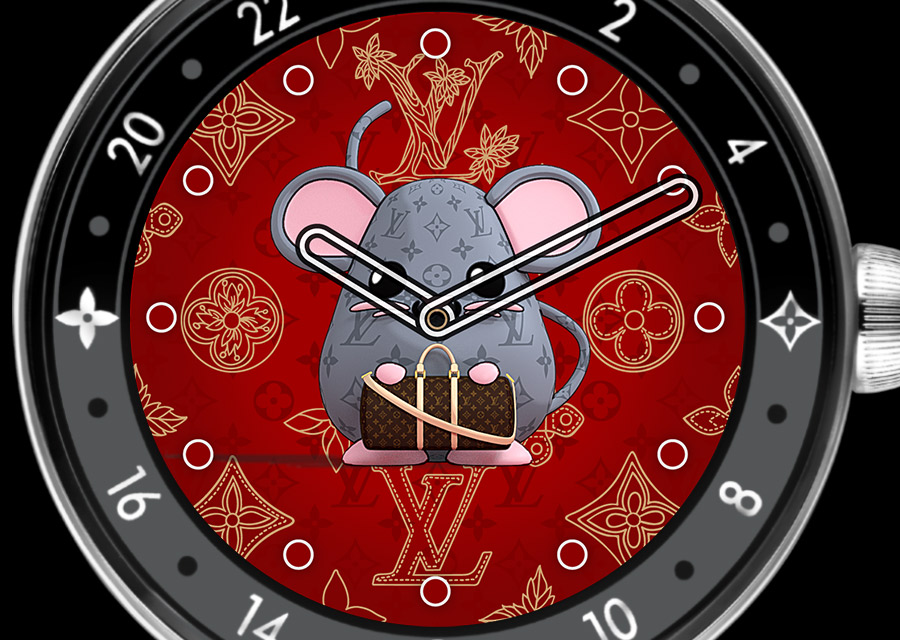 On the other hand, Louis Vuitton is doing very well with its Tambour Horizon. The Maison’s famous and intuitive connected watch takes advantage of the possibilities of its digital colour screen to display the twelve signs of the Chinese zodiac, adorable animals with very ‘comic strip’ faces posing in the centre of the dial, and carrying the iconic bags of the famous leather goods manufacturer.