For the first time, the master watchmakers at Jaeger-LeCoultre have combined a flying tourbillon with universal time. With its 43.5 mm platinum case, the Geophysic Tourbillon Universal Time asserts itself as the most exclusive piece in the eponymous collection. Fascinating in many ways, this timepiece offers exceptional readability and operating.

While remaining true to the ingenuity which allows for the creation of complex yet easy-to-use mechanisms, the Manufacture has followed the rules of the watchmaking tradition that defines it. Featuring the new Jaeger-LeCoultre Calibre 948, the Geophysic Tourbillon Universal Time embodies this inventive spirit in a unique and universal way. Under the dome of its sapphire crystal, it presents a 360-degree view of the world… 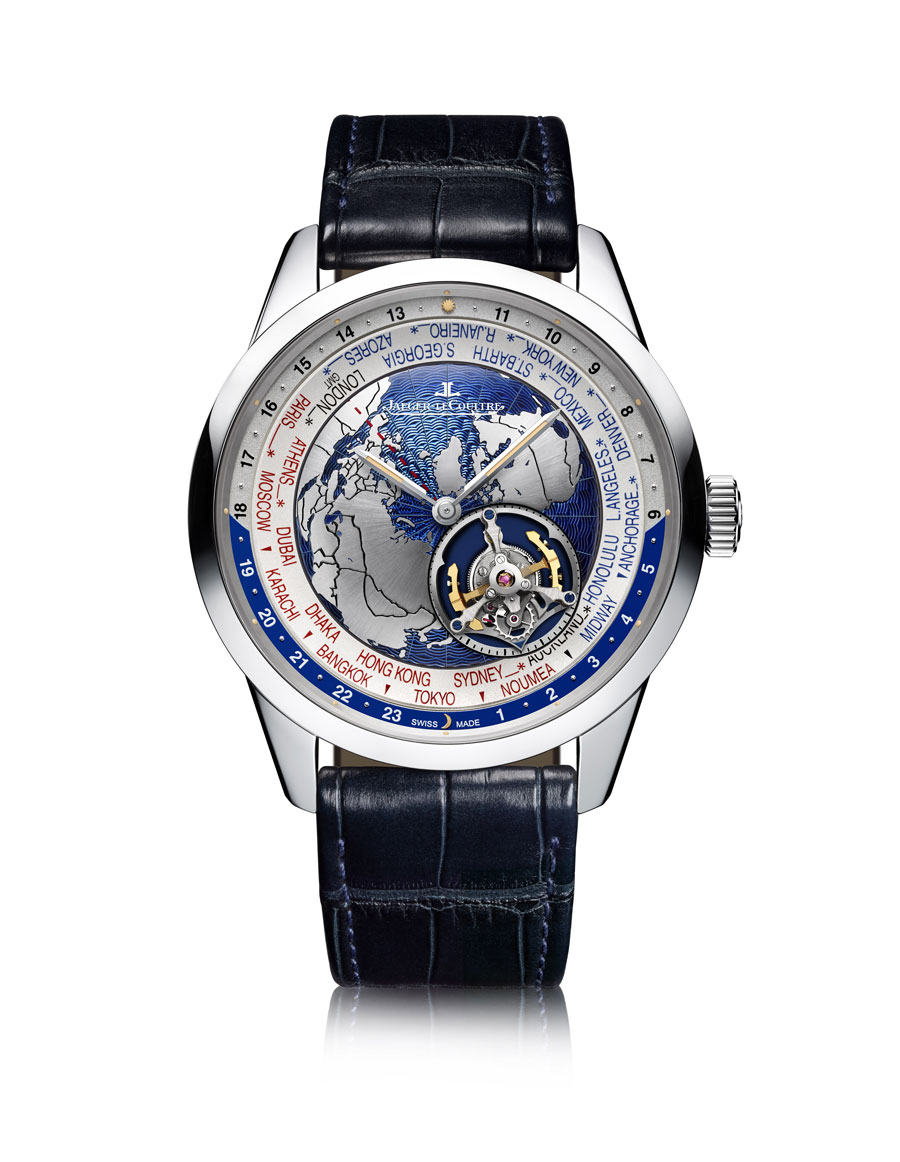 One rotation in 24 hours
In this majestic planisphere, the eye is drawn to the flying tourbillon, which appears to float in space with the absence of a bridge to hold its cage. The lightly convex side view of the dial recalls the shape of a globe. On the intense blue lacquered ocean, small spirals form waves amplifying the impression of relief and depth that the watch creates when viewed from above. With a satin-brushed finish, the continents move across the central disc every 24 hours i.e. following the pace set by the flying tourbillon. In this landscape that changes as the hours go by, the tourbillon rotates around itself and the guilloché dial with remarkable accuracy. The eye is then drawn to the accelerated rolling of the Gyrolab balance wheel which, in addition to its balance spring hand-crafted in the workshops of the Manufacture, features the shape of a watch anchor, the symbol of Jaeger-LeCoultre.

Easy readability combined with surprisingly simple adjustment
With constant readability thanks to the luminescent material, which constitutes the points on the flange of the dial and the hands, the Geophysic Tourbillon Universal Time watch is easily set with a single crown. Turning over the watch, enthusiasts will recognise the detailing and ingenuity of its mechanism glimpsed through the sapphire crystal case-back. Outshining the rubies and blued screws, the solid gold monobloc oscillating weight reveals Jaeger-LeCoultre’s two characteristic initials through the heart of its half-sphere. This gifted watchmaker’s symbol is visible from the front and back.