With the Meister Chronoscope Terrassenbau edition, the Saxon house Junghans celebrates the centenary of the spectacular terraced, hillside building in which it established its workshops in 1918. Located in Schramberg in the Black Forest and today transformed into museum, the building is one of the masterpieces of the architect Philipp Jakob Manz. Its astonishing staircase construction, which is nine storeys high, allowed watchmakers to benefit from an ideal light for their meticulous work. Two limited editions pay homage to this witness of history. In pink gold (100 pieces) or steel (1000 pieces), they display on the back of the case an engraving of the monument and take some elements of its decoration. 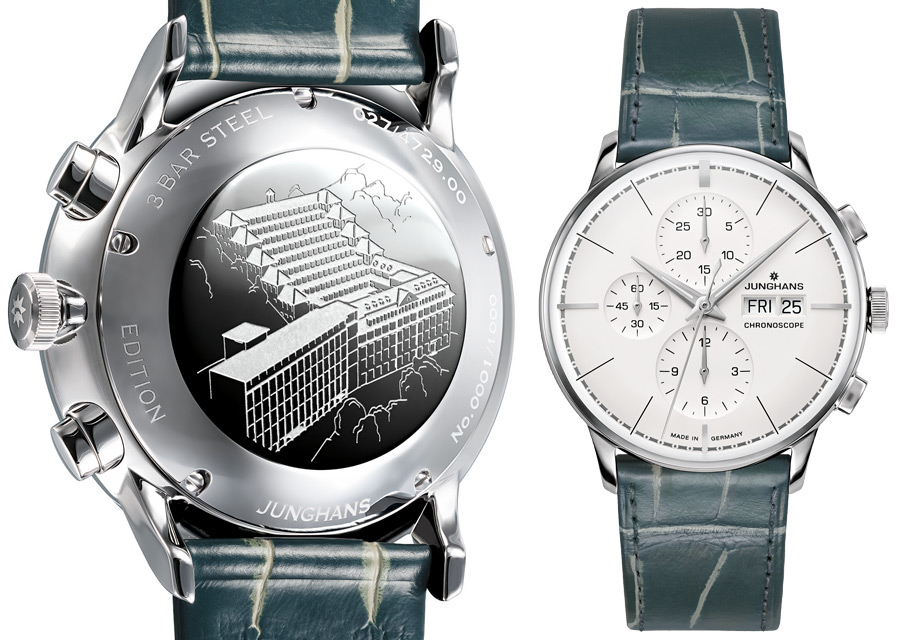 The terrace building in Schramberg is one of the most spectacular industrial buildings worldwide to be built on a sloping site. At the beginning of the 20th century Junghans was the largest clock manufacturer in the world: demand for Junghans timepieces was so great that there was an increasing requirement for workplaces in the already cramped valley in Schramberg. The nine-stepped terrace building was built directly on the slope, in less than two years. 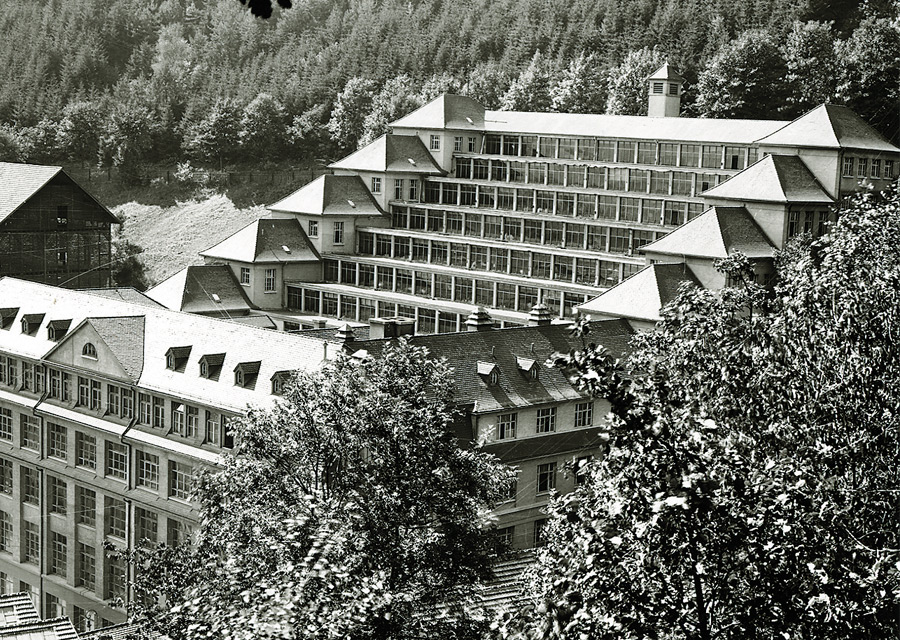 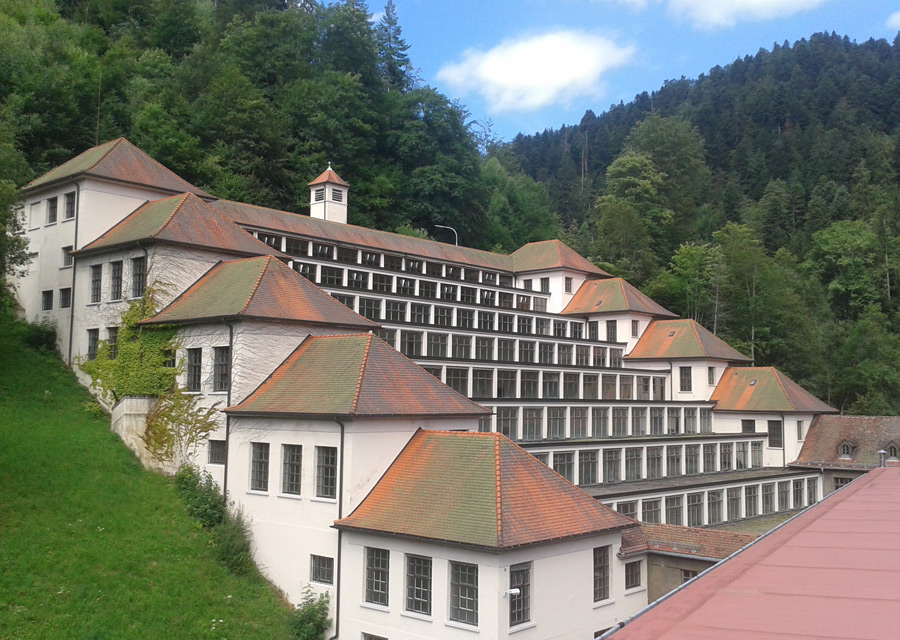 As a result, from 1918 onwards each watchmaker could benefit from direct daylight at the workplace. For decades, the building was the centrepiece of the Junghans factory. In the heyday of mechanical movements in the 50s and 60s in particular, numerous calibres were developed in Schramberg. Components were manufactured in the building to the front of the site, with calibre and watch assembly in the terrace building. The top floor was reserved for work that called for the utmost concentration, time and absolute dedication from the watchmakers: the assembly and regulation of chronometers. 2018 sees the monument of industrial architecture celebrate its 100th birthday, with 100 years of architectural history commemorated with a very special timepiece – the limited edition Meister Chronoscope Terrassenbau. 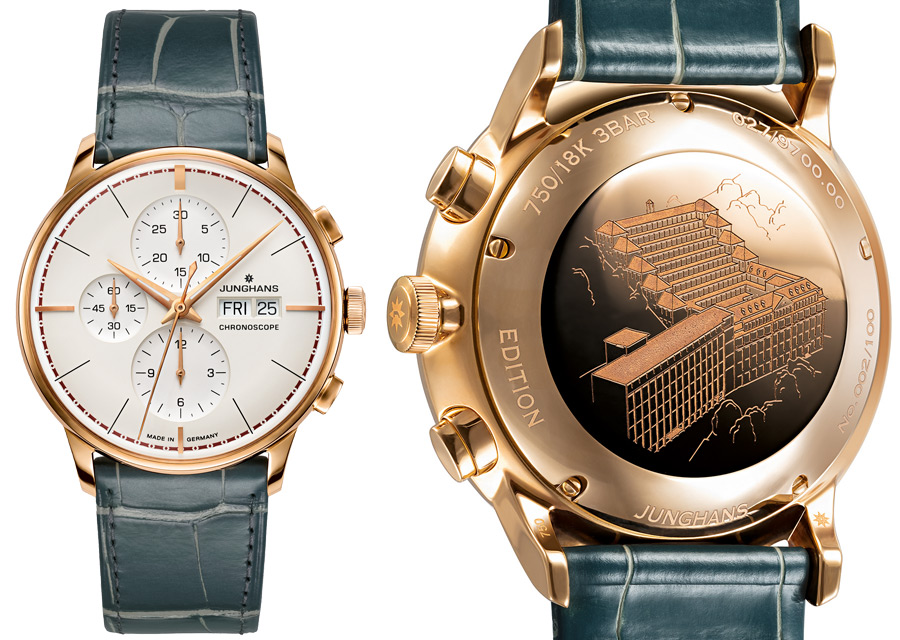 With a limited edition of 100 pieces, the Meister Chronoscope Terrassenbau features a 18-kt. gold case. Inspiration for the champagne-coloured dial with the three matt silver totalisers were the stairways of the terrace building, which are in beige and white.

The stainless steel version is limited to 1,000 watches and has a matt silver-plated dial.

Both models incorporate the distinctive elements of the industrial monument in Schramberg into their design: the minute track of the dial reflects the meandering design of the wall decorations in the terrace building, whilst the dark green of the wall tiles in the stairways can be found in the alligator leather strap. The case back delivers a direct view of the architectural work: an engraved image of the terrace building.

The Meister Chronoscope Terrassenbau – a masterful timepiece as homage to an architectural
masterpiece.

The Junghans Meister range, inspiration from tradition
Meister – a label that stands for an entire Junghans watch range. The balanced design of the dial with its harmonious proportions has been a characteristic of the Meister line since the 1930s, together with the best movements produced at the company. In the 1950s the watch designers addressed the challenge of reducing the volumes of the watch and creating intricate timepieces, despite the relatively high movement. The steeply domed glasses and dials in combination with thin-walled cases lent the watches a new, elegant and graceful look. During this time Junghans was also producing numerous mechanical calibres, such as the chronometer calibre J83, one of the finest movements to be manufactured in Germany. The design of the Meister collection continues to delight with the grace of its historical predecessors to this day. The models are an homage to the design philosophy and technical achievements of that era. Modern technology, exciting proportions and elegant lines are still features of these Junghans classics today.

Junghans, The German watch
Junghans was founded in the Black Forest town of Schramberg in 1861. Over 150 years of expertise in precision and design is reflected in memorable milestones: In 1903 Junghans was the largest watch manufacturer in the world, with over 3,000 employees. The development of precision movements made the company the largest German manufacturer of chronometers in 1951 and the third largest worldwide in 1956. In 1972 Junghans was the official timekeeper of the Olympic Games in Munich, setting new standards in timekeeping. After an eventful and turbulent company history, the Schramberg entrepreneurs Dr. Hans-Jochem and Hannes Steim became the new owners of the venerable company in 2009. Each watch is produced in Schramberg with great attention to detail, technological expertise and high standards of design and quality. The collection comprises charismatic timepieces: The Meister watches, which have been produced since the 1930s, reflect the history and present of the company. In 1956 Max Bill designed watches that have become absolute classics. Distinguished by the Bauhaus philosophy, they are still produced today in nearly unchanged form. Junghans set new standards in 1990 with the invention of the radio-controlled wristwatch – a technology that is still used today, in combination with environmentally-friendly solar power. A wide variety of technology as unique as the watches bearing the star.