Louis Vuitton has chosen to highlight the blue color within the Escale collection with a series of three new automatic watches. All combine beautiful mechanical complexities with their boxes inspired by the iconic design of corners of Vuitton’s trunks, on a mesmerizing chromatic theme.

Developed in the Fabrique du Temps Louis Vuitton, located in Meyrin in the canton of Geneva, the new Escale Bleue series will be available in stores starting in April. It includes three models: Spin Time, Spin Time Tourbillon Central and Worldtime – which capture the eye by staging their mechanical characteristics, combined with superb shades of blue. As a perfect match between the know-how of the watchmakers and that of the master craftsmen of the manufacture. All these instruments are combined with a dark blue alligator strap, featuring a yellow rubber-effect calfskin lining.

Three shades of cyan can be found at the centre of the movement, which was developed in-house, as well as on its singular dial, for a free and contemporary reinterpretation of time display. Hypnotic, the Escale Spin Time incorporates the ingenious hour display principle of the Spin Time movement in an Escale case. A reflection of the unique expertise of the watchmakers and dial-makers at La Fabrique du Temps Louis Vuitton, the dial boasts an exceptional finish and features an array of soft and metallic shades of blue. Positioned in the centre of the sapphire crystal, a disk with clean lines bearing the inscription “Louis Vuitton Spin Time“ evokes the shape of a stylised globe, continuing Louis Vuitton’s long-held theme of world travel. 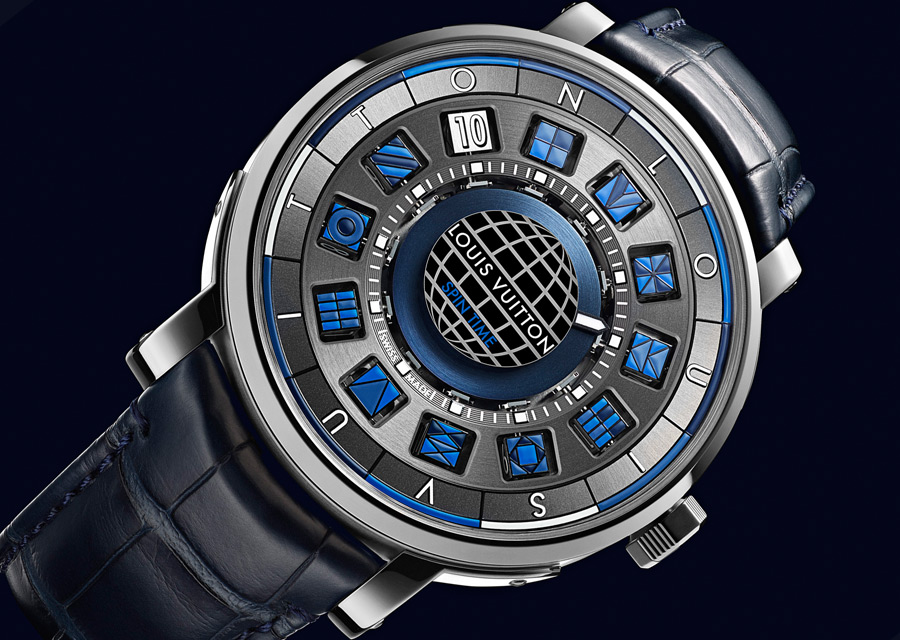 In 2010, Louis Vuitton introduced the Tambour Spin Time GMT, which offered an innovative and playful new way to tell time based on an ingenious system of 12 rotating cubes powered by a proprietary movement (LV 119) that revolutionised the concept of jumping hours. In 2014, the House took it one step further by launching another entirely original watch with a unique shape and a new case inspired by the iconic Louis Vuitton trunks, baptised Escale. With its intriguing features, this timepiece offers an original take on the Worldtime function and a colourful dial inspired by the hand-painted initials, coats of arms and colour strips that customised the trunks. This theme, which served as an inspiration for the Escale Worldtime and Escale Time Zone’s dials, was also incorporated into the Escale Spin Time’s design.

Here, the hour is displayed when two of the twelve axes rotate simultaneously, moving the cube at each extremity to reveal four sides: a.m. on one side, p.m. on another and different-coloured flags inspired by the House’s customised trunks on the other two. Minutes are displayed with a traditional watch hand.

Like a miniature travel trunk holding a mechanical treasure inside, the Escale Spin Time Blue’s case captures the iconic design of the corners of Louis Vuitton trunks and transforms them into lugs, giving it elegant protection against the ravages of time. At 41 mm in diameter and 11.2 mm thick, the Escale Spin Time Blue’s case is made of brushed titanium with a bezel, lugs and crown in 18 carat white gold. Its delicate bezel frames the dial beautifully, giving the hour display and the ballet of rotating cubes optimal visibility. The sapphire back reveals an aluminium disc paired with an oscillating weight that turns with precision around a large, boldly outlined “LV“.

The Louis Vuitton Escale Spin Time Blue boasts a navy blue alligator strap with a yellow rubber-effect calfskin lining and an ardillon buckle in 18 carat white gold, making this time piece one of a kind.

The Escale Spin Time Tourbillon Central Blue takes you on a journey through time. This timepiece features the iconic Escale Spin Time case with its time display made possible by an ingenious system of 12 rotating cubes powered by a movement developed and assembled in-house, and takes it one step further in this noble and contemporary design. Playing on subtle variations of blue, this new Louis Vuitton creation integrates a flying tourbillon positioned in the centre of the dial that completes its rotation in one minute. In a technical and aesthetic tour de force, the combination of the central flying tourbillon and the Spin Time display mechanism is a first in watchmaking history. With its unique concept and design, the tourbillon carriage appears to literally float over the centre of the watch. A sapphire crystal was pecifically designed to highlight this effect while keeping the case relatively thin. 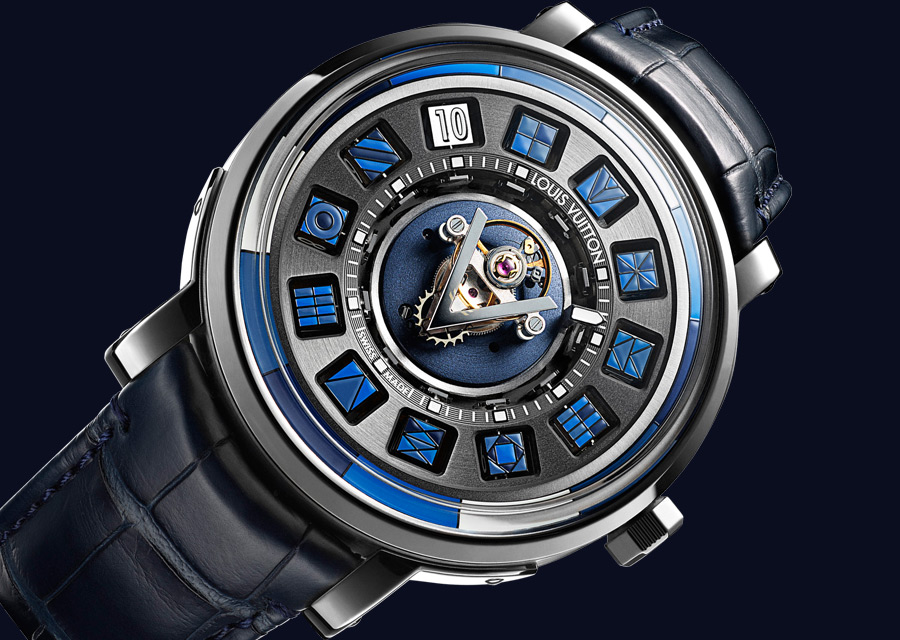 A shining example of the House’s watchmaking expertise, this luxury timepiece also features a V-shaped tourbillon carriage. The watchmakers at La Fabrique du Temps Louis Vuitton drew inspiration from the House’s archives by emblazoning it with the V signature that Gaston Vuitton invented in 1901 to decorate the famous Steamer Bag.

As each hour passes, one of the twelve blue cubes rotates on its axis as if by magic. The Escale Spin Time Tourbillon Central Blue’s dial changes its appearance thanks to 24 square geometric flags, painted by hand using pad printing on each of the 12 cubes. The process of transferring ink from an etched plate using a silicone rubber stamp is extremely complex to produce on such small surfaces and is carried out by hand, one colour at a time, to ensure precise marking. The central flying tourbillon floats majestically over the dial, adding an element of mystery to this exceptional watch’s unique design.

Like a miniature travel trunk holding a mechanical treasure inside, the Escale Spin Time Tourbillon Central Blue’s case captures the iconic design of the corners of Louis Vuitton trunks and transforms them into lugs, giving it elegant protection against the ravages of time. At 41 mm in diameter and 12.8 mm thick, the Escale Spin Time’s case is made of satin-finished titanium with a bezel, lugs and crown in 950 platinum. Its delicate platinum bezel frames the dial beautifully, giving the hour display, the ballet of rotating cubes and the tourbillon optimal visibility. The sapphire back reveals an aluminium disc paired with an oscillating weight that turns with precision around a large, boldly outlined “LV“.

The Escale Spin Time Tourbillon Central Blue boasts a navy blue alligator strap with a yellow rubber-effect calfskin lining and a platinum ardillon buckle, making this time piece one of a kind for both its aestheticism and its technical prowess.

The Escale Worldtime Blue : the art of travelling dear to Louis Vuitton

The Escale Worldtime watch continues to be a trailblazer in the watchmaking world with a new dial featuring vibrant navy blue glints. Unveiled in 2014, the Escale Worldtime perpetuates the great tradition of travel dear to Louis Vuitton: its famous trunks and many variations were – and remain – the essential accessory for those who like to tour the world in elegant, reﬁned style. The one-of-a-kind Escale Worldtime Blue draws inspiration from the history of the House and its legendary trunks to reinvent the hallmarks of watches designed for seasoned travellers. Louis Vuitton oﬀers a brand new interpretation of the “Worldtime” function that is bound to be seen on the wrists of globetrotters and businessmen with a penchant for ﬁne timepieces. 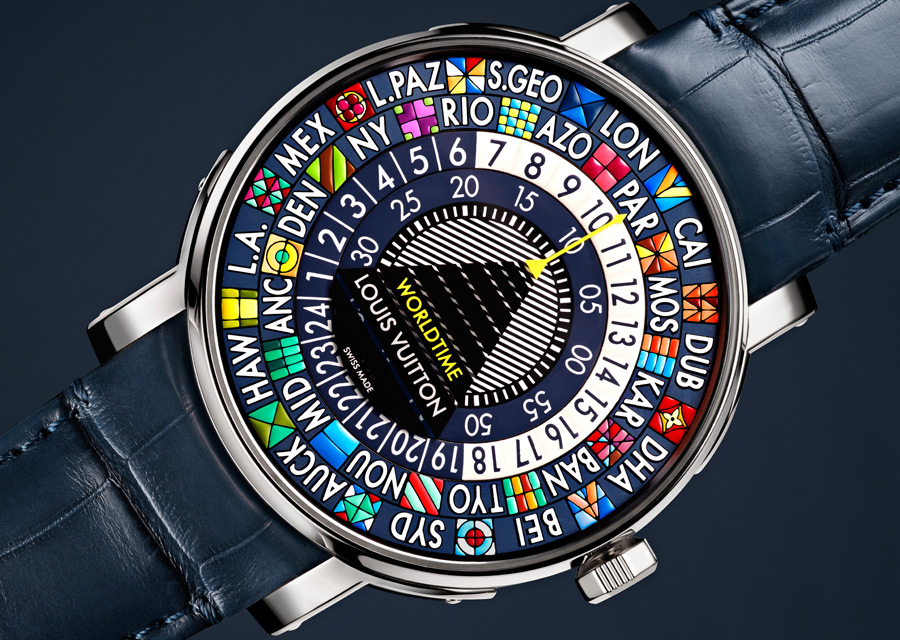 Louis Vuitton has always oﬀered its customers the opportunity to customise their trunks using strips of colour, initials, coats-of-arms and other hand-painted geometric pictograms. This colourful universe and vibrant customisations provide an original source of inspiration for the design of the Escale Worldtime dial. This year, the dial is adorned with a new colour: a vibrant blue that lends a very contemporary feel to the design.

Using the technique of miniature painting, it took the master craftsman 40 hours to complete a single dial in a dedicated workshop at the La Fabrique du Temps Louis Vuitton manufacture. A total of 38 colours were applied by brush, one by one, in a succession of tiny strokes, before the dial was dried in an oven at 100°C. The result is captivating, with a sparkling, textured and contrasting ﬁnish, further enhanced by the visual eﬀect that separates the glass from the dial. This is why the black triangle topped by a yellow arrow – the only ﬁxed element on the dial, indicating the time and the reference city – is positioned directly underneath the glass, so as not to hinder the motions of the mobile discs.

Made from brushed titanium and polished white gold (horns, bezel, crown) with a diameter of 41 mm, the unique case gives the impression of having always existed. Like a miniature round trunk containing a precious calibre, this unique case transforms the corners of Louis Vuitton trunks into precious horns that protect the watch. To ensure the Worldtime function is easy to read, the slender white gold bezel oﬀers an excellent view of the mainly blue dial. On the reverse side, the sapphire case-back reveals an aluminium disc coupled with an oscillating weight that rotates around a large “LV” in frosted glass.

With the Escale Worldtime Blue, a simple glance at the initials of a city indicates the hour in that time zone, while the minutes are naturally easy to read beneath the yellow arrow pointing to the time in the reference city.

Three separate mobile discs make up the dial. Adjustable via a single crown, they are synchronised by an automatic calibre which is developed and assembled by La Fabrique du Temps Louis Vuitton:
• The large coloured external disc has two layers and bears the city initials. It rotates on demand to adjust the reference city, positioned at midday above the yellow arrow.
• The middle disc, which rotates constantly, is made up of two semicircles, one white and one navy blue, to diﬀerentiate between daytime and night-time hours.
• In the centre, the smallest disc also rotates constantly and bears the minute numerals, highlighted by an accurate, contrasting minute-circle.

The “Worldtime” display, without a hand, is a brand new interpretation developed by the master watchmakers of La Fabrique du Temps Louis Vuitton. In some ways it is the quintessential complication, displaying the time, instantly, in the 24 time zones deﬁned by Sir Stanford Fleming and made oﬃcial at the International Meridian Conference held in Washington in October 1884, which set Greenwich time as the “zero” meridian.

Available in a blue alligator strap lined with yellow rubber-eﬀect calfskin, and fastened with a folding clasp in 18-carat white gold, the Escale Worldtime Blue by Louis Vuitton is a unique timepiece. As well as featuring a new mechanicalinterpretation of the “Worldtime” complication, the new watch will be appreciated by anyone who likes to combine stylish living with the art of travel.