It has become a tradition of the French Open at Roland Garros. Each year, the run-up to the French Open tennis tournament sees Richard Mille unveil a new custom-made timepiece for his ambassador « Rafa » : the RM 35-02 Rafael Nadal. 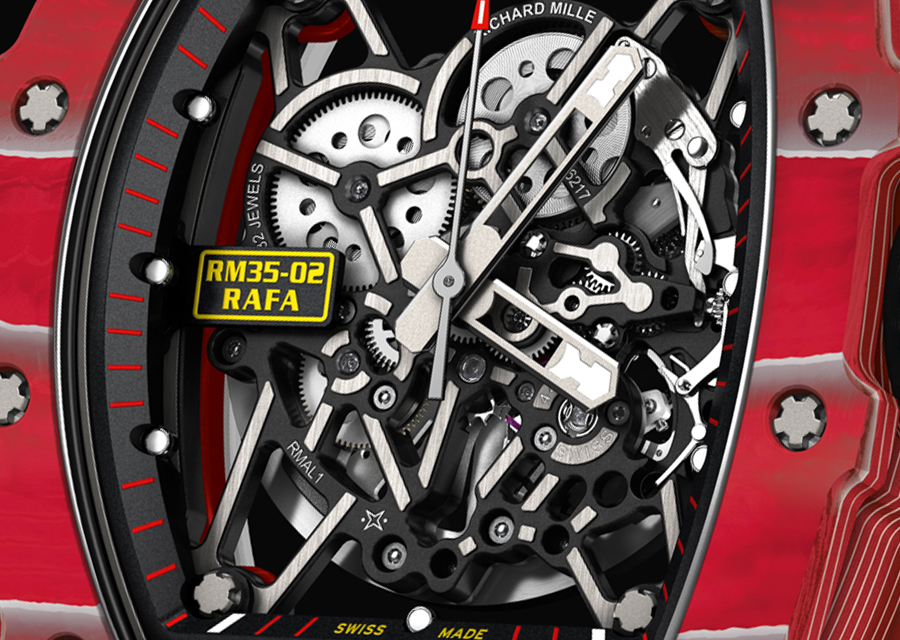 From their first meeting in 2008, Richard Mille and Rafael Nadal embarked on one of the most extraordinary shared adventures in contemporary fine watchmaking. As a result, the name ‘Nadal’ now graces a unique collection of Richard Mille watches that are synonymous with innovation, lightness and shock-resistance. Each of the models they have designed together from the first RM 027 with its carbon nanotubes case in 2010, to the cable-suspended movement of the RM 27-01, or the most recent iteration, the RM 27-02 with its NTPT Carbon ‘unibody’ baseplate has embodied a major leap forward in terms of research and development, bearing witness to what could well be described as an entirely new, structural approach to watchmaking. Like its predecessors, the RM 35-02 Rafael Nadal coalesces the fruits of a constant quest for innovation within a unique design. Powered by the new RMAL1 calibre, the base plate and bridges in wet-sandblasted grade 5 titanium, which has been PVD/Titalyt® treated and stretched to ensure supreme rigidity and impeccably smooth surfaces. Its variable inertia balance wheel oscillates at 28,800 vph, and is driven by a double-barrel system for greater torque stability. Inspired by the RM 35-01, the RM 35-02 emerged in response to a request from many Richard Mille customers for a self-winding mechanism at the heart of a Nadal calibre. The decision to use the brand’s patented variable geometry rotor a real emblem of Richard Mille’s automatic movements was an obvious one that makes it possible to adjust the winding to suit the wearer’s activities. In another first for the Nadal collection, the caseback is protected by a sapphire crystal sporting an anti-reflective treatment so that the calibre may be admired from every angle. 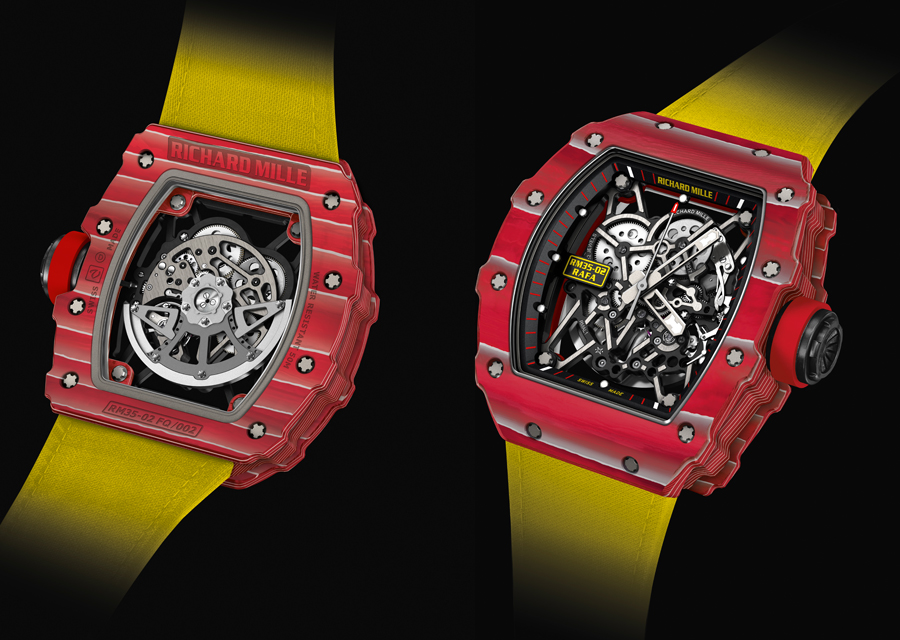 The automatic RM 35-02 Rafael Nadal is available in either NTPT Carbon or a daring bright Quartz-TPT® Red with white highlights. Its silicon layers each no thicker than 45 microns are treated with a red resin that has been specially created for Richard Mille, then layered using an automatic system that changes the direction of the fibres in each layer by 45°. Heated under pressure at 120°C in an autoclave similar to those used for aeronautical components, the material is ready to be worked by ProArt, the manufacturer dedicated to the machining of Richard Mille components and cases. The natural white quartz fibre, which is left undyed as per watchmaking custom, offers a very high resistance/weight ratio, non-allergenic properties and excellent UV resistance. But the true triumph of the engineers at Richard Mille and North Thin Ply Technology resides in the development of a red resin that draws a stark contrast with the natural white of the quartz and its transparent resin. Designed for maximum biocompatibility, stability and resistance and compliant with REACH (Registration, Evaluation and Authorisation of Chemicals) standards, the Quartz-TPT® Red adorning the RM 35-02 can withstand accelerations of up to 5,000 g’s.