The Manufacture Audemars Piguet has unveiled one of its 2016 novelties for the upcoming Salon International de la Haute Horlogerie: a superb QP Royal Oak with blue dial that brings the enduring lustre of yellow gold back to the forefront. 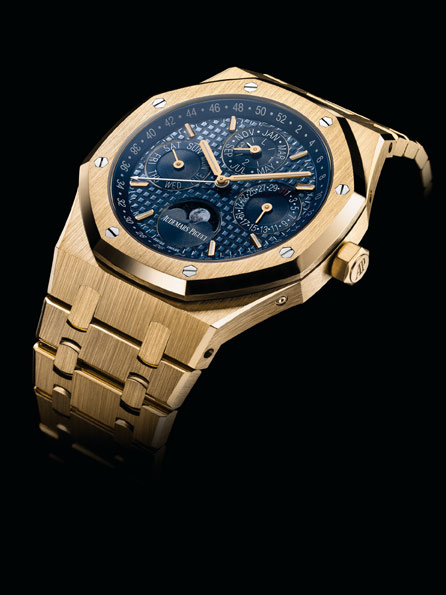 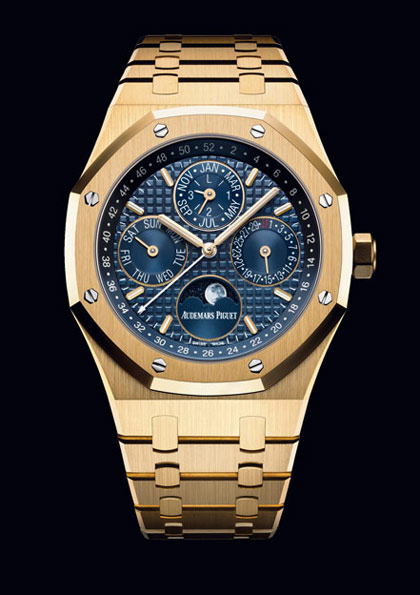 Launched in 1972, the Royal Oak was the first luxury watch to treat stainless steel, and meticulously craft, polish and decorate it, like a precious metal. Using steel in such a manner was a risk, yet ultimately a game-changing triumph. The revolution it launched opened a new and extremely creative chapter for Audemars Piguet, during which it explored traditional and unconventional materials in great depth: platinum, carbon, alacrite, bronze, rubber, ceramic, titanium, tantalum, etc…

Now Audemars Piguet breaks the rules again by returning luxury watchmaking to its most elemental material: yellow gold, the universal emblem of indestructible beauty, energy and light. Since man first learned how to extract it from the earth, yellow gold has not just symbolised wealth and power. It has been its source. For centuries, too, much of the alchemical magic of watchmaking has been held in its warm, eternal embrace. 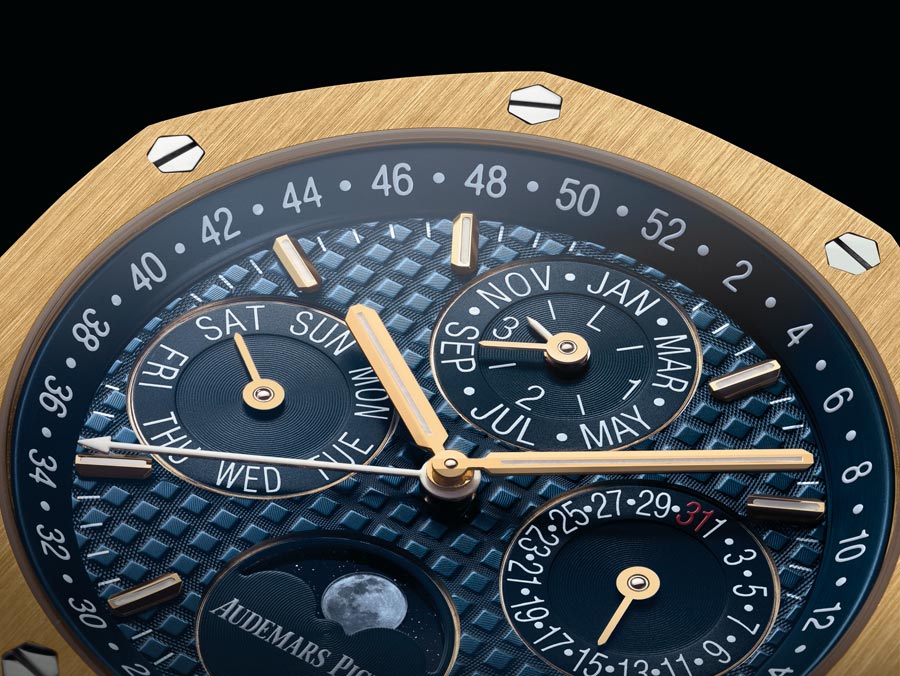 The new Royal Oak Perpetual Calendar celebrates the timeless allure of yellow gold by combining it with the most classic and romantic complication.

On the “Grande Tapisserie” decorated dials – a subtle pattern of three-dimensional squares – the traditional displays of a perpetual calendar timepiece are given pride of place: day, month and date are displayed at nine, noon and three o’clock. The essential leap year indication, an Audemars Piguet innovation first introduced to wristwatch design in 1955, takes centre stage at noon. An astronomical moon finds it place at six o’clock, and the week of the year is displayed on the dial’s outer chapter ring, adding yet another layer of time measurement. 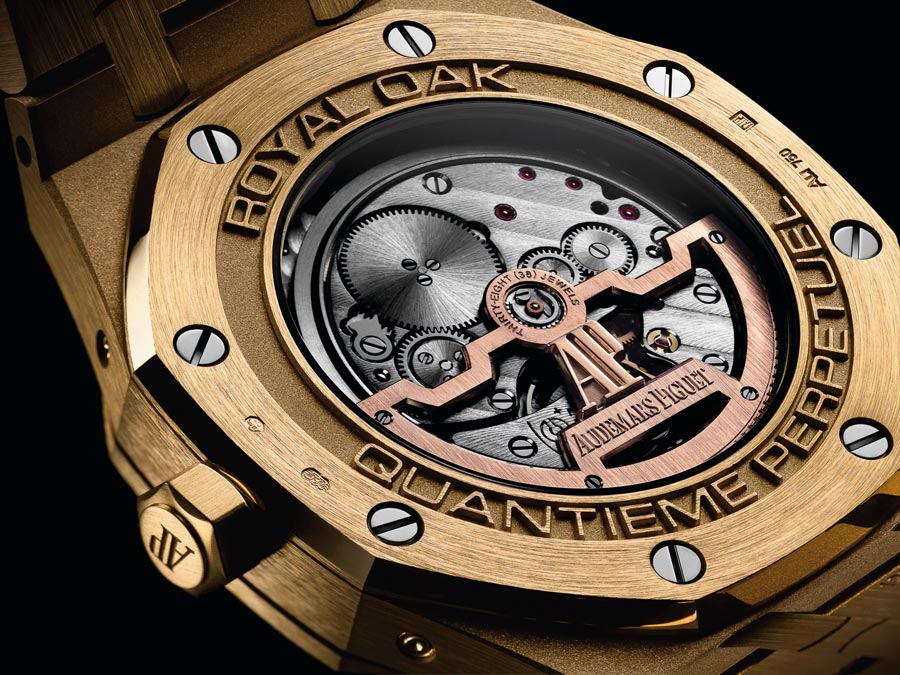 Housed in the perpetual beauty of yellow gold, the self-winding watch’s new calibre 5134 is fully visible through the glareproof sapphire crystal caseback, but the warm, natural glow of precious gold has been brought fully to the fore. Calibre 5134 is based on its predecessor, calibre 2120, however it has been enlarged to perfectly fit the updated 41mm case size. 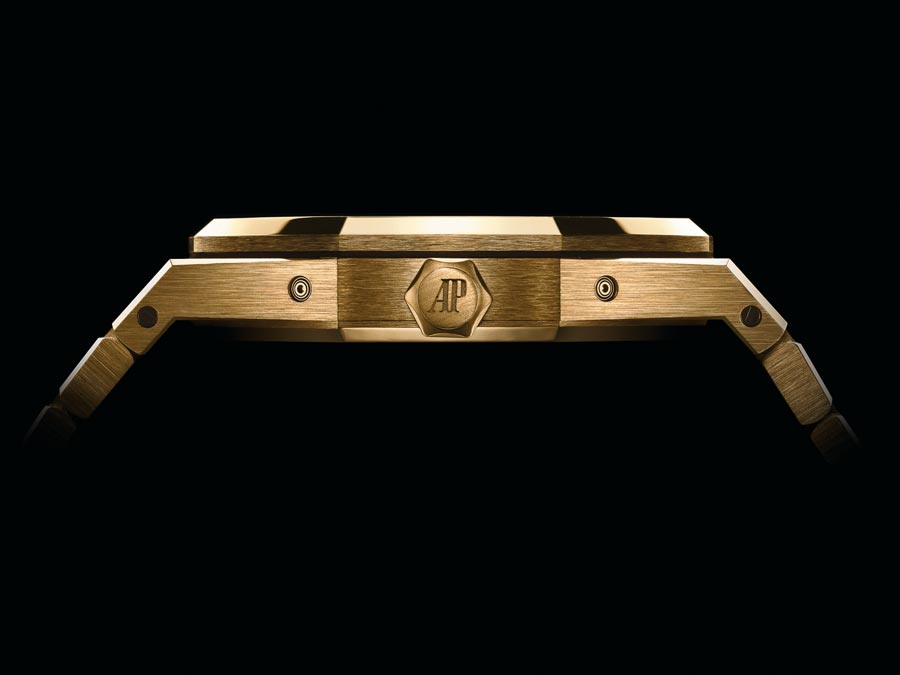 Part of the inspiration for this new edition is the first Royal Oak Perpetual Calendar (reference 5554, later renamed 25554), designed by Jacqueline Dimier in 1984. Of the 279 pieces in that original launch, 229 were sumptuously cased in yellow gold.

Audacious and visionary, the 2016 Royal Oak Perpetual Calendar leads luxury watchmaking back to the rarest, more cherished prize: yellow gold, as brilliant and warm as the sun.