The 2018 edition of the Salon International de la Haute Horlogerie breathes new life into iconic Cartier complications. Cartier strikes the perfect balance between clean design and flamboyant style, the fine line between refinement and excess inherent to every timepiece of character. The potency of this aesthetic signature is crystallised by the mysterious movement and skeleton movement in the intersection of craftsmanship displayed in two new timepieces par excellence.

Refinement and excess are the creative themes for Cartier Fine Watchmaking at the 2018 edition. The solid structure of the Skeleton movement, tangible and powerful, contrasts with the enigma of the mysterious movement, ethereal and discreet. Transparency and depth intensify the impact of these signature movements at the intersection of craftsmanship techniques. In these two watches, the double tourbillon and day/night movement bring together the essentials of Cartier watchmaking.

The Mysterious movement, an icon of Cartier Fine Watchmaking, was born in 1912 of a collaboration between Louis Cartier and watchmaker Maurice Coüet, whose first mystery clock, known as Model A, was inspired by the clocks of the famous illusionist and father of modern magic, Jean-Eugène Robert-Houdin.
This year Cartier honours the historic movement in two new watchmaking interpretations: a Skeleton Mysterious Double Tourbillon, and for the very first time, a Mysterious Day & Night movement. These stylish timepieces are imbued with the excellence of Cartier watchmaking craftsmanship. 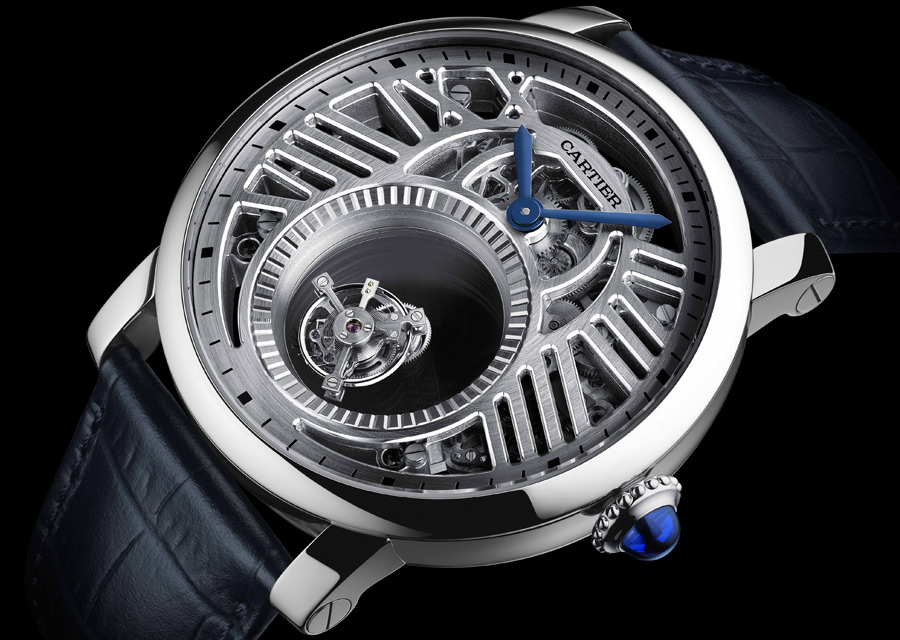 The Mysterious Double Tourbillon movement created at the La Chaux-de-Fonds Manufacture in 2013 represents a milestone in Cartier watchmaking history: the tourbillon appears to be suspended in mid-air with no connection to the rest of the movement. As a double flying tourbillon, it effects a complete rotation in 60 seconds, while the tourbillon cage performs a second rotation in which each round takes 5 minutes.

This balancing act is all the more formidable in view of the finely constructed case and painstaking craftsmanship. All of the components are hand-finished: the bridges chamfered, flanks drawn and screw heads polished. This year’s addition of skeletonised bridges in the shape of Roman numerals enhances the lightness and power of the watch. The magic of the mysterious is encased in the transparency of the skeleton. The curves of the watch and mysterious movement are complemented by the stark geometric openwork architecture of the skeletonised bridges. 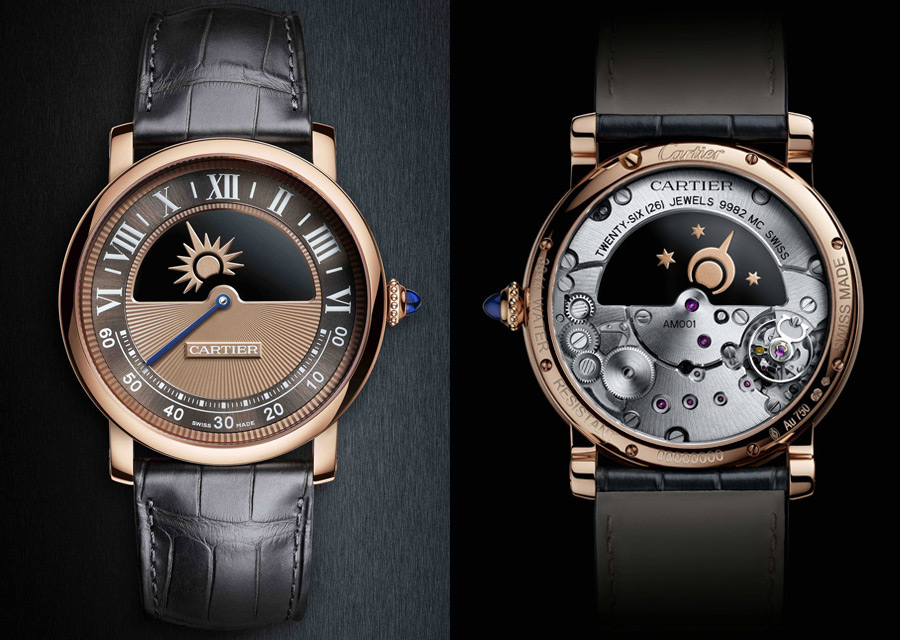 The Rotonde de Cartier watch lends its generous dial to two historic Cartier complications: the mysterious movement and the Day/Night indicator. These two complications are part of Cartier’s watchmaking heritage. Both dating from 1912, the mysterious movement was created for the Model A mystery clock, while the day/night movement was part of the Comet clock (also known as the Planet clock).

Cartier now brings these two complications together for the first time in Fine Watchmaking: the sun, driven from left to right by the mysterious movement, appears to levitate in the top half of the dial, before handing over to the moon. The sun and moon, two stylised heavenly bodies, in turn indicate the hours of the day and night when the retrograde minutes are displayed in the bottom half of the dial. This airborne reading of the time is magnified by the juxtaposition of the radiating guilloché and satin-brushed sunray finish on the dial.