For TAG Heuer, years go by…and birthdays too. Last year, the Swiss manufacturer blew out the 50 candles of the emblematic Monaco, and this year, TAG Heuer is celebrating its 160th anniversary. The 1860-founded brand has already kicked off the festivities with the presentation of a new Carrera model revisiting the historic timepiece’s design, all the while integrating the latest-generation automatic Heuer 02 chronograph movement. The monochrome-spirited limited edition of only 1,860 pieces which will only be available from June. Be patient… 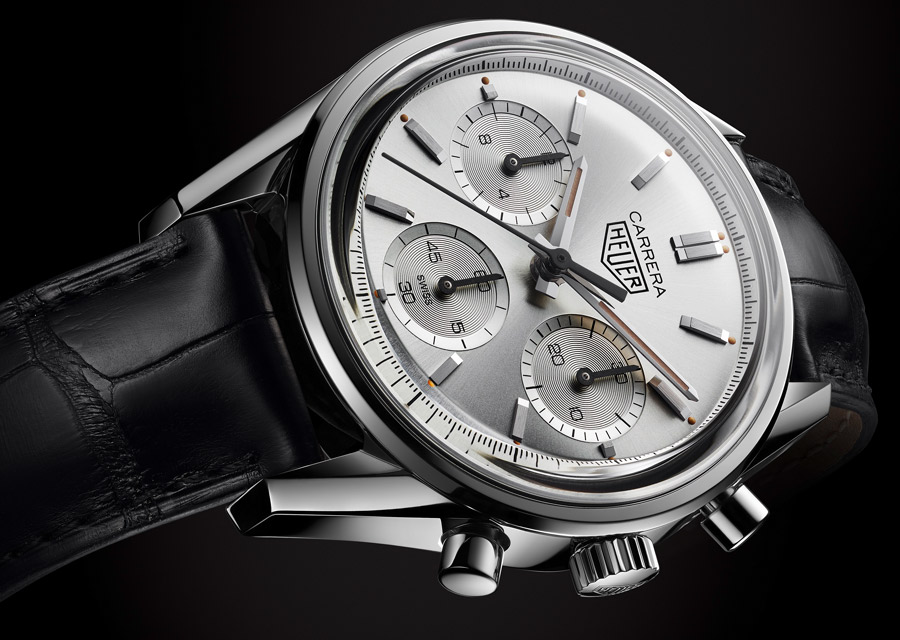 It was in Saint-Imier, a small town in the Swiss Jura mountains, that the story of TAG Heuer began. More precisely, 1860 was the year when then 20-year-old Edouard Heuer opened his watchmaking workshop. His first pocket chronographs then emerged in 1882, were produced in large amounts, and were rewarded a few years later with a silver medal at the Paris Universal Exhibition of 1889.

At that time, the company was just known as Heuer. But it became over time an undisputed reference in the timekeeping field with the development of increasingly precise measuring instruments for major sporting events. Its final name did not appear until 1985, following its affiliation with the TAG (Techniques d’Avant-Garde) group, then owner of the McLaren F1 team.

Whlle the emblematic Autavia model was born in 1933, it was under the impetus of Jack Heuer—who joined the company at the end of the 1950s—that the Manufacture created two other iconic chronographs. The Carrera models—created in 1963—and the Monaco in 1969 (read our article on the famous square model by TAG Heuer here). Unsurprisingly, it is with the first one that the Manufacture will begin the festivities for this new year dedicated to its 160th anniversary.

For the Carrera, it all began in 1962, when motorsport enthusiast Jack Heuer became interested in the famous Mexico-held ‘Carrera Panamericana’ race. It is one of the most treacherous road races in the world. But for Jack Heuer, it sounded like an obvious name for his next chronograph. Which is understandable: in Spanish, the word ‘carrera’ designates any and all of road, race, career and course. One year later, the first Heuer Carrera models were produced. With its round box with sober lines and studied proportions, it quickly seduced both amateurs and professional drivers. The 36 mm-wide instrument does not interfere with wrist movements whilst guaranteeing excellent readability of the information displayed on the dial.

Of all his most historic and iconic versions, it was the 1964 opus—which was nicknamed ‘2447S’—that TAG Heuer chose to revisit in honour of its 2020 anniversary. With a monochrome silver dial and three counters, it is one of the brand’s most iconic versions. It is a visual success: its polished steel remains very close to the first model with its integral ‘silver’ face. And this material is nuanced by different surface finishes: a starburst silver-coloured dial with three azure satin finish to contrast the counters (placed as follows: small seconds at 6 o’clock, 30 minutes and 12 hours stopwatch at 3 o’clock and 9 o’clock). Let us also note the beige colour of the SuperLuminova® for the hands and small marker dots, which accentuates the watch’s retro appearance. Not forgetting the emblematic CARRERA inscription and the HEUER logo. Well done. 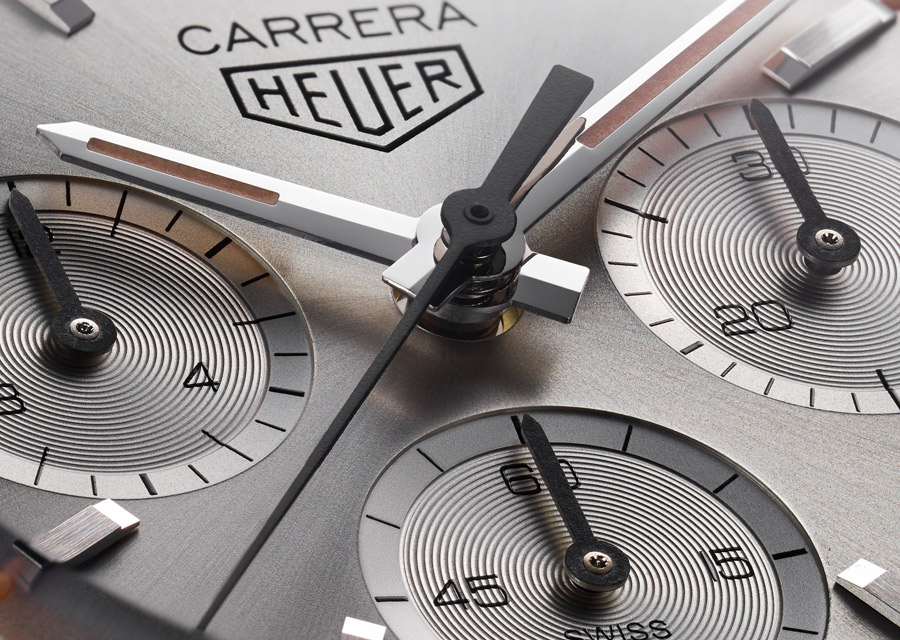 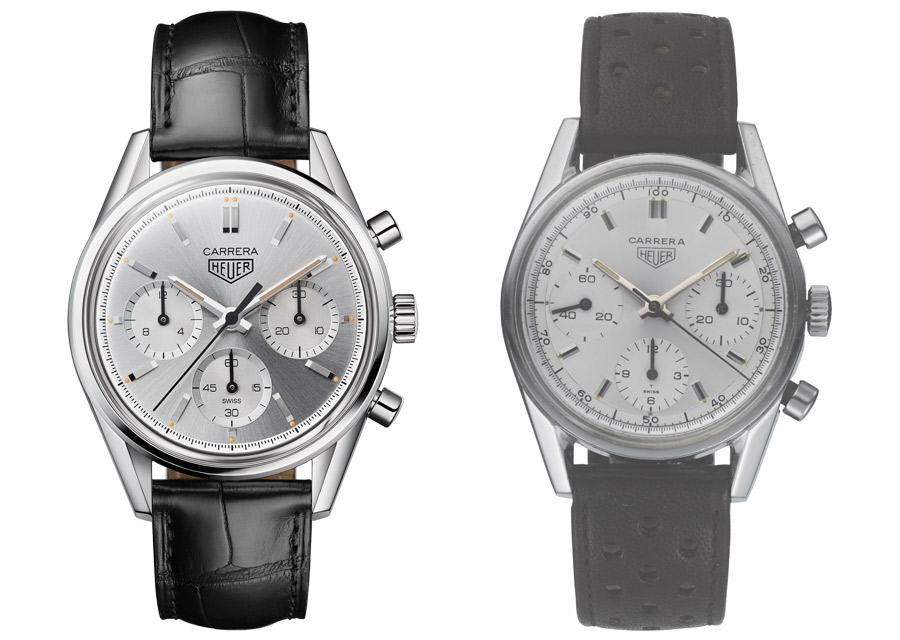 Vintage on the Outside, Modern on the Inside

As is the case of numerous reissues—whatever the brand—the aesthetic tribute is accompanied by the technological innovations brought on by twenty-first-century watchmaking. The domed crystal is made of anti-reflective sapphire and the case is water-resistant up to 100 metres (10 bar). The 2020 watch does have small differences compared to the original instrument—no scale calibrated in 100, different positions of the counters and drawing of the lugs, an important diameter of 39 mm instead of 36—and the explanation for those differences may be sought on the side of the ‘engine’ which animates this chronograph. As a matter of fact, it is powered by the latest generation Heuer Calibre 02, whose design is obviously not the same as the 1963 Valjoux 72 movement. The Heuer Calibre 02, with chronograph function, was entirely made by the brand’s manufacture, and sets itself aside with its comfortable 80-hour power reserve, its thinness of 6.95 mm, its vertical clutch, and its column wheel. 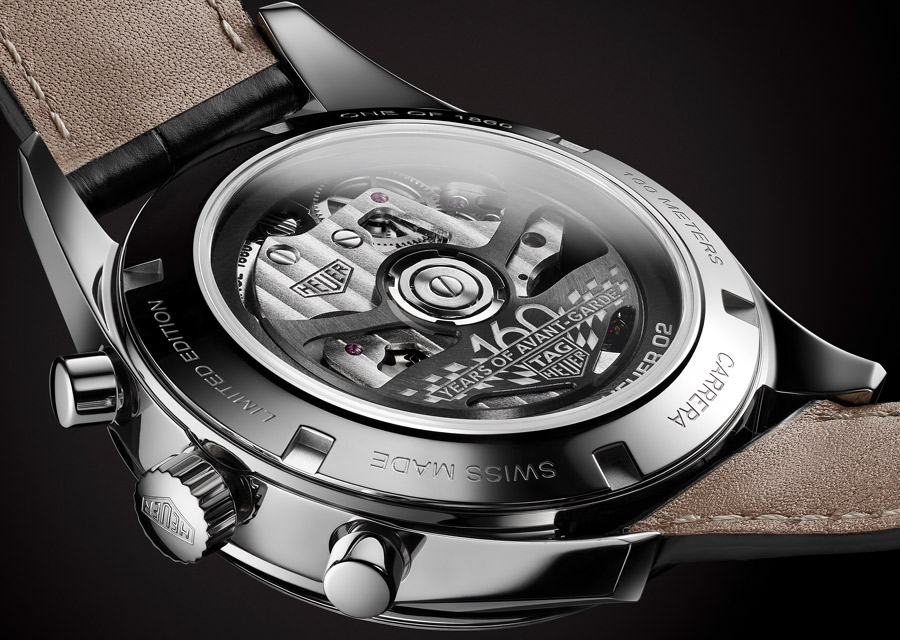 Presented on a black alligator strap, this model is limited to 1,860 pieces—a nod to the year Heuer was founded. While there is no mention of the presence of the Heuer Calibre 02 on the face (which is a good thing), one can simply turn the watch over to observe, through the sapphire crystal caseback, the gears of the movement, which feature an oscillating weight adorned with a lacquered-filled engraving that distinguishes it as an anniversary edition.

Here’s to a very nice appetizer that certainly heralds an equally seductive sequel from TAG Heuer for this special year.