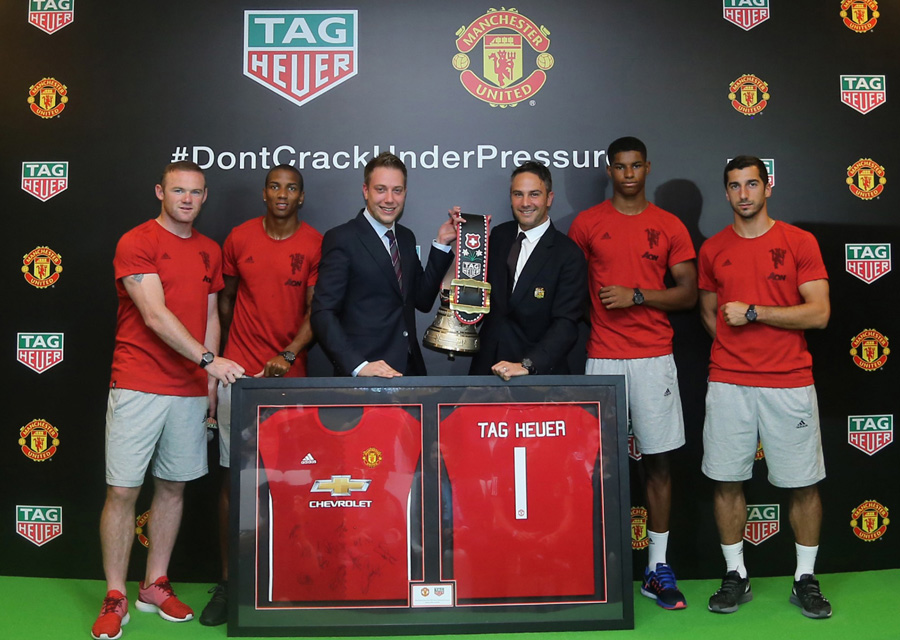 Beijing, China, 24 July 2016 at the Sheraton Hotel Beijing, Manchester United unveiled TAG Heuer as its new Official Timekeeper and Global Partner. The agreement between the luxury Swiss Avant-Garde watchmaker and the world’s most popular football club has been celebrated in Beijing with United players.

The first team is currently in China for Tour 2016 presented by Aon, preparing for the season ahead. To mark their arrival in the capital, players joined Manchester United Commercial Director Jamie Reigle and Loic Biver, Head of Marketing of LVMH Watch & Jewellery Greater China, to herald a new phase in their companies’ history with this global partnership.

United Ambassadors Ji-sung Park and Denis Irwin, two of the club’s most decorated players (who between them notched 11 Premier League titles and two Champions Leagues), were also at the event along with Leo Poon, TAG Heuer General Manager of Greater China. 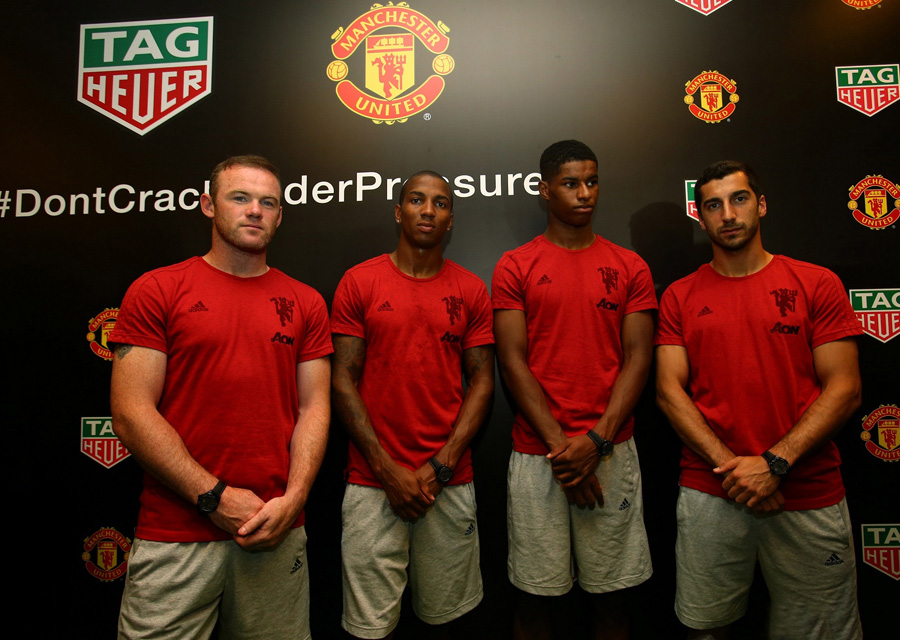 Jean-Claude Biver, TAG heuer CEO and President of the LVMH Watch Division says: “Manchester United is the most prestigious football team in the world. This collaboration, rich in a host of synergies, will give TAG Heuer a massive boost along the road, especially in China. TAG Heuer doesn’t “sponsor”, we “partner” with iconic teams, organizations, and people who share similar values and a strong vision. With Manchester United, we communicate passion, emotion, joy, dreams, team spirit, organization, strategy and finally victory, values that are also carried by our brand and more importantly by the people who buy and wear our watches.”

Manchester United’s Group Managing Director, Richard Arnold comments: “This key partnership has been struck at a very exciting moment in our history. Led by our new Manager we’re proud to be in China, where we enjoy vast and loyal support, preparing for an important season ahead. In TAG Heuer, we have a partner that will naturally be well-equipped to support us, not least because we share so much. Our rich history can be traced back to the same era; we’ve both overcome challenges and come out stronger in our quest for the highest level of performance. Our prestige is down to our unrelenting commitment to be pioneers. Above all, TAG Heuer understands that the journey always continues, as time does, and I’m very proud to say that we’re now on that journey together.” 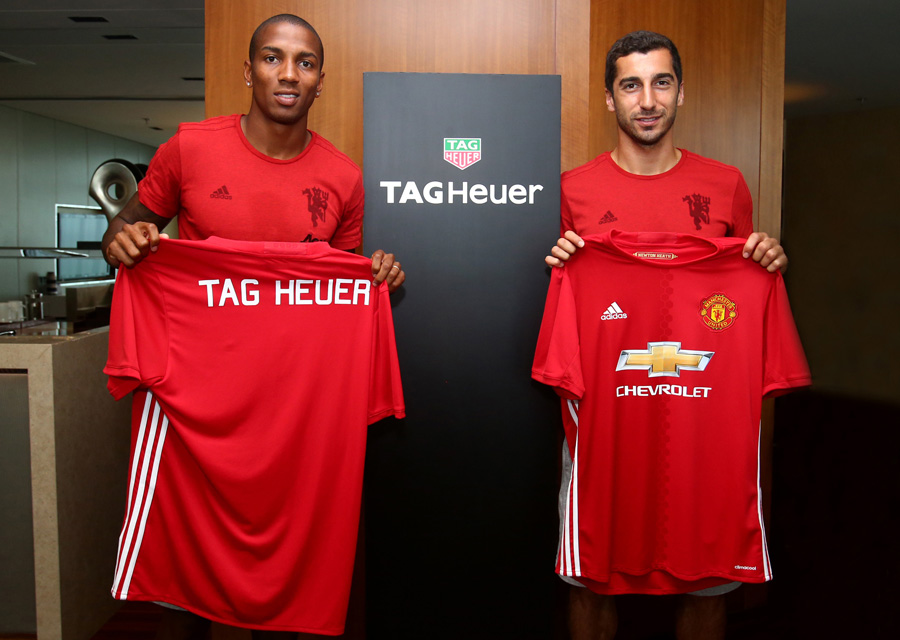 When the team returns to launch its Premier League campaign for 2016/17, TAG Heuer will feature on digital advertising boards at Old Trafford. Specially-crafted TAG Heuer timepieces will be displayed around Manchester United’s stadium, including in the team’s dressing room, as well as the club’s Aon Training Complex and its offices in Manchester, London and Hong Kong. TAG Heuer branding and its brand motto #DontCrackUnderPressure, will feature across all of Manchester United’s digital platforms, including its website and social media.

TAG Heuer has been a Swiss Avant-Garde watchmaker for 155 years, founded in the remote mountain village of Saint Imier in 1860, some 18 years before the formation of Newton Heath in Manchester. TAG Heuer’s unique heritage is built on pushing boundaries to overcome technological restraints and create watches with real racing spirit. The brand has distinguished the history of watchmaking, especially in the field of mechanical chronographs with unparalleled accuracy.

Joining forces with Manchester United allows the company to extend its offering to United’s 659 million followers worldwide, 107 million of whom are from China.

Spanish Football is now on time with TAG Heuer too! 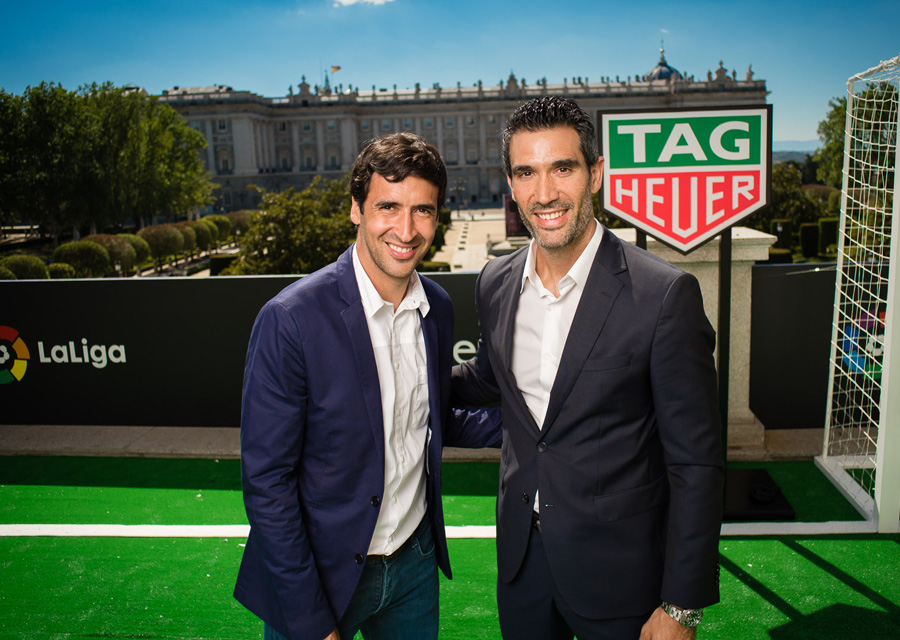 For the occasion, on a stage transformed into a football pitch for the event, legendary players Raúl González (LaLiga country manager in the USA) and Fernando Sanz (LaLiga general director, Middle East and North Africa) accompanied by Blanca Panzano, TAG Heuer general manager in Spain began the countdown to the start of the new season of LaLiga, set to kick off in August. Jean-Claude Biver, TAG Heuer CEO & President of the LVMH Watch division said: “Football is the most popular sport in the world. Football is like a language between people or a religion. With football, we communicate passion, emotion, joy, dreams, team spirit, organization, strategy and finally victory, values that are also carried by our brand and more importantly by the people who buy and wear our watches.”

“We are proud to announce this partnership which sees TAG Heuer teaming up with the world’s top football leagues” added Blanca Panzano, general manager of TAG Heuer in Spain. “This new partnership with LaLiga – one of the greatest institutions in the world of football – is another step forward in keeping with our tagline #DontCrackUnderPressure, which embodies the essence of LaLiga”.

As legendary player Raúl González has noted, “Throughout my career I enjoyed many magical minutes in LaLiga, and it is great that TAG Heuer will be responsible for timing every second of what will be a very exciting season. It’s fantastic for LaLiga, the best football league in the world, to partner with TAG Heuer, a world leading watchmaking brand”. Former player Fernando Sanz added “Today’s TAG Heuer announcement marks the official countdown to the new LaLiga season, and I’m sure fans are watching the seconds until kick-off. I think it promises to be a thrilling season, following on from the great performance of Spanish clubs in the UEFA Champions League and UEFA Europa League, and the star performances from LaLiga players at UEFA Euro 2016 in France.” 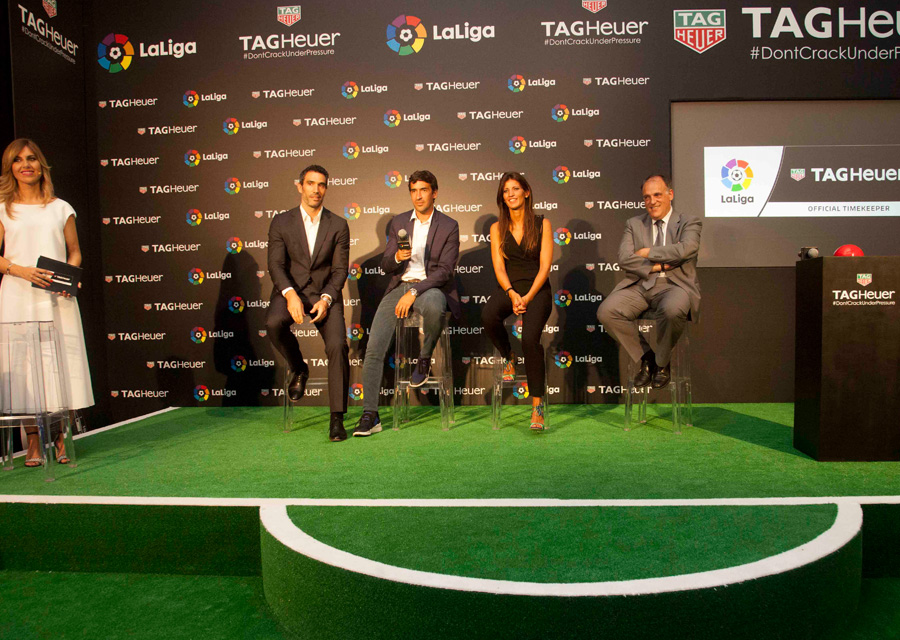 Nationally and internationally renowned for maintaining the very highest levels and quality of play, the LaLiga football competition is a global benchmark, as demonstrated by the Spanish teams in the European competitions in recent years. As a result, it has built a global fan base, with supporters not only from Spain but also many countries in Asia and Latin America. Just check how many games have been won at the last minute, or last seconds even. So you see how much time is sharp and can be decisive for victory.

Its exceptionally high standards and quality are only two of the characteristics which it shares with TAG Heuer, but these are not the only common values. Both partners boast extensive experience in their field, and trust in the importance of accuracy and precision in timekeeping and, of course, in every movement. Every second counts both for the watch brand and for every player in the twenty teams in the Spanish LaLiga, as one minute can be decisive in turning over the scoreboard. 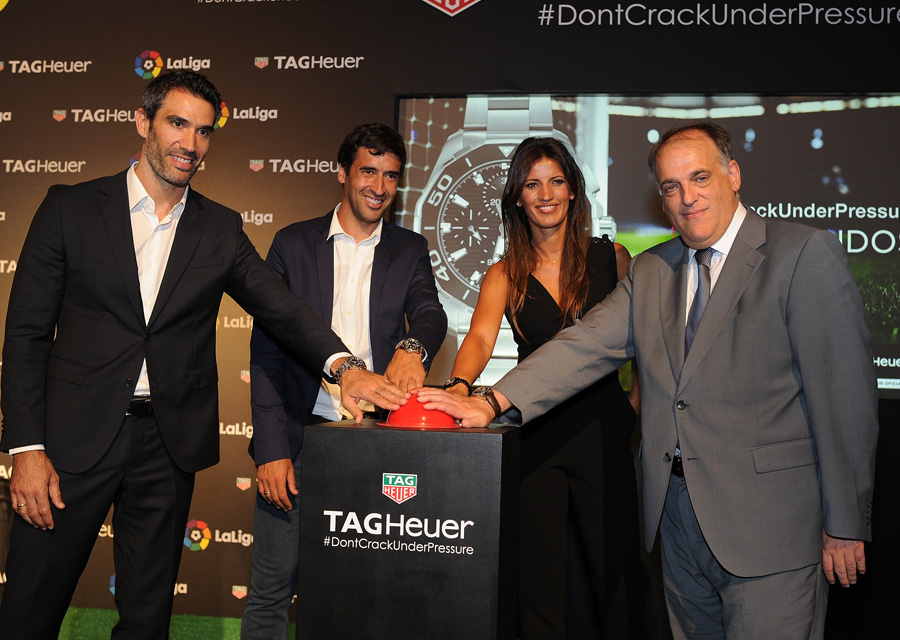 With this new partnership, the Spanish professional football league is adopting the philosophy of the Swiss watch brand, summed up in its tagline Don’t Crack Under Pressure, to strengthen its teams and to ensure that they don’t crack under pressure even during the most stressful moments of each of the 38 matches lined up next season.

Two events held simultaneously in Hong Kong and London by the Premier League & TAG Heuer, to announce and seal their new agreement. 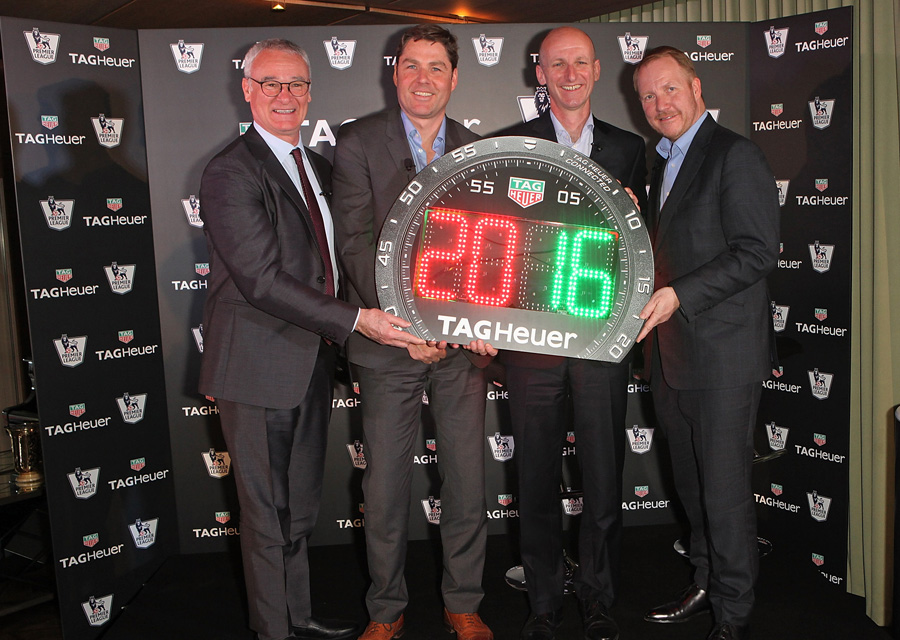 26th April 2016, he Swiss watch brand TAG Heuer is very proud to announce today that it has been selected as the first ever Official Timekeeper and Official Watch of the Premier League.

Already the Official Timekeeper for the German Bundesliga, MLS (Major Soccer League) in the USA, the 2016 Copa America which will take place in the USA in June, the Chinese Football Association Super League, and the Australian National Football team, TAG Heuer is now also the partner of the prestigious English Championship.

The new partnership between the Premier League and TAG Heuer is being jointly unveiled in simultaneous announcements taking place in London and Hong Kong.

A duplex connection enables communication between the two events:

– In Hong Kong, Jean-Claude Biver, CEO of TAG Heuer and President of the LVMH Group Watch Division, symbolically sealed the deal with Tom Greenwood representing the Premier League, and the Premier League legend Peter Schmeichel*, around a wheel of the Alpine cheese Mr Biver produces on his pasture in Switzerland, in the company of guests. The ceremony took place in the Four Seasons Hotel, and clearly demonstrated that English football is as popular in Asia as it is back home in the UK.

– In London, Richard Masters, Managing Director of the Premier League, Rob Diver, Managing Director of TAG Heuer UK, and Mike Riley, General Manager of the League’s referees simultaneously sealed the deal at Café Royal in the heart of the capital, joined by many guests, including Claudio Ranieri**. 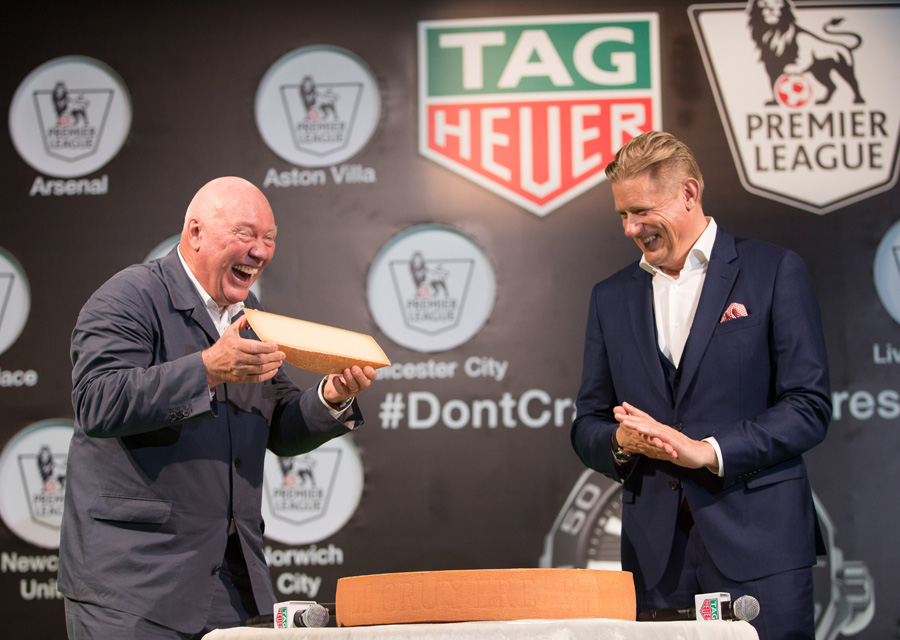 Jean-Claude Biver, CEO of TAG Heuer and Chairman of the LVMH Watch Division, stated: “Our partnership with the Premier League seals the important and strong involvement in football of TAG Heuer. We are particularly proud and pleased about this partnership, as it will be key in the promotion of our brand and its football activities in Asia and in the whole world.”

This agreement with the Premier League ensures that TAG Heuer will be visible on all of the fourth official’s boards, now shaped like a TAG Heuer Carrera chronograph with a tachometer scale, the Swiss watch brand’s immediately recognisable piece. The brand name will also appear in full on the lower section of the board.

The referees will sport the new TAG Heuer Connected smartwatch, developed by the Swiss brand in conjunction with Intel and Google Android Wear.

Finally, the TAG Heuer logo will appear during Premier League match broadcasts to 730 million homes in 185 countries across the world. Of course, TAG Heuer branding and its brand motto, #DontCrackUnderPressure, will also feature across all of the Premier League’s digital platforms, including its website and social media. 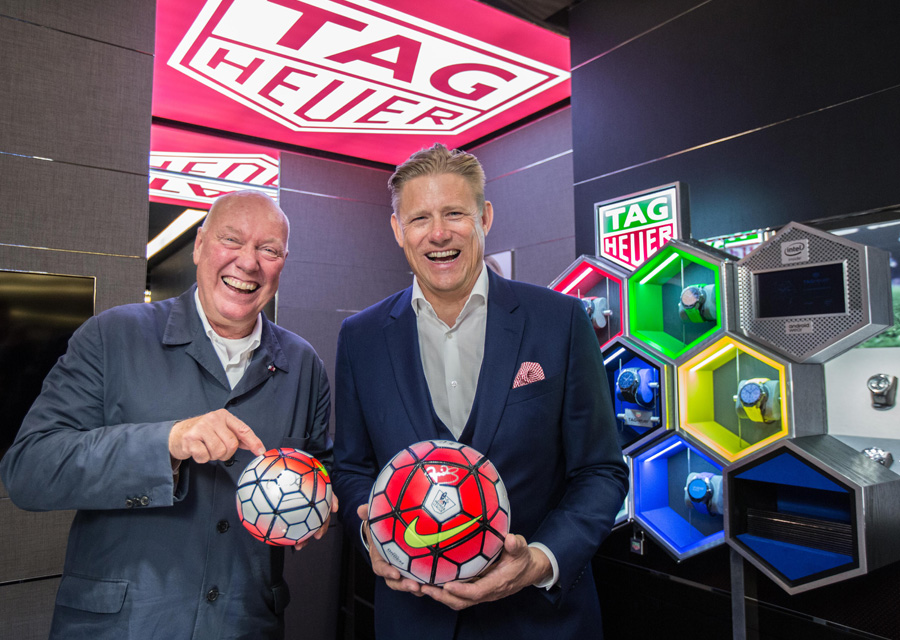 The Premier League is one of the most popular competitions in global sport. Across the globe, fans of English football follow the matches each week in the UK, in Asia, in Europe, in Australia, in the US and in South America: the notoriety and buzz around the Premier League is far reaching.

The Premier League is also deemed to be one of the most physically demanding for the players: the League runs from August to May each year, and sees 20 English professional clubs battle it out over 38 match rounds with the winner crowned as Premier League champion. This creates a suspense and a magic which ensures that the Premier League is a truly gripping sporting event.

*Peter Schmeichel is a legend in English Football, one of the top keepers of the 20th century, remembered for his most successful years at English club Manchester United. A Premier League winner, he also captained to the 1999 UEFA Champions League to complete a famous Treble, and for winning UEFA Euro 1992 with Denmark. He was inducted into the English Football Hall of Fame in recognition of his impact on the English game. In March 2004, he was named as one of the “125 greatest living footballers”, at the FIFA 100 celebrations. Peter’s son Kasper is the current goalkeeper for Leicester City who are top of the Premier League. Kasper also represents the Denmark national team.

**Claudio Ranieri is an Italian football manager and former player who is the current manager of Premier League club Leicester City. He – with his team – perfectly embodies the

#DontCrackUnderPressure spirit. In his first season in charge of Leicester City, Ranieri has held the club at the top of the 2015/16 Premier League, after the club narrowly avoided relegation the season prior.