Paris, Moscow, Scotland, Morocco, Uzbekistan, Ethiopia: this is the trip followed by Steve McCurry for the second part of the Overseas Tour of Vacheron Constantin.
Through the lens of the photographer, rare and unasual places reveal their beauty and reflect man’s ability to “imagine, create, and transform.” His images offer a different view of the world, enriched by values shared with the watchmaking Maison. 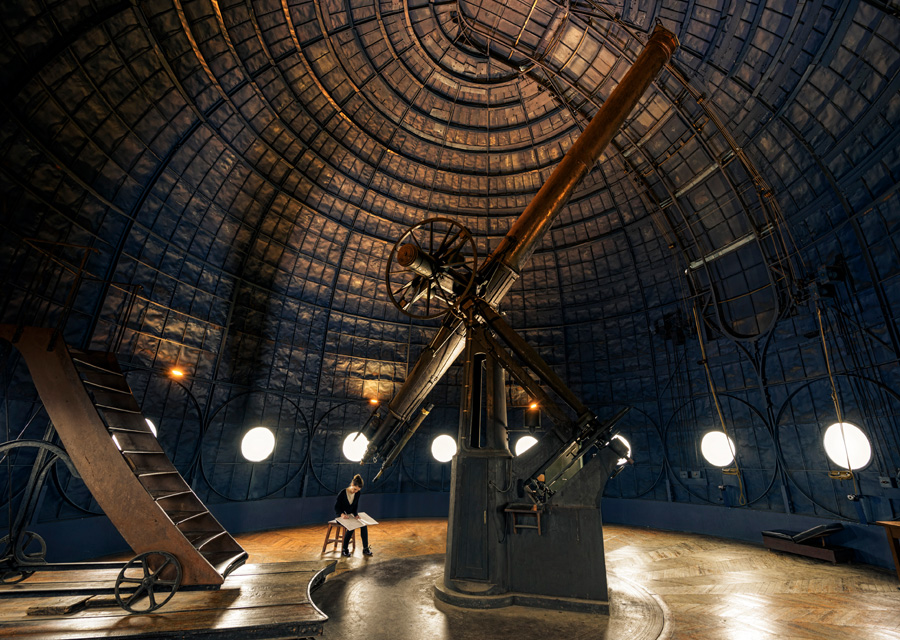 Paris Astronomical Observatory: time for conquest
The Paris Astronomical Observatory is the oldest in the world still in operation. Built in 1667, this centre of knowledge that witnessed the birth of new sciences such as geodesy and meteorology remains firmly closed to the public. Set in a lush green environment at the heart of Paris, its historical dome houses an astronomical telescope pointing towards the sky and drawing the visitor’s gaze towards infinite expanses where time and space meet. 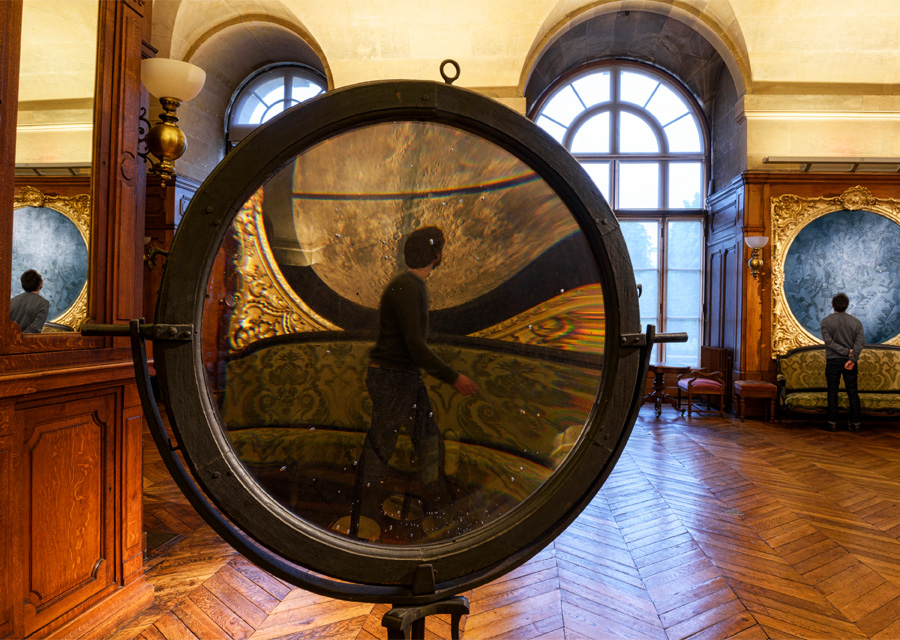 Steve McCurry’s perspective:
“This was my first time entering the dome of an observatory. It was fascinating to have the opportunity to visit a place made possible by human curiosity and ingenuity. The Paris Observatory was technologically revolutionary for its time, and is still one of the largest astronomical centers of the world. The Overseas Tour itself is driven by the same curiosity about the world that is at the heart of this location.” 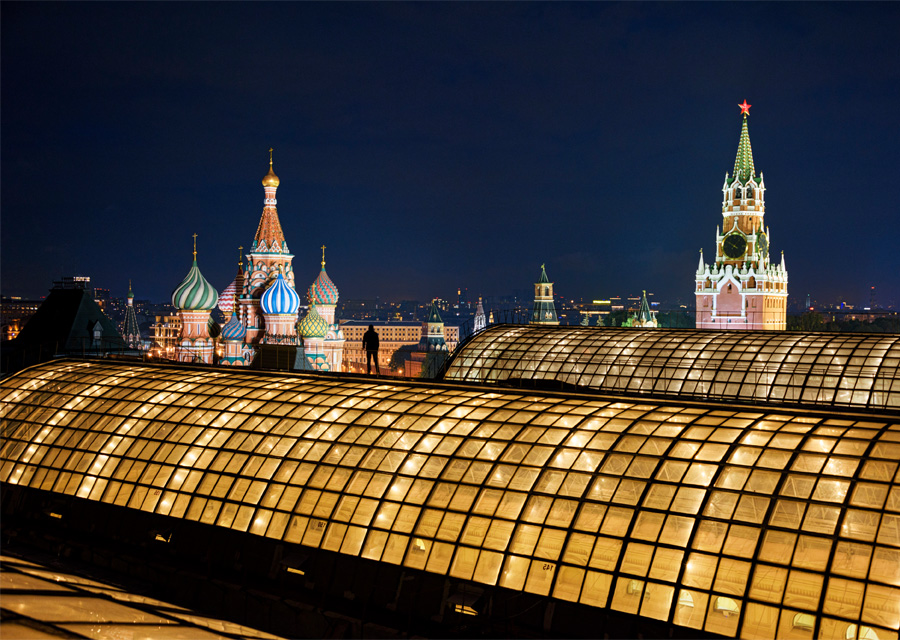 Red Square seen from the GUM roof: Moscow: time for perspective
Overlooking one of the world’s most famous squares, the GUM roof represents a technical and architectural feat. Built in 1893, its glass dome with monumental iron arches spans almost 2.5 hectares. Standing at the very top of its majestic vaults means enjoying the privilege of a unique perspective on the Red Square, almost touching the bulb-shaped towers of Saint Basil’s Cathedral, and feeling the vibrations or more than one thousand years of history as well as an entire population. 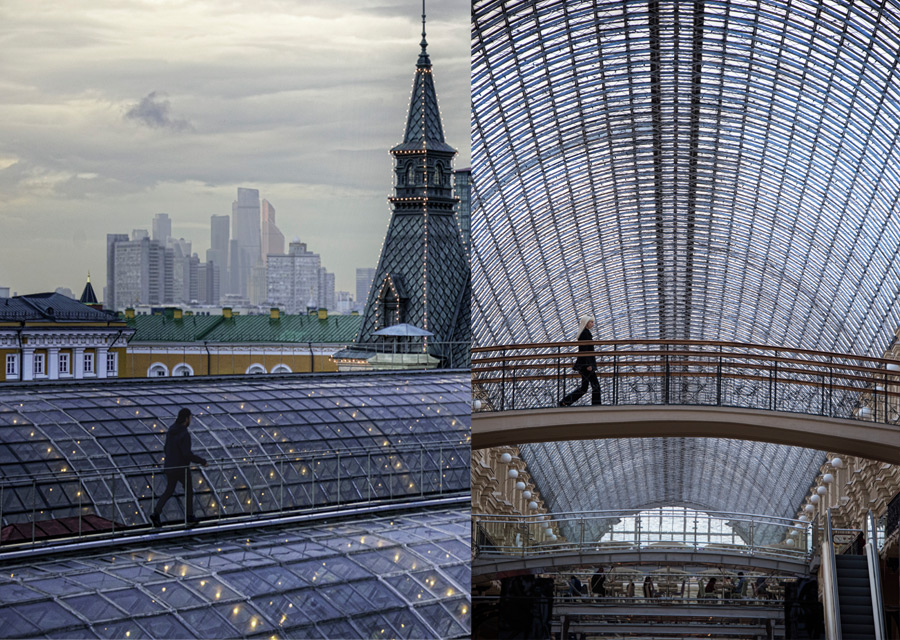 Steve McCurry’s perspective:
“Managing to shoot the Red Square from a new vantage point was made possible by the exceptional access granted to the GUM roof. The square topped by colourful steeples thus revealed itself in a truly unique way. Once night fell, this perspective took on a whole new and even more magical dimension when the GUM glass roof was lit up.” 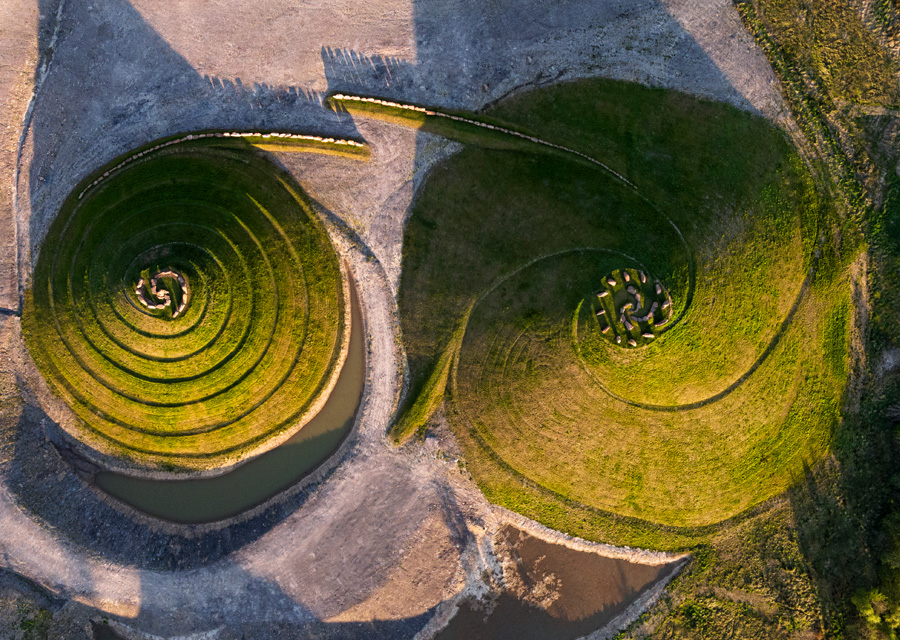 Crawick Multiverse, Scotland: time for inspiration
The Crawick Multiverse site is a gem nestling in the hills at the heart of the Dumfries region. The visionary architect and landscape artist Charles Jenks has transformed a former open cast coal mine into a landscape art design. The ecology of the site and the monoliths found there inspired its construction based on space, astronomy and cosmology. Extending an invitation to journey from the centre of the Earth to the furthermost galaxies, it brings universes together through the unique and far-reaching perspective of its inspired creator. 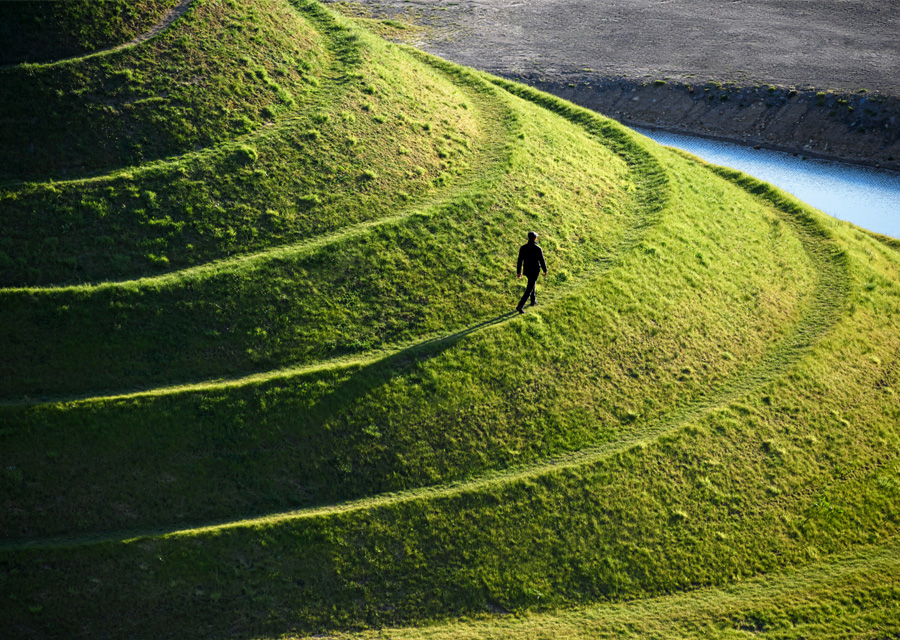 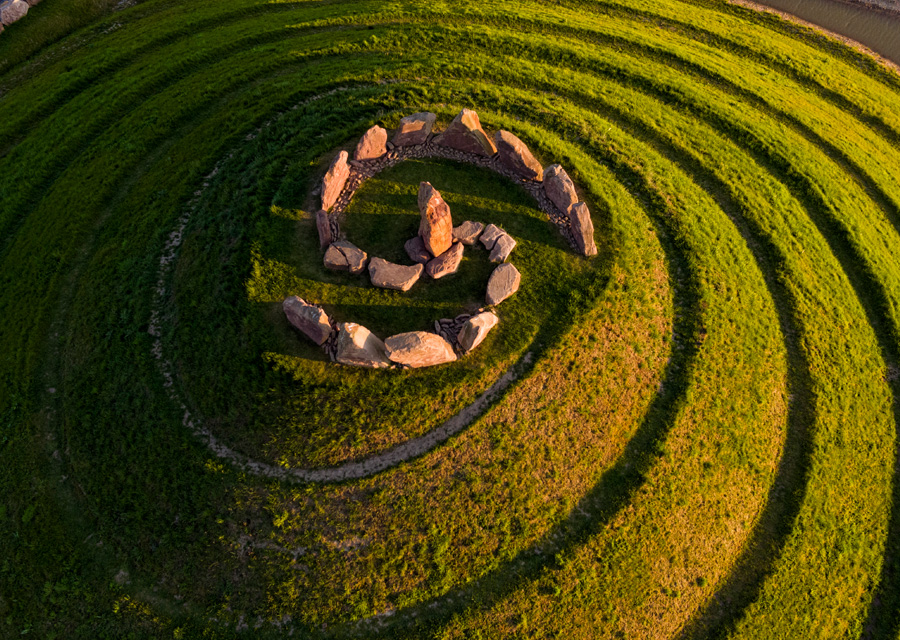 Steve McCurry’s perspective:
“I was previously unaware of this location, and pleasantly surprised by its ancient mystique despite being a new installation. These man-made formations typify Scotland’s great history of similar formations whose purpose are still unknown to us today. There is a cosmic feeling evoked by these structures.” 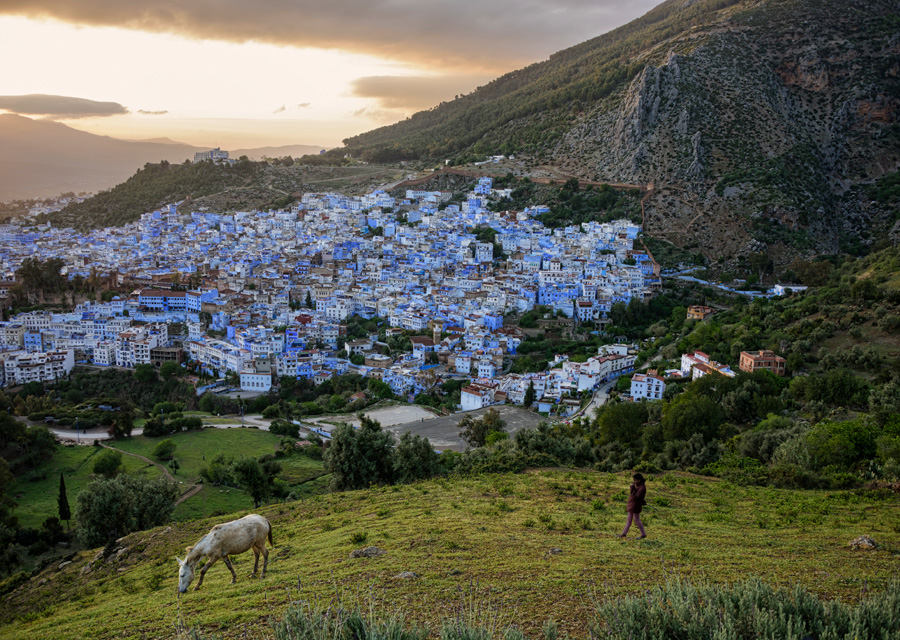 Chefchaouen, Morocco: time for tradition
For almost 100 years, the inhabitants of this small town have been colouring it in blue. Whatever the explanation behind this tradition, it is perpetuated because locals found it beautiful and draw from it their identity and their distinctiveness, since no other village in the world features such a monochrome beauty, like an ocean in the desert. 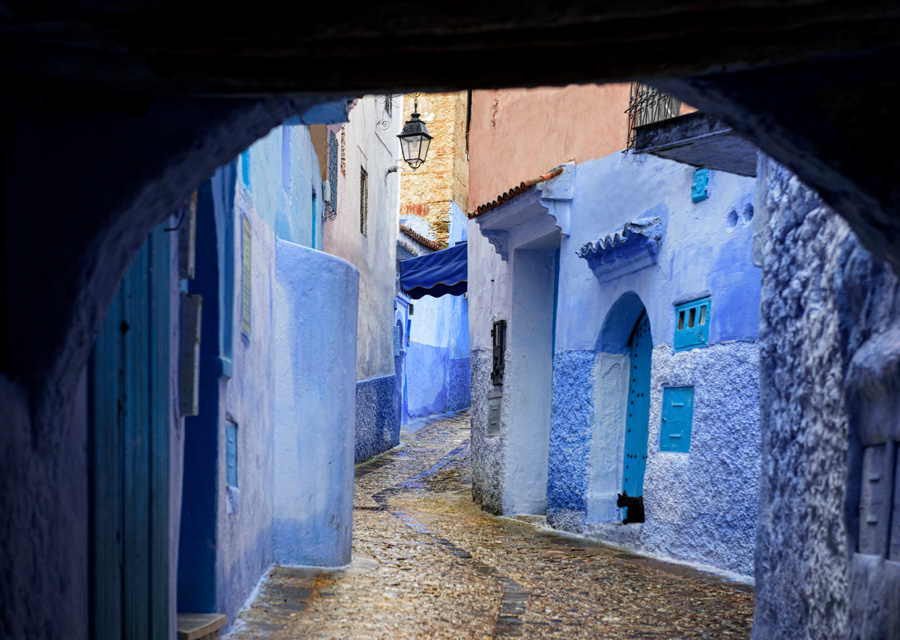 Steve McCurry’s perspective:
“I have visited a similar blue location in India. There is a poetic story likening this blue city to the skies or heaven. Viewing the town at night from further away provides a magical vantage point where the warm-hued lights give a nice contrast to the blue-painted city.” 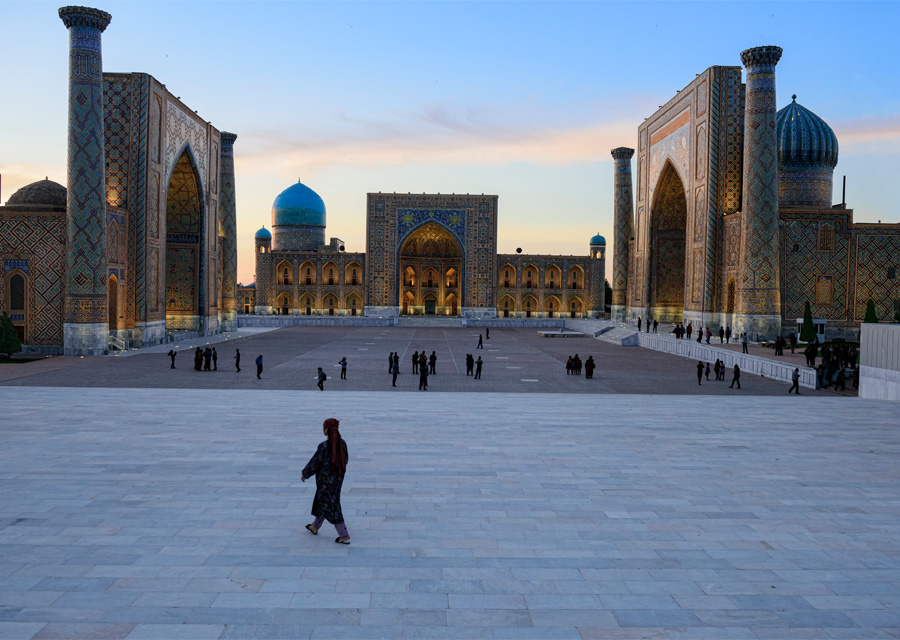 Samarkand, Uzbekistan: time for confluence
Samarkand, which lies at a strategic geographical and cultural crossroads, on the Silk Route in the direction of China, is one of the most ancient inhabited cities of Central Asia. It was successively Greek, Persian, Turkish, Mongolian and Iranian, during the heyday of each of these civilisations. The mausoleums and other buildings of its necropolis are truly magnificent, graced with splendid shimmering ceramic decorations, ornate domes and all the magic of Middle Eastern art that has found its way through the ages to dazzle modern-day travellers. 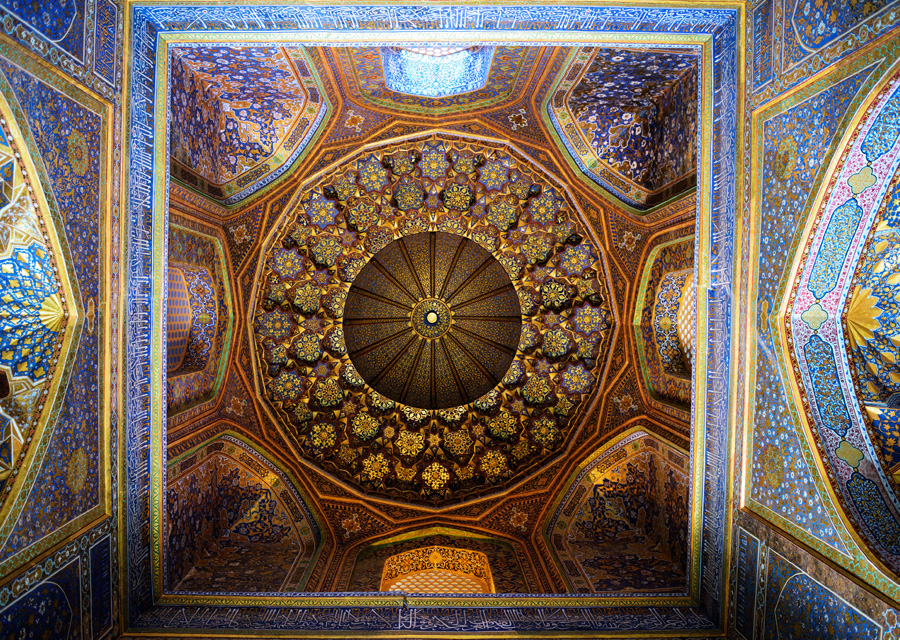 Steve McCurry’s perspective:
“Having been there 10 years ago, I was familiar with the location. However, the timeless architecture still holds just as striking and iconic as it did when it was built around 2,500 years ago. The ornate designs and wondrous colors are a marvel to behold.” 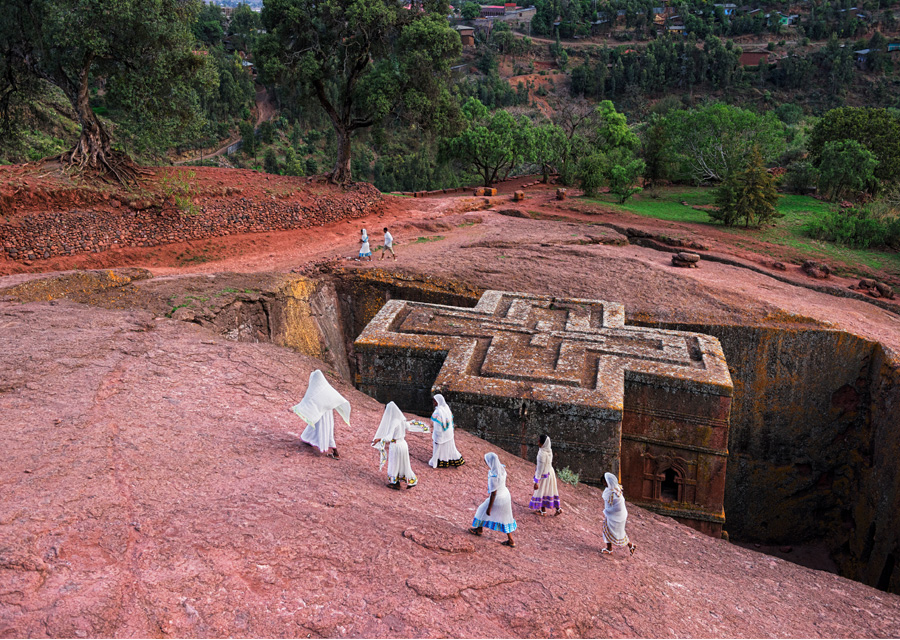 Lalibela, Ethiopia: time for symbolism
Carved out of rock at the top of a hill in the 13th century, Lalibela was built as a “new Jerusalem”.
Its 11 buildings symbolise earthly and heavenly Jerusalem and even feature a trench representing the River Jordan. Simple, monolithic and free of any ornaments or statues. This strange rock-hewn site featuring a roof level with the ground invites travellers to enter a world of utter simplicity and humility. 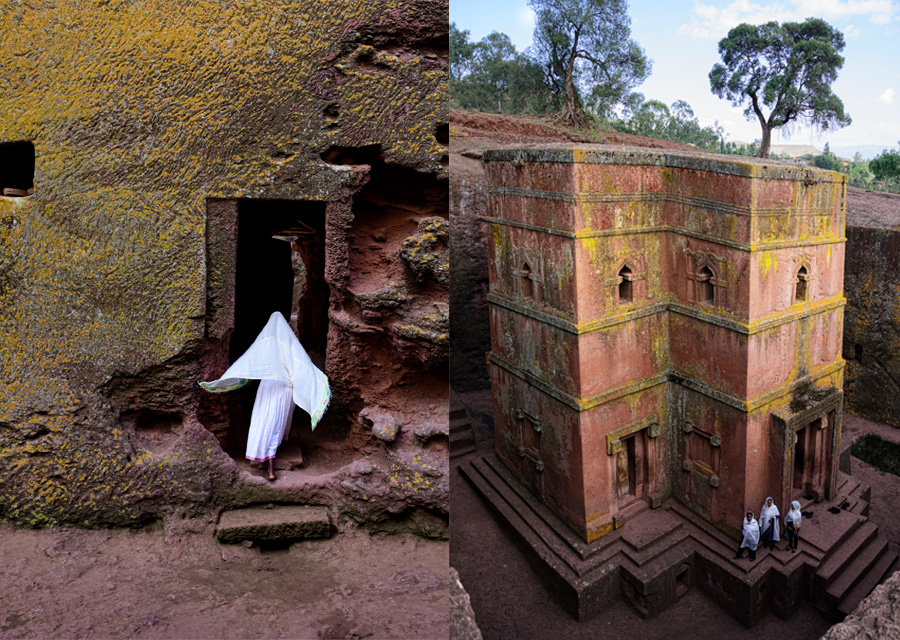 Steve McCurry’s perspective:
“Lalibela has a great history, and is distinguishable by its churches which are cut out of solid stone from the top down. It’s a unique structure not unlike the pyramids or medieval cathedrals. Though built 700 years ago, this location continues to be a point of pilgrimage today.”

The Overseas Tour
Vacheron Constantin has invited the legendary photographer Steve McCurry to share his unique perspective on the world in order to illustrate the new Overseas collection, the horological embodiment of its “spirit of travel”.
The Maison and Steve McCurry wished to travel the world in 12 locations, 12 sites brimming with values chiming with those of Vacheron Constantin and at times unusual or inaccessible, all captured through the photographer’s lens.