Enhanced by the contrast between black Grand Feu enamel and vibrant miniature painting, a lion, flamingo and koi carp conceived in the Jaquet Droz Ateliers d’Art awaken a desire to travel to exotic destinations with a new interpretation. 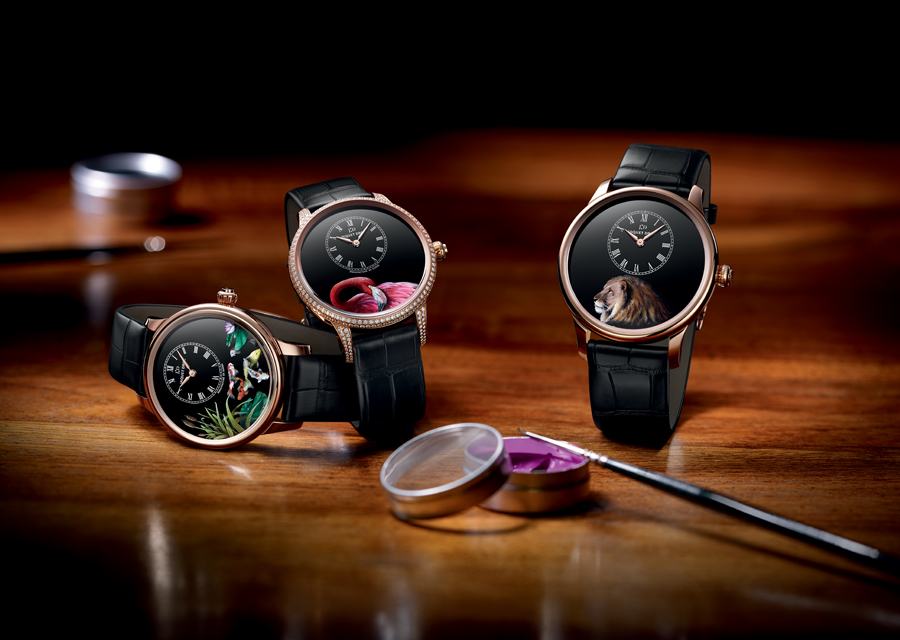 The majestic, spectacular and symbolic creatures from Africa, the Caribbean and Asia – the lion, the flamingo, and the koi carp – are Jaquet Droz’s guests of honor on three timepieces that bring together the very best of its artisans’ mastery. These all-new versions of the Petite Heure Minute were brought to life in La Chaux-de-Fonds, the cradle of the brand, and combine miniature painting and black Grand Feu enamel to awaken the desire to travel to new horizons. Born during the Age of Enlightenment, Pierre Jaquet-Droz was a keen traveler. These three watches resonate with his avant-garde spirit and curiosity, embodying modernity and creativity – the unique equation that has characterized the soul of Jaquet Droz for almost three hundred years. 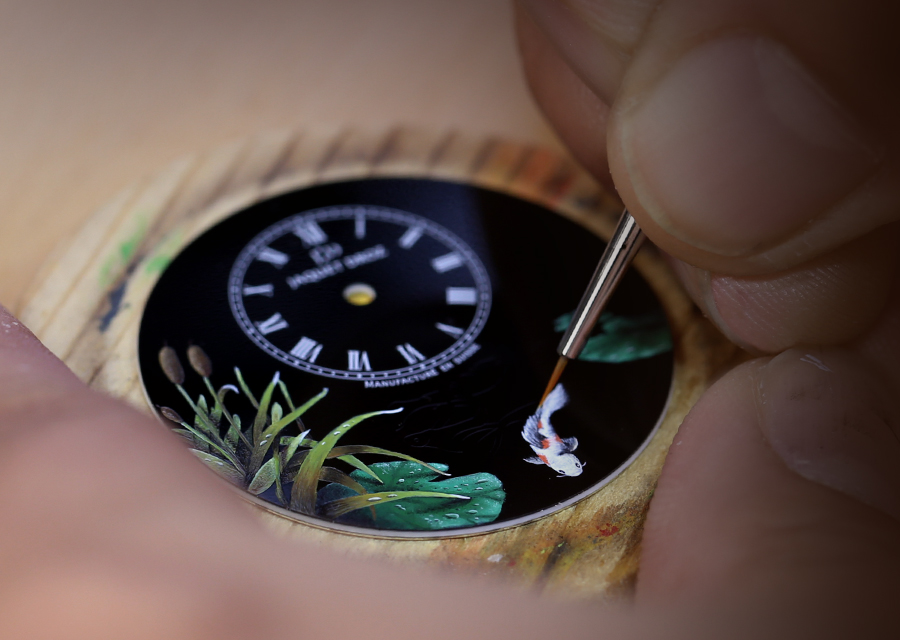 The brand’s artisans, be they painters, engravers or enamelers, have always mastered the art of playing with contrasts. So much so that it can be considered unique to the Ateliers d’Art. In preserving historical techniques while inventing new aesthetics, this department fuses the legend of the past with the beauty of today, thanks to the skilled hands of those who work there. So as to better reveal the eternal splendor of these miniature paintings, here the Grand Feu enamel has been worked to create a deep, uniform black version. The only background capable of enhancing the painter’s precise and infinitely thin brushstrokes, the dense and magnetic enamel gives each ornamental motif its impression of depth. 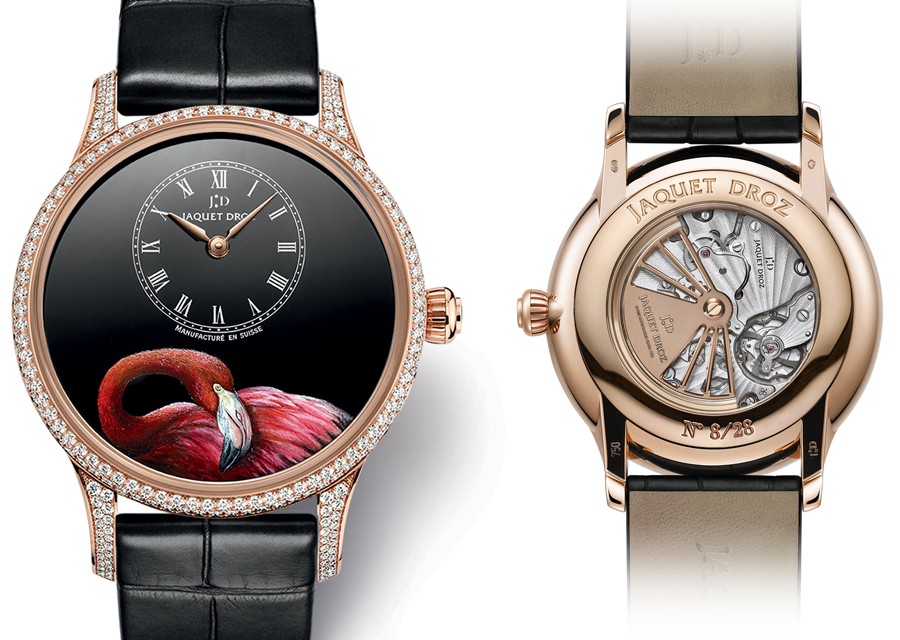 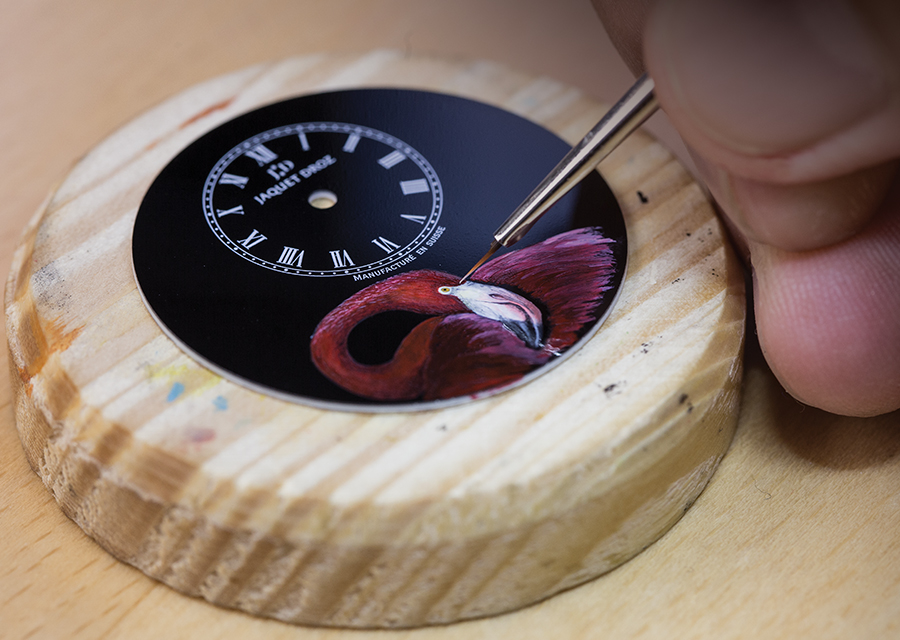 Since time immemorial, the king of the beasts has fascinated powerful figures, as well as poets and artists. A symbol of strength, nobility and power, the lion is encircled with a mane in rich shades of brown, black and russet. Viewed from the side, the unmoving big cat emanates an aura of wisdom and vigor – precious values that are bathed in the light of the red gold case, which measures a generous 43 mm in diameter. With its bold plumage and impressive beak, the surprising Caribbean flamingo immediately catches the eye. 248 brilliant-cut diamonds are set along the 39 mm diameter red gold case, adding their brilliance to this eminently elegant spectacle of the bird as it seemingly prepares to unfurl its long, majestic neck. The koi carp swim inside a 39 mm diameter case amid reeds and lotus flowers. A symbol of longevity, the fish, with their multicolored scales, dance an aquatic ballet that has always been cherished in Asia for its grace and serenity. The koi carp on this model also evoke the West’s fascination for the Far East in the 18th century, during the lifetime of Pierre Jaquet-Droz. It’s no surprise therefore that his watch creations were the first to penetrate the walls of the Forbidden City. 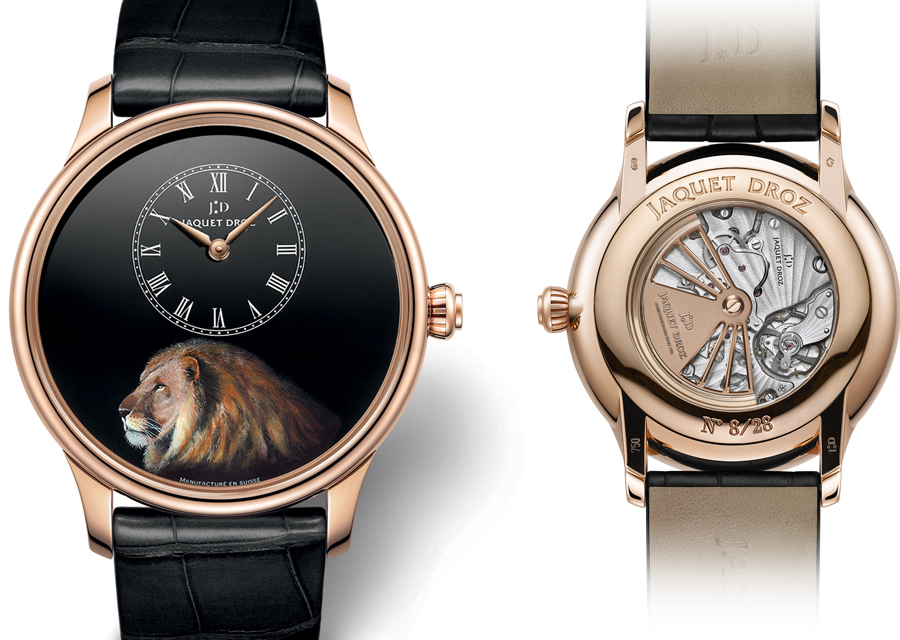 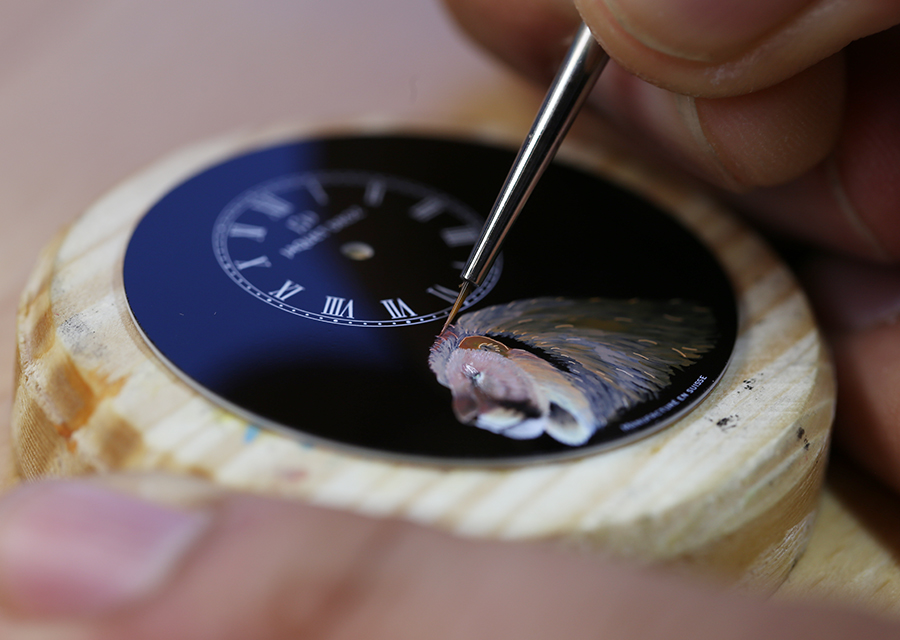 Extraordinarily vivid and captured with almost photographic precision, the animals appear as if they could move at any moment. These lifelike portraits are available as just 28 pieces for each version and come with a certificate of authenticity from the Ateliers d’Art, signed by the artisan whose time was devoted to its creation. Fitted with a self-winding mechanical movement and featuring a 68-hour power reserve, these three Petite Heure Minute watches serve as a reminder that the natural world is never as beautiful as when seen through the prism of exclusivity.

“Some watches tell time, some tell a story”