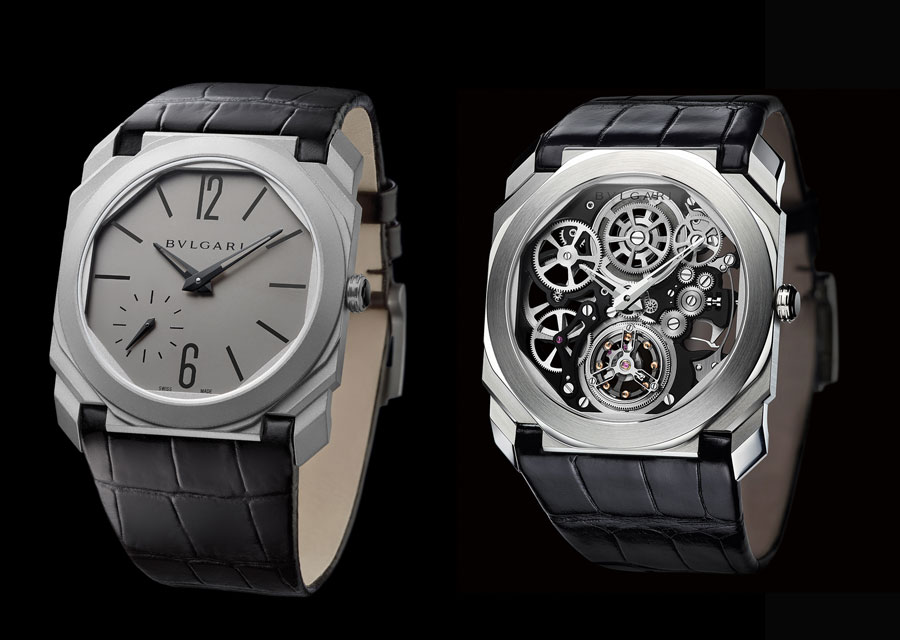 Bulgari is once again the spotlight, proudly presenting its third successive world record. The Octo Finissimo Automatic is the slimmest ultra-thin self-winding watch on the market to date. After introducing its Tourbillon in 2014 and the Minute Repeater in 2016, the Maison unveils its new creation featuring a total thickness of just 5.15mm, while its self-winding movement is just 2.23mm thick for a 40mm diameter. The iconic Octo is once again pushing the boundaries of watchmaking feasibility. 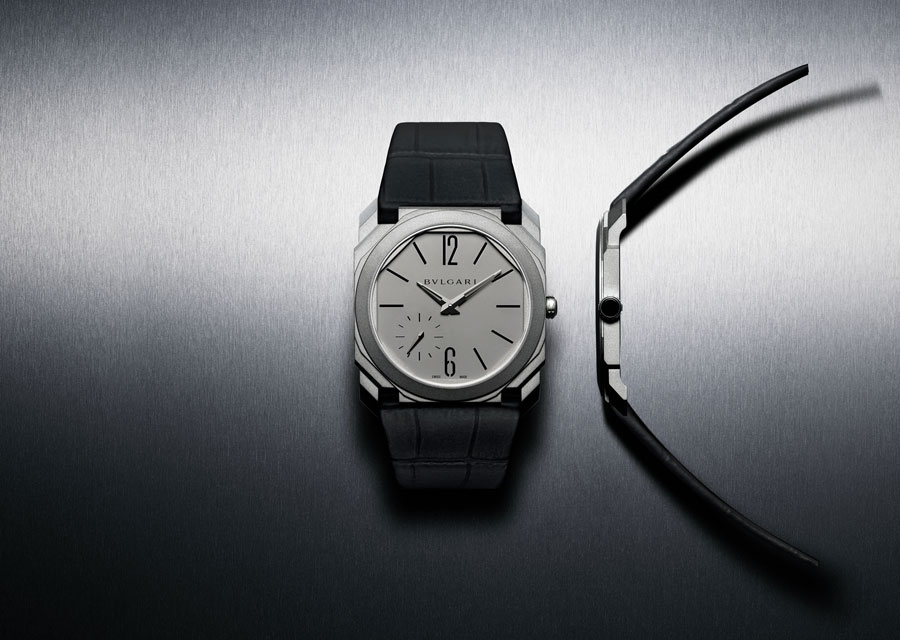 Finissimo. The very name is a promise and a dream. Extreme thinness is a horological complication in its own right. Merely slimming down or miniaturising existing elements would be far too simple. On the contrary, each element – even the tiniest of them – must be conceived and designed right from the outset so as to contribute to the extreme overall slenderness of this exceptional timepiece. This implies not only the parts of the mechanical self-winding movement, but also the entire set of elements composing the case and dial. So as to guarantee the legibility and the highly contemporary contrast effect, the hands and hour-markers are coated with a black PVD treatment.

Wound by a platinum micro-rotor

Manufacture Bulgari has developed a new in-house movement to drive the Octo Finissimo Automatic: Calibre BVL 138. At just 2.23mm thick, it earns the much-coveted title of the slimmest self-winding movement currently on the market. An offset small seconds hand adds an additional to refinement. To ensure smooth energy regulation, it beats at a frequency of 21,600 vibrations per hour and has a 60-hour power reserve. Automatic winding is accomplished via the platinum micro-rotor, a guarantee of efficiency. The watch is water-resistant to 30 metres. Despite the constraints involved in developing an ultra-thin watch calibre, the movement is hand-decorated with Côtes de Genève and circular-grained finishing, resulting in a watch that is extremely impressive in watchmaking terms, while maintain a chic and simple outward appearance. 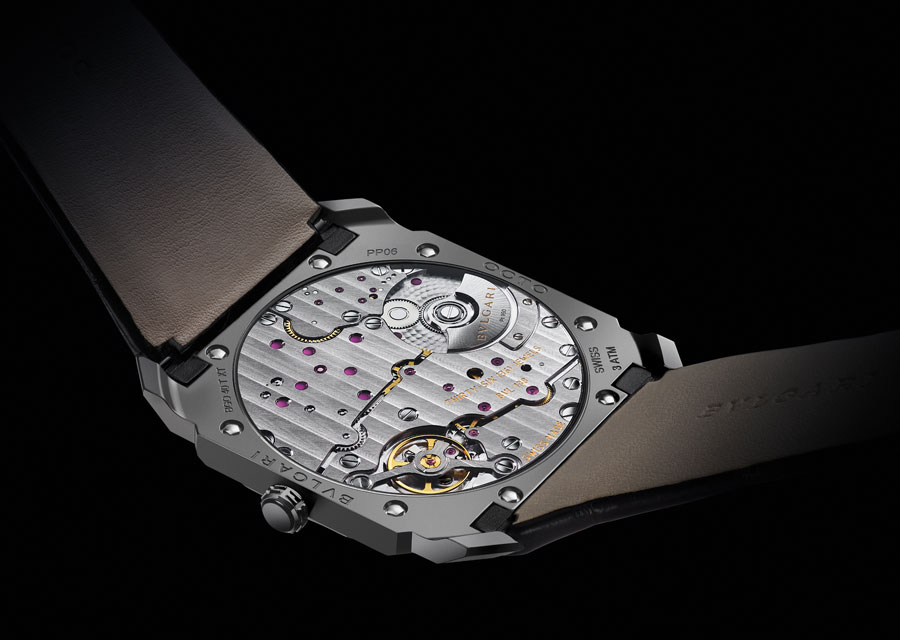 The elegance of extreme thinness relies on mastery of volumes and shapes, and also stems from the subtle approach required in dealing with this field. Such extreme thinness is a bold move conveying a philosophy, a highly complex means of paring down to essentials, with a powerful design that vividly enhances this demonstration of minimalism. 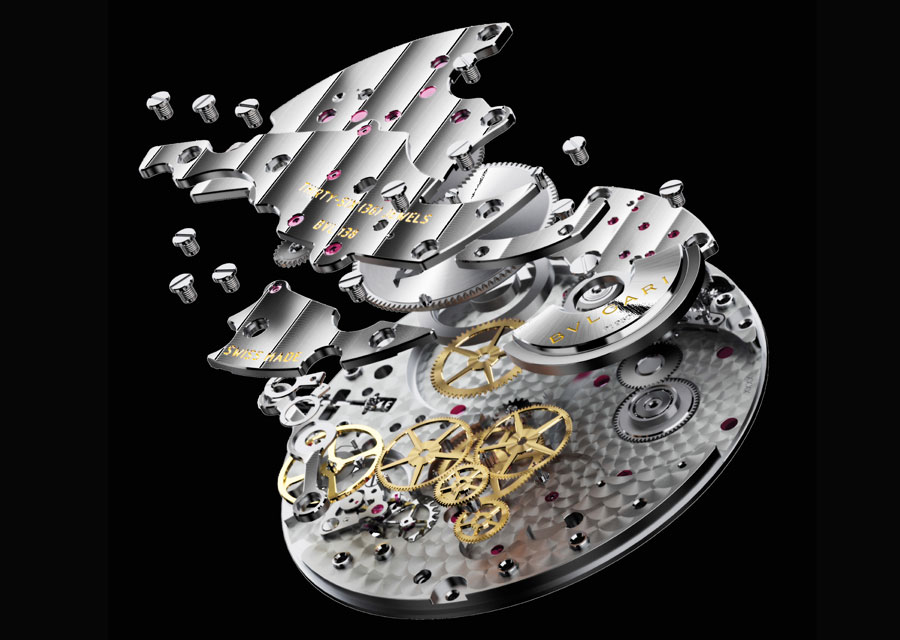 Octo is a paragon of contemporary design that has become one of the pillars of the Bulgari watch collections. This now iconic case confidently flaunts its paradoxical nature that is both very pure and yet very complex, expressed through a strong and daring design. Built in reference to the masterpieces of Italian architecture, its soul and inspiration are entirely attuned to the Roman roots of the Maison. This sophisticated model, showcasing optimal mastery of both shapes and materials, subtly plays with perspective and light effects. Its facets provide shimmering reflections that naturally draw the gaze. Choosing to work with certain materials is also a form of boldness. After gold and steel, the case and dial are now attired in titanium, featuring a sandblasted surface that lends a highly contemporary note to this watch. Prolonging the sensual pleasure procured by the light feel of titanium, the watch comes in a version equipped with an alligator leather strap – in this instance with a matching titanium pin buckle, as well as an extremely beautiful titanium bracelet composed of supple and perfectly articulated links. 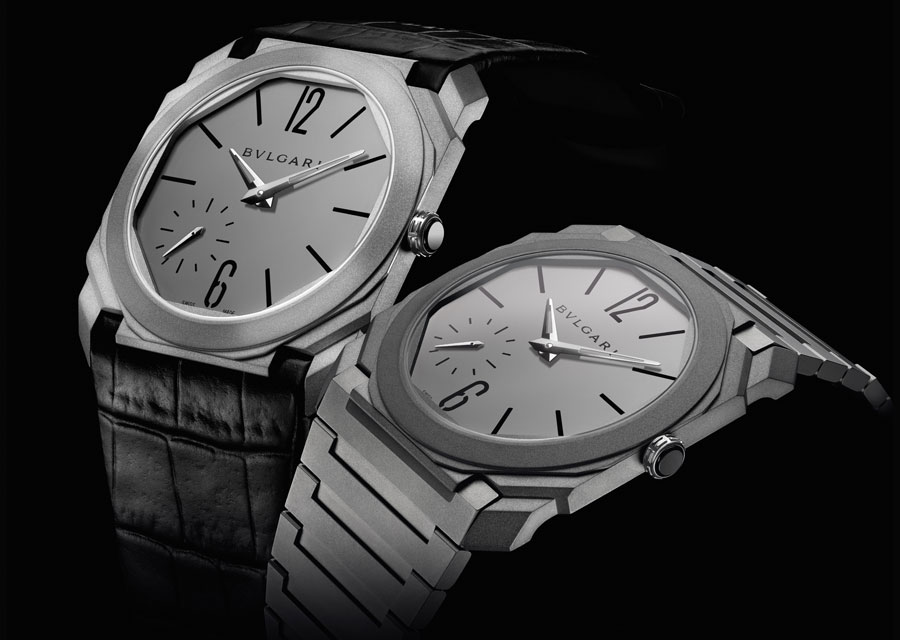 Taking one’s time is an invitation to do things with greater finesse. Continuing its quest for beauty and elegance, Bulgari achieves a new feat with a skeleton-worked new interpretation of its Octo Finissimo Tourbillon, the world’s slimmest tourbillon. 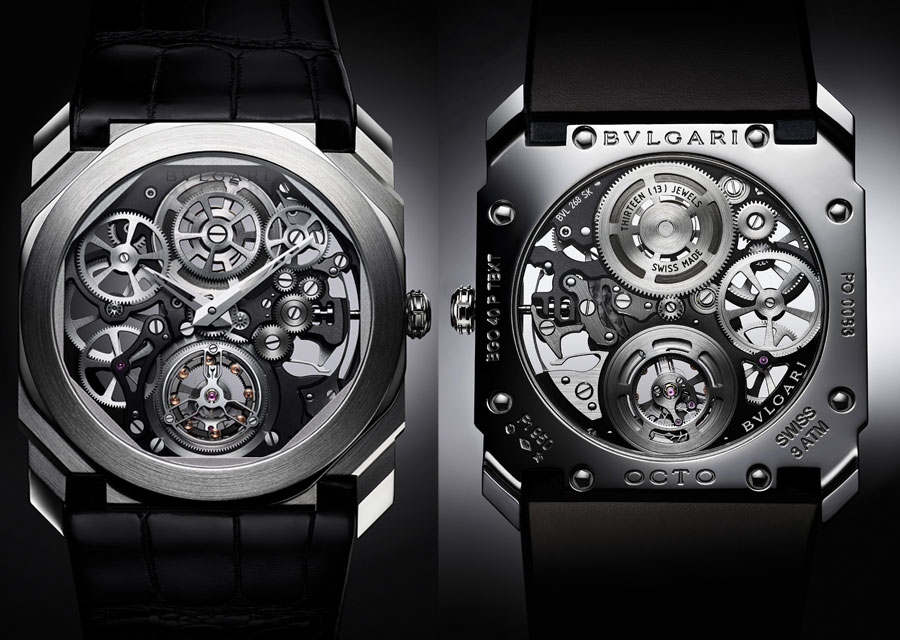 The Octo Finissimo Tourbillon Skeleton is driven by an ultra-thin, entirely openworked tourbillon comprising 253 parts, featuring 13 jewels and eight ball bearings serving to reduce the overall thickness of the calibre. Beating at a frequency of 21,600 vibrations per hour, the movement delivers a 62-hour power reserve. To ensure perfect efficiency and precision, its barrel spring is equipped with a slipping spring and the tourbillon cage is fitted on a peripherally-driven ultra-thin ball-bearing mechanism. This exceptional and exclusive movement houses a barrel held by three ball bearings, an innovative feature serving to double the height of the barrel spring and thus achieve an 80% increase in power reserve, an impressive accomplishment for such a slim tourbillon model. 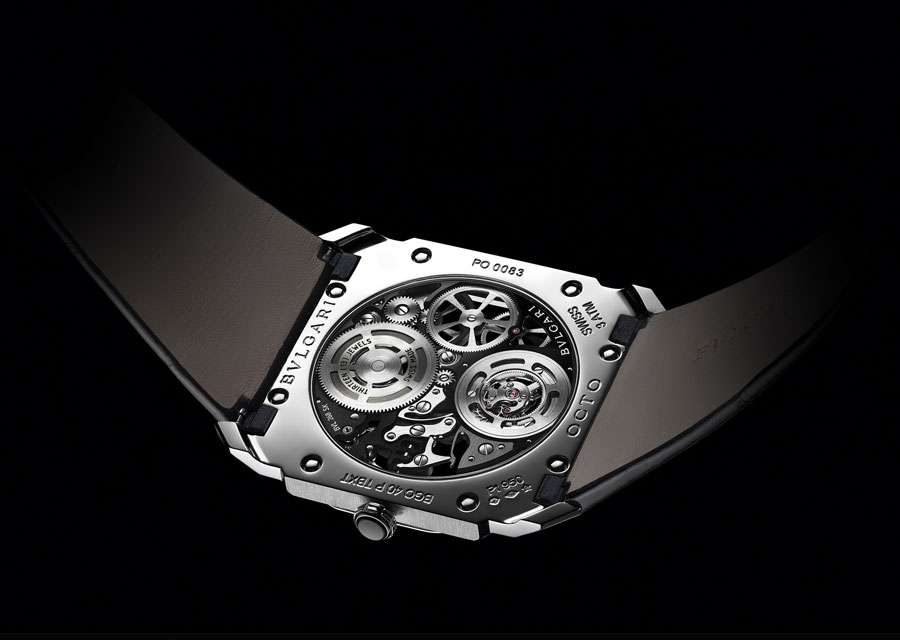 To highlight such a movement with the panache it deserves, the case of this new Octo is made of platinum. The philosopher Emmanuel Kant famously stated: “Appearance requires art and finesse: truth, calm and simplicity”. The new Octo Finissimo Tourbillon Skeleton would doubtless have delighted him.