Its name is inspired by the excellence of the Master-watchmaker. Its sleek style epitomizes mechanical power. At the crossroads between aesthetics and technicality, the new Maestro showcases an original take on the horological creativity of Christophe Claret. Its glass dome provides a striking, almost dizzying view of the movement architecture and the famous Charles X bridges. Endowed with a seven-day power reserve, a cone-shaped large date display and a 3D MEMO function, Maestro asserts itself as the first Haute Complication watch by Christophe Claret with a CHF 68,000 price tag. Nonconformist, dynamic, quintessential… It brings a fresh and youthful touch to the Traditional collection. Play it, Maestro!

A case with pure lines that are both gentle and forceful, an ultra-dynamic curving silhouette, a panoramic vantage point from which to admire the mechanism… Maestro is first and foremost a distinctive signature, a daily art of living, a daring model designed for trendsetters, for insiders, for those on the cutting edge of fashion, often driven by the ardor and boldness of youth. Maestro sets the tone at first glance. The 42mm case – the smallest diameter in the Christophe Claret collections – in grade 5 titanium or 5N pink gold asserts its style with a curvex shape that accentuates its trim design. The choice of a glass dome to serve as a bezel provides a whole new perspective on the movement. The airy and graphic architecture – reinforced by the inner bezel ring with its matt and polished finishing, as well as Christophe Claret’s characteristic two-tone, bi-material hands – is truly striking. ‘Wow’ effect guaranteed! 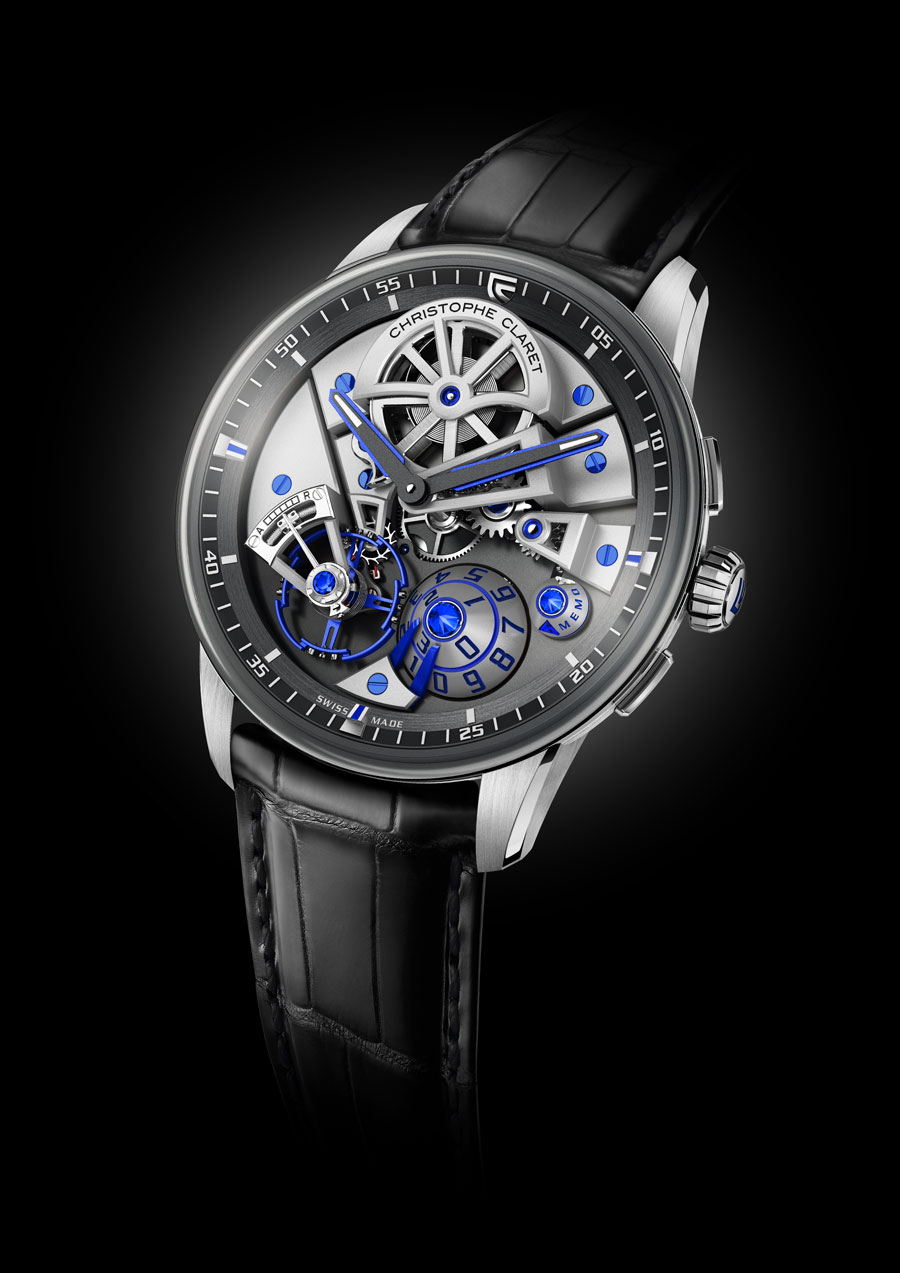 The show really gets going with an exploration of the mechanical hand-wound movement. In line with previous models in the Traditional collection, Christophe Claret has lavished great care on every detail and focused on ensuring an ideal match between technical and aesthetic aspects. The visual journey begins with the famous Charles X style stepped and skeletonized bridges that have become a signature of the Maison through its various collections. The skeleton-working of the bridge supporting the escapement represents a clever blend of classicism and modernity that affords a chance to appreciate all its subtle features. The three mechanical elements composing the watch’s beating heart – the balance-wheel with countersunk screws, the cylindrical balance-spring and the Swiss lever escapement – have all been entirely developed and produced in-house. Expressing a permanent concern for details, a natural ruby or a natural sapphire, depending on the version, adorns this assembly in order to conceal the shock-absorbing system. This rare degree of mastery, encompassing the full range of Haute Horlogerie professions, enables the Manufacture to transcend technical sophistication by its constant pursuit of aesthetic perfection.

The visual adventure through the intricacies of the movement continues with two series-coupled barrels ensuring optimal efficiency and majestically positioned at 12 o’clock. Here too, the bridges are skeletonized to provide an exemplary view of the blade spring of the first barrel and thus enable the wearer of the watch to gauge the state of the seven-day power reserve. A fine example of the golden rule tirelessly followed by Christophe Claret: techniques and aesthetics join forces in serving useful complications. 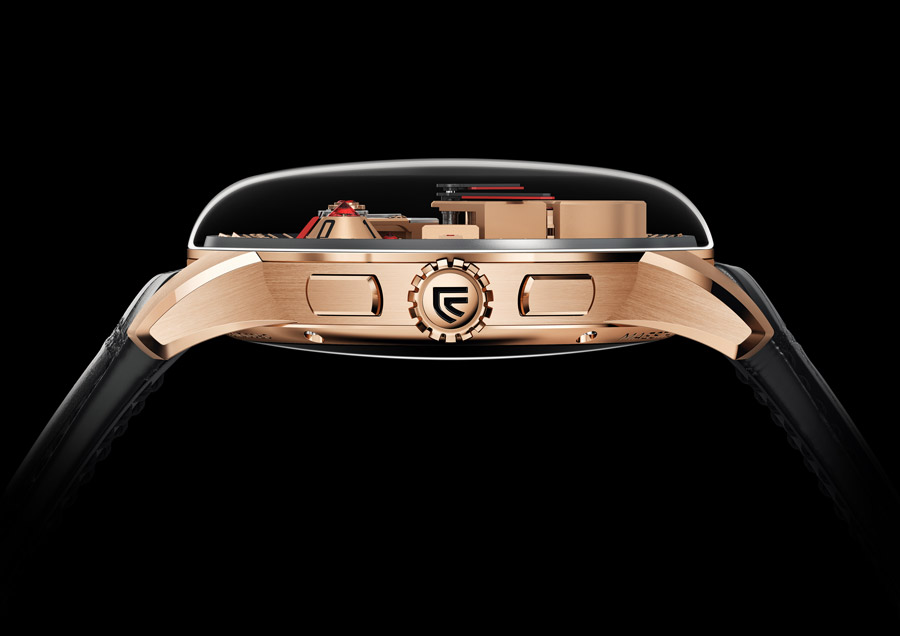 Christophe Claret is a natural-born anti-conformist who never misses out on a chance to express his creative audacity through original displays running counter to traditional design codes. Witness the large date that the watchmaker has cleverly placed at 5 o’clock. Composed of two cone-shaped aluminum disks, one for the tens on the upper part and the second for the units, this patented large date display performs a semi-instantaneous jump between midnight and twenty past midnight. Lending the perfect finishing touch, its top is set with a natural ruby or a natural sapphire.

As if to echo the 3D effect of this voluminous date display, another cone shape – also topped with a sapphire or ruby – draws the gaze to the space between 3 and 4 o’clock. Never one to stint on playful complications liable to fire the imagination of watch connoisseurs, Christophe Claret unveils here another brand-new function. Inspired by the expression “tie a knot in your handkerchief” to help one remember something important, MEMO is an ingenious mechanical reminder intended for absent-minded individuals as well as fans of technical gadgets. Whether it’s a cue to pay a daily compliment to a loved one, to meditate for ten minutes a day, to take a half-hour walk, to eat five portions of fruit and vegetables, to write a love note every day to his sweetheart… Whatever daily objective the owner of the Maestro has set himself, the MEMO adorned with a sapphire or ruby and a diamond – depending on the version – is there to remind him of his commitment. Once the objective has been met, a simple press on the pusher pivots the MEMO function, which will return to its initial position each night in a twenty-minute process driven by a semi-instantaneous jump system. 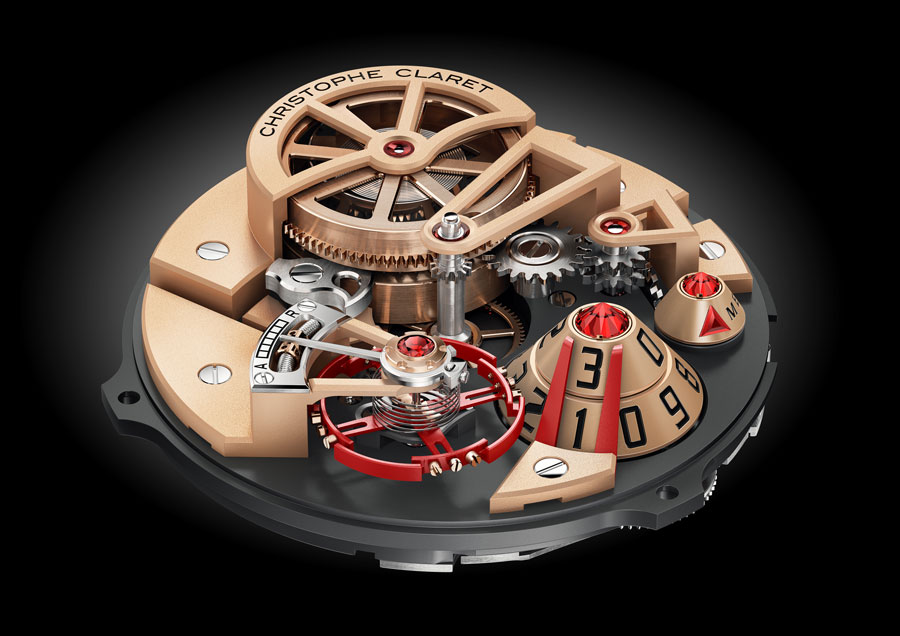 In keeping with the previous Christophe Claret collections, the quest for perfection is vividly expressed through details. Hand-finished according to the noblest Haute Horlogerie traditions, the Maestro reveals a level of finishing that few watch manufacturers can claim to master, such as the stepped Charles X style bridges featuring 26 interior angles. A sapphire crystal pane fitted on the back of the watch provides a chance to admire the meticulous movement decorations.

Maestro is available in 5N pink gold or grade 5 titanium and both versions are issued in 88-piece limited editions. 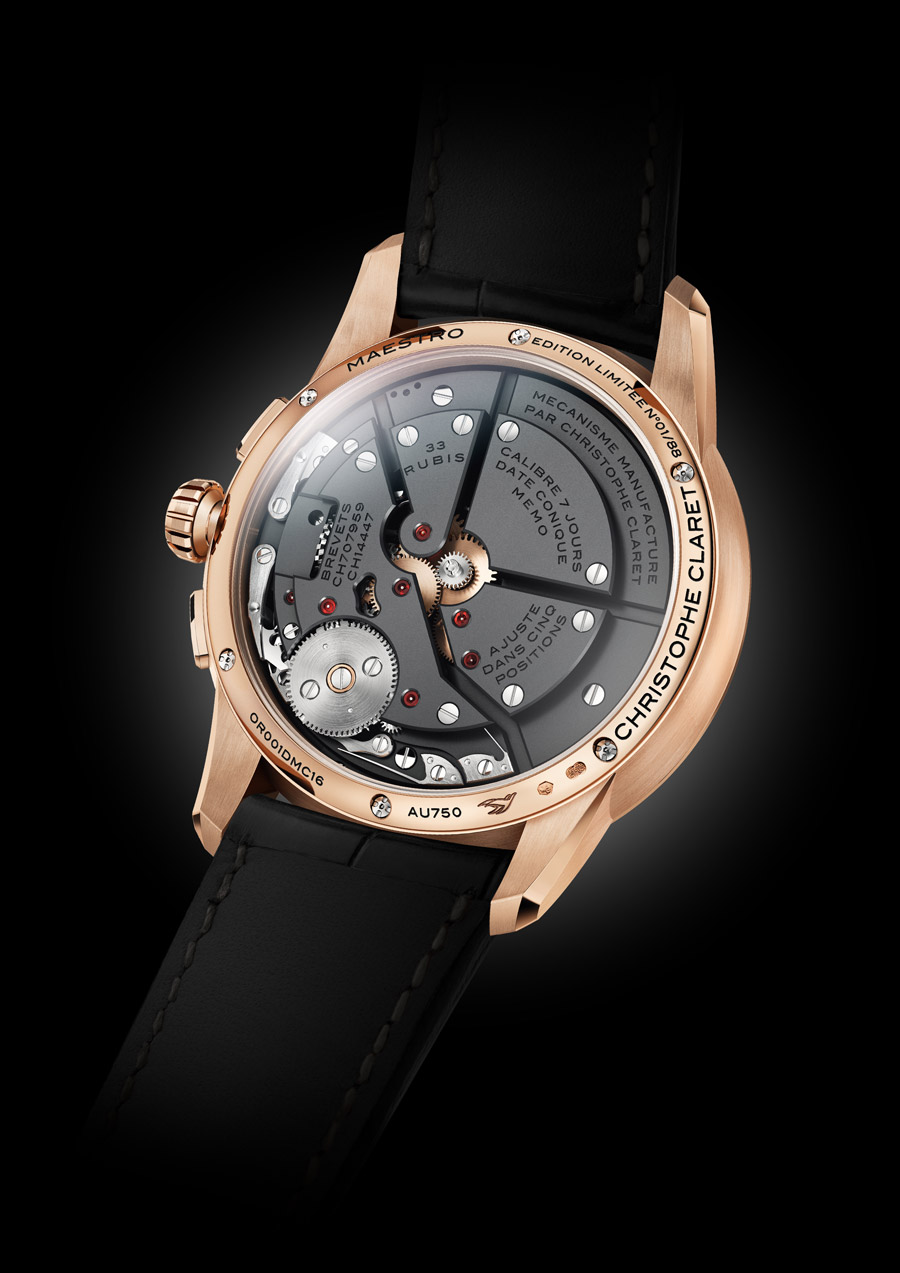