Richard Mille transfer the street art to the wirst by associating with Cyril Kongo. RM 68-01 Tourbillon wears until his mechanical heart graphical language marks of this modern artiste, graffiti engineereing. 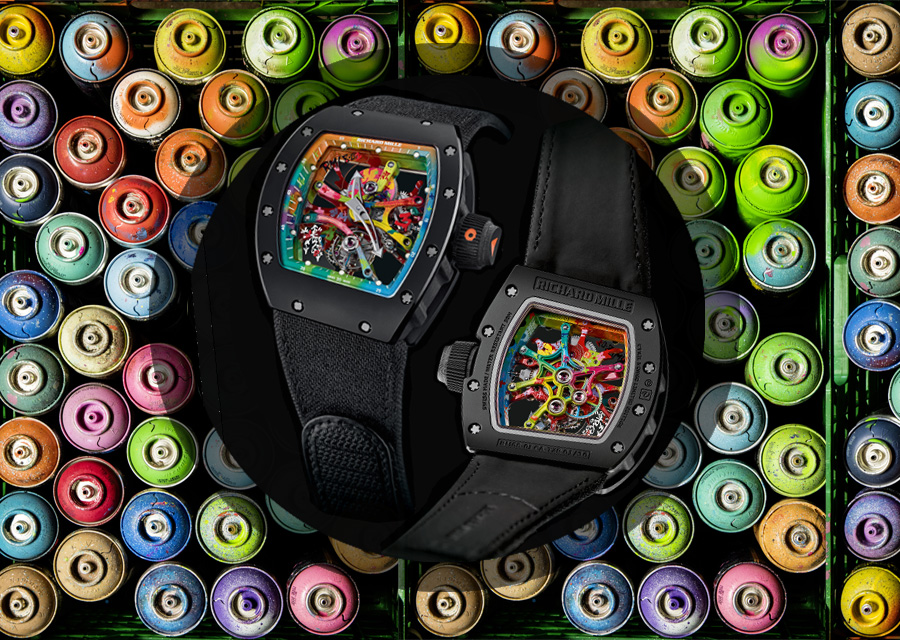 The RM 68-01 is the outcome of Richard Mille’s desire to introduce contemporary art within haute horlogerie in an unprecedented manner. Indeed, this tourbillon calibre is more than a watch, insofar as it also serves as a canvas for the inspiration and creativity of street artist Cyril Kongo. Never before has a work of art thus taken shape on the bridges and baseplate of a watch, becoming a truly integral part of the timepiece. Richard Mille and Kongo succeeded in taking an art essentially associated with large-scale urban murals and translating it for the horological world of micromechanics and precision, thereby making a leap from city walls to bridges, baseplates and sapphire dials of watchmaking. Kongo: ‘I come from graffiti. All my work originates there. It was my school for painting, I learned in the street. I need to remain in touch with that world while at the same time looking at what’s happening elsewhere. Graffiti is a language with its own codes, a form of writing, whether this be on a gigantic wall, on canvas, or any other surface. I am not a painter bound to a single space, nor to any particular surface.’
It took more than a year to develop the painting technique used by Kongo. A special airbrush was developed to allow the artist to spray his colours with the utmost delicacy, one droplet at a time. To avoid jeopardising the calibre’s equilibrium, essential to its functioning, the weight of the paint had to be strictly determined beforehand. 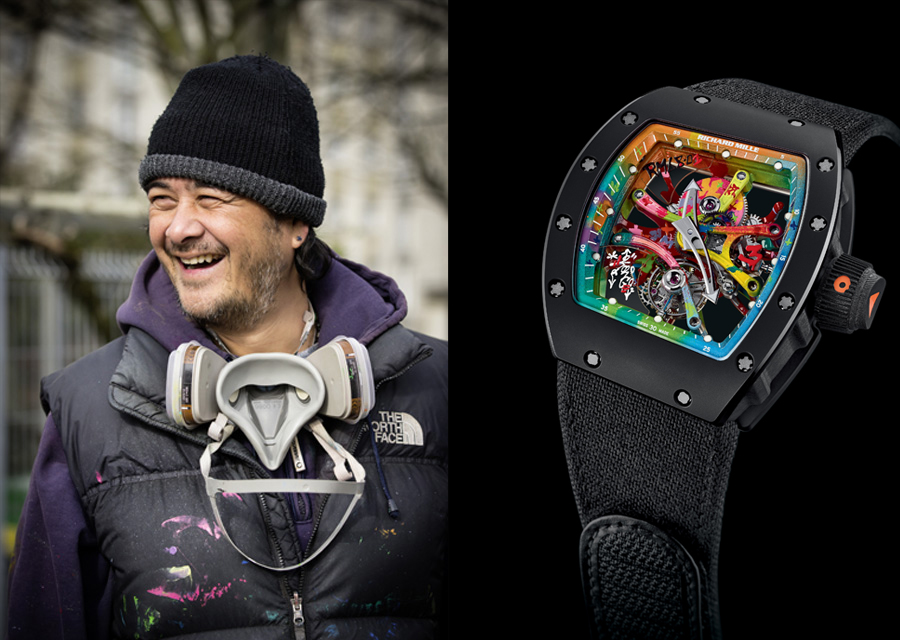 This significant challenge involving all the teams collaborating on the RM 68-01 project resulted in the creation of a unique palette of brightly coloured indelible paints that adhere perfectly to the titanium components and can endure assembly and dismantling.
Kongo: ‘It took the development of special tools, and over a year of experimentation for me to be capable of painting on a watch some five centimetres (two inches) square. Certain pieces were barely a few millimetres long, some even smaller, and I had to put the lettering directly on them, enough for visual effect but without using much paint so as to avoid throwing off the balance of the movement. It’s as though, starting from a complete automobile, I had to paint the chassis, the engine, each piston etc.’
This production technique made it possible to draw lines barely visible to the naked eye and impossible to create directly by hand, even if certain motifs were sketched using pens with especially fine nibs. Regardless of the technique, every component of each watch was painted in the hues of the man known as Mr Colourful. 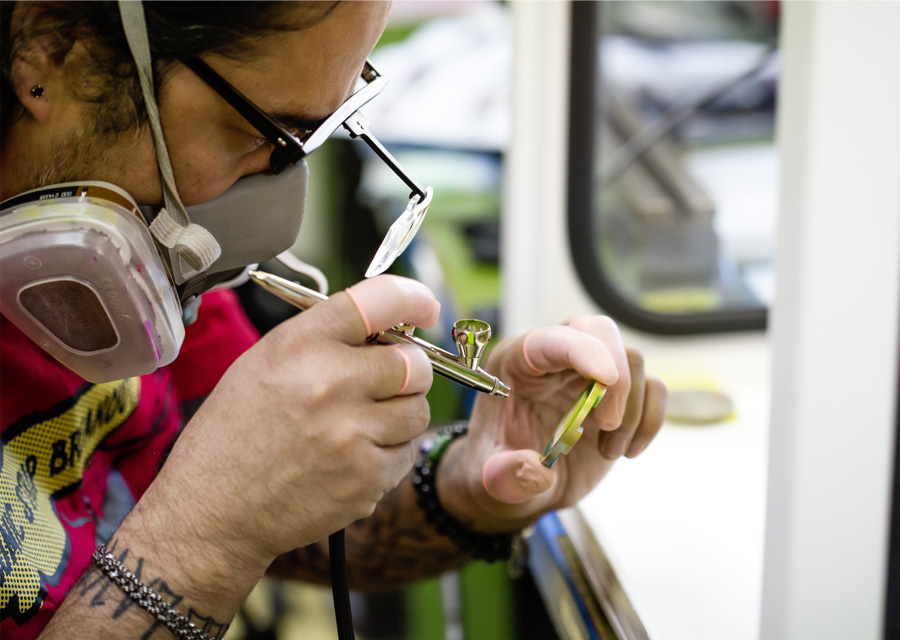 The RM 68-01 demanded that Kongo rethink his approach to graffiti in order to adapt his artistic vocabulary for the extremely limited surface of a calibre. His real triumph lies how he makes it possible to contemplate his work from every aspect of the piece.
‘He has pushed back the furthest boundaries of horological technique, pronounced Richard Mille. This is exactly what I wanted, to bring Kongo into a watch. He wasn’t content simply to apply paint to here and there. Cyril Kongo made it his own, from the movement to the tourbillon, by way of the case and dial.’
On the back of the watch we see the central form of the tourbillon movement’s baseplate radiating outwards like a splash of paint physically thrown against a wall, while from the front the different movement bridges can be seen arcing in different directions like the wild brushstrokes found in street art murals. Housed within a case comprising an NTPT Carbon caseband with black ceramic bezels, the asymmetric case design tapers in two directions—in thickness from 9 to 3 o’clock and in height between 12 and 6 o’clock. The RM 68-01 combines contemporary mechanical and visual arts in a truly exceptional expression of 21st century timekeeping. 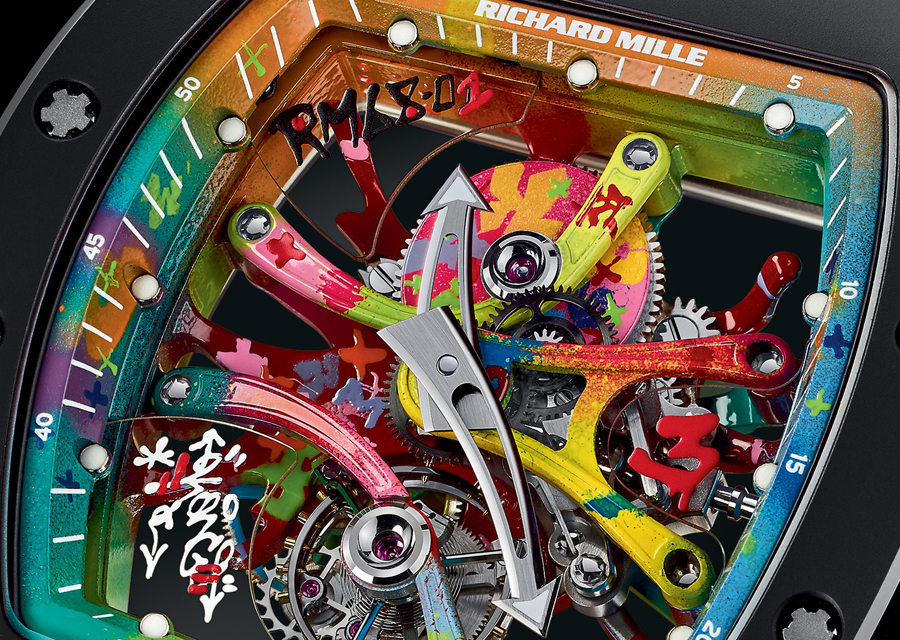 Known internationally under the pseudonym Cyril Kongo, the graffiti artist Cyril Phan was born in 1969 and presently resides in Paris. A self-made man and artist, he launched himself to the top of the French artistic and cultural world as well as Europe and beyond within a space of a just a decade. His mastery of the discipline and his over twenty years of membership in the MAC CREW collective have established him as one of the legendary, major representatives of the world’s graffiti scene. Over the course of time, he has developed and expanded his artistic vision and approach cumulating in a fully articulate artistic maturity not defined merely by graffiti. Inspired by frescos and wall paintings, he has, in essence, transformed graffiti as a genre.
Limited to 30 pieces worldwide.