In preview of the Salon International de la Haute Horlogerie (SIHH), which will open its doors on January 14 in Geneva, the Girard-Perregaux manufactory presents in preview some of the innovations that will enrich next year’s Cat’s Eye collection exclusively for women. Pieces that combine their oval shape with beautiful watchmaking complications, such as a tourbillon and moon phases, on hypnotic dials made of adventurous glass. 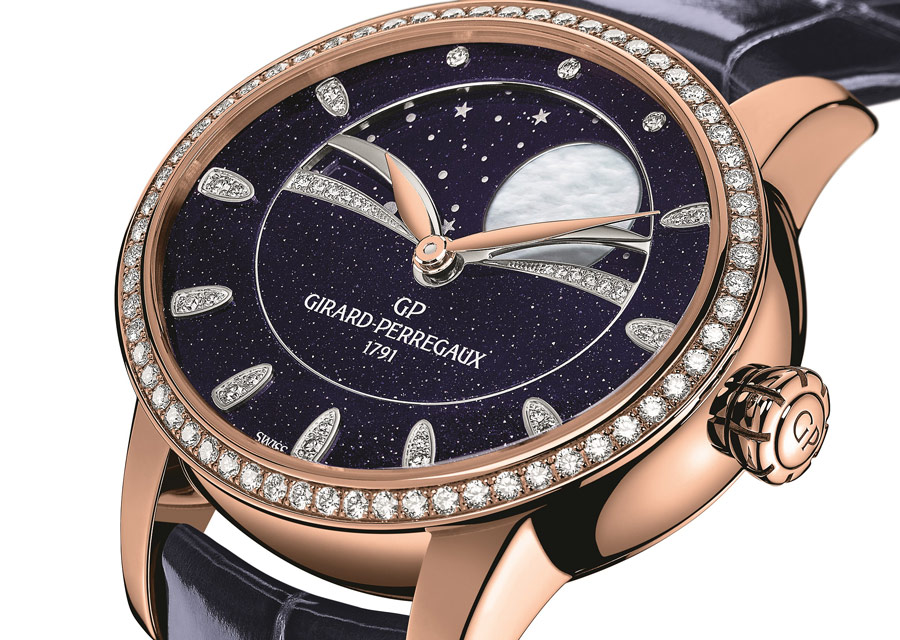 It’s the story of a journey to Italy, across the ages, gliding through the night beneath a moonlit sky. Offering variations on the theme of its iconic Cat’s Eye, the Manufacture Girard-Perregaux presents three new creations exuding a resolutely sophisticated aura. The depth of their aventurine glass dial irresistibly evokes the Island of Murano. A place that gave rise to masterpieces that were to experience extraordinary destinies in powerful families and royal courts. The Cat’s Eye Majestic, Celestial and Tourbillon models with their aventurine dial speak of a splendid golden age and creative inspiration that consistently delivers its very best – including in occasionally unexpected ways.

Reaching the Island of Murano by vaporetto across the lagoon takes a mere few minutes. When Venice was ravaged by fire, its master glassmakers and their furnaces moved to the island to exercise their craft. Within a few centuries, it became a world-renowned art with the creation of a glass as pure as rock crystal, or colour-saturated through the use of oxides. Various techniques magnified this light-filled material. Anne of Brittany, Marguerite of Austria, Charles V and Catherine de Medici ordered entire glassware sets. Chandeliers and candleholders adorned the ceilings of palace. Stung by jealousy, the Sun King commissioned spies to bring the artisans and their expertise back to France.

Air, water and fire are transformed in Murano, by means of preciously safeguarded trade secrets, whether they stem from empirical knowledge or coincidence. The latter presided over the birth of aventurine glass (also known as goldstone), which arose in the 18th century from mishandling by a glassmaker who accidentally (all’avventura) spilled copper filings into the traditional mixture of silica, soda and incandescent lime. While initially slow to react, the matter was gradually transformed into sparkling glass studded with golden spangles. Chance had worked its magic. 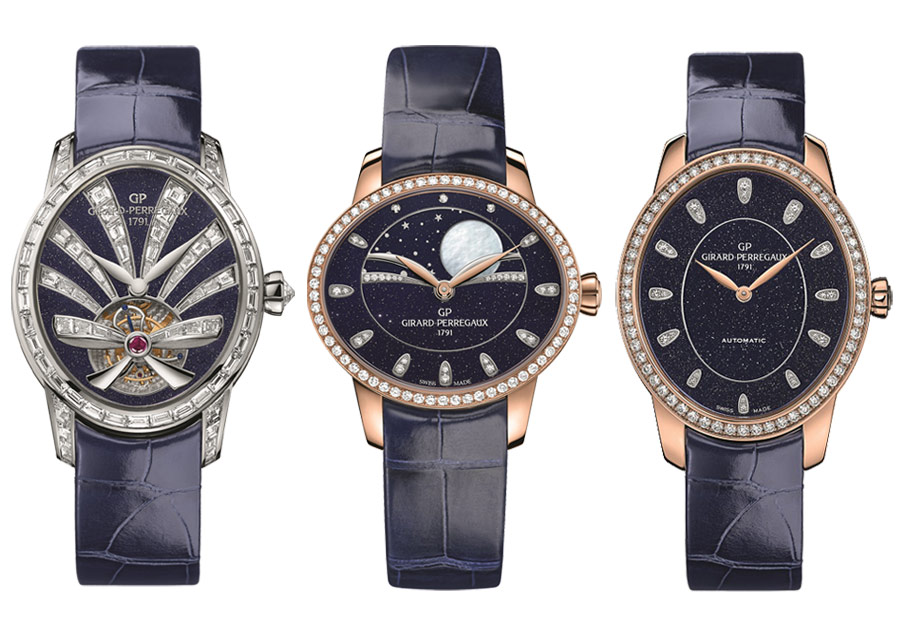 The graceful charm of its dainty curves makes oval the epitome of femininity. A dial never so truly deserves its name as the ‘face’ of the watch as when it features such an elliptical shape. On the new Cat’s Eye Majestic, the oval is arranged vertically and beautifully extended by the tapering lugs. The pink gold case set with 60 brilliant-cut diamonds ennobles the enigmatic dial, extending an enticing invitation to be won over the benevolent forces of the night. Its seductive colour hovering between blue and black further accentuates the mystery. The fascinating golden inclusions sparkle like remote yet dazzling stars. Adorning the pink gold oval ring subtly reinforcing the shape of the dial itself, a shower of 24 drop-shaped diamonds heralds the hours dedicated to dreams.

Above and beyond its role as an object of contemplation, since no one can resist the captivating sight of aventurine glass, the Cat’s Eye Majestic displays the hours and minutes thanks to a mechanical self-winding movement endowed with a 46-hour power reserve. The sapphire crystal case-back provides a chance to admire this in-house movement adorned according to the high standards cherished by Girard-Perregaux, notably illustrated by the gold oscillating weight bearing the “GP tapestry” motif.

Witt its enchantingly powerful evocation of a summer night, the Cat’s Eye Majestic calls on the imagination of the woman wearing it, while revealing its supreme beauty.

The horizontal oval of the Cat’s Eye Celestial lends a radiant expression to the watch. It graciously welcomes a moon phase that is sophisticated on both aesthetic and mechanical levels. This generously proportioned complication is highlighted by a hand-polished mother-of-pearl and aventurine glass dial. In tiny pointillist-style touches, the various elements are carefully adjusted to as to vanish and merge into this allegory of femininity. Whether as quarters, waxing or waning crescents or full, the moon holds a unique place in our imagination. We know it is responsible for tides in conjunction with the sun. Various powers are ascribed to it, whether proven or not. For the woman wearing the Cat’s Eye Celestial, it is essential to be in harmony with the Earth’s graceful satellite, in touch with her feelings, and confident in handling this crown-adjustable horological complication whose accuracy is such that it requires just one correction every 360 years.

The heavenly vault is the kingdom of the moon, vividly embodied in the aventurine – surrounding the complication as well as on the disc bearing the mother-of-pearl moon – which lends incredible depth to the tableau. The sparkling inclusions reflect the radiance of the diamonds symbolising the hours. Only an in-house movement crafted in accordance with the criteria upheld by Girard-Perregaux could guide this nocturnal journey towards ultimate precision. The Cat’s Eye Celestial is powered by a proprietary movement entirely designed, developed, produced and finished in keeping with the noblest Fine Watchmaking traditions.

From Murano to Switzerland, exceptional objects pursue the same vocation, that of sparking extraordinary emotions.

In the sky portrayed on the night blue dial, the trail of baguette-cut diamonds evokes the shooting stars whose path one follows while making a wish. The result of great patience and dexterity, the gemsetting on this exceptional Cat’s Eye begins by selecting stones according to their quality as well as by decreasing size so as to ensure they fit perfectly together. This will determine the vivacity of the motif thus created, like a dazzling effect whose radiance is increased tenfold by the aventurine.

The flurry of baguette-cut diamonds continues along the bezel, accentuating the dainty curves of its oval shape, and then spilling onto the subtly elongated lugs. The silhouette of this watch is supremely elegant, ensuring a sleekly refined presence on the wrist. The couture tone is thus set and the gemset gold bow holding the tourbillon further contributes to transporting the observer into a realm where visual allure reigns supreme.

A major complication whose mission is to counteract the effects of gravity on a watch’s precision, the tourbillon has a head-spinning effect. The sight of its lyre-shaped rotating carriage is truly mesmerising, while the superb hand finishing applied to this tourbillon is equally fascinating for women sensitive to authentic horological substance. This expertise has been lavished on the entire hand-wound in-house movement, clearly signalling its place within the rarefied spheres of Fine Watchmaking. The one-of-a-kind Cat’s Eye Tourbillon is set with 6.20 cts of diamonds, right the way through to its flower-shaped crown adorned with a rose-cut diamond. Its presentation box is a palace in itself, while its ultimate meaning lies in the celebration of art and beauty.