Among the beautiful feminine novelties presented by the Cartier house during the Geneva International Haute Horlogerie Show in january, the Panthere is finally back to the forefront in june, to the delight of elegant wrists. 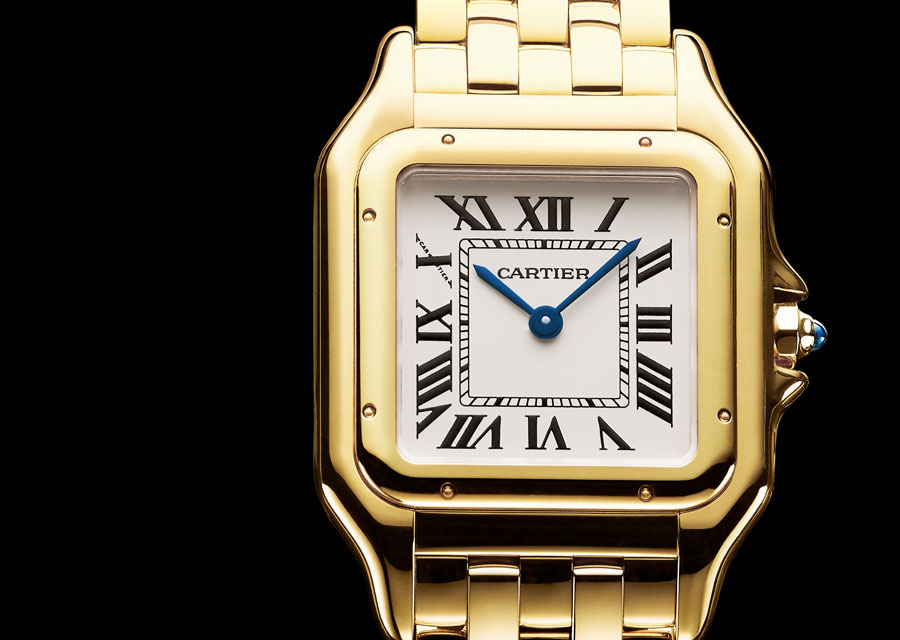 It is in 1983, that the Panthere shows its claws for the first time at Cartier. Square shape, rounded corners, fluid lines and powerful at the same time : the Panthere will delight the ladies almost during twenty years before disappearing from the catalog in 2004. The fans of this icon of the 80s can be reassured: it comes back this month, almost unchanged! However, two notable improvements have been made. The box is now bigger, in order to guarantee the sealing without denaturing the extreme femininity of the piece. The Panthere de Cartier, vintage 2017, is now available in two sizes: the small model gains 0.5 mm side, the model means 0.1 mm. And the bracelet also benefits from the latest improvements of the Cartier manufacture. It has thus been reinforced to prevent the relaxation, which is generally observed over the years when we wear his watch every day, while maintaining great flexibility. 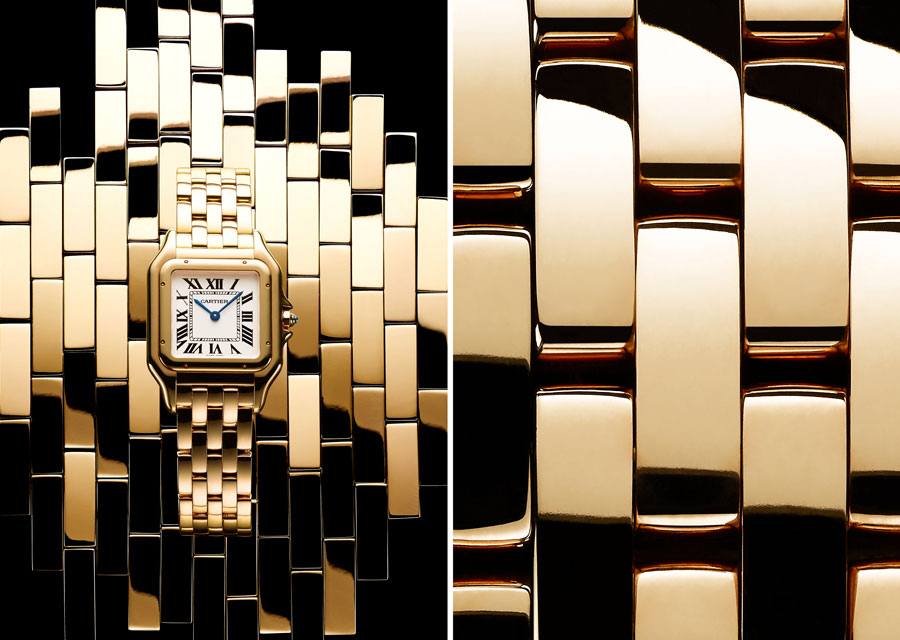 Just arrived in shops, The Panthère watch is available in a multitude of versions

Its box of square shape and its dial concentrate all the codes of the timepiece signed Cartier: crown with cabochon blue sapphire, Roman numerals, timer “railway”, needles of type “glaive” in blue steel, without forgetting the secret signature Cartier, located in one of the bars of the X. Many materials embellish the boxes and bracelets to ensure its owner blend into the urban jungle with style.

Seventeen versions make up the new collection to sublimate all the wrists. The small and medium models are available in steel (3 850 € and 4 450 €), in yellow gold, in pink gold (19 200 € and 22 200 €) or in gray gold, with or without bezel set with diamonds. Yellow gold is also associated with steel for even more stylish 1980s variants. 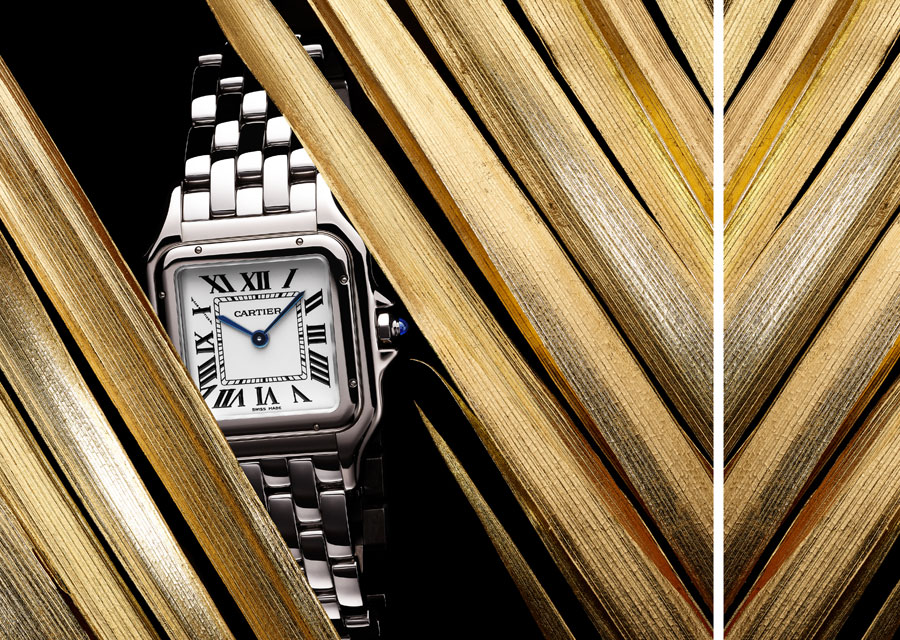 This watch finally aesthetically affirms the feline dimension of its name, through two declensions in pink, edited in limited series of 30 pieces for the medium model and 50 for the small, contrasting touches of black lacquer. Highlight of the collection, the Panthère watch is transformed into a superb jewel of character that gives the time, in an ultra jewelery edition in gray gold paved with diamonds, punctuated with spots in black enamel. Each line reference is animated by a high precision quartz movement. 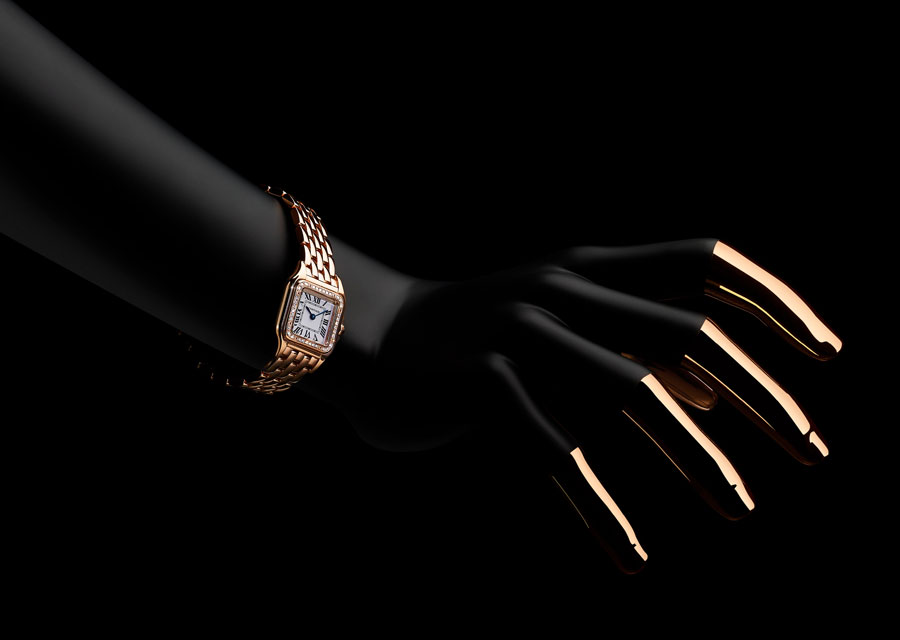 To direct the film for the last Panthère watch collection, Cartier has chosen Sofia Coppola, symbol of style and feminity

For as long as we can remember, Sofia has stood out as an icon of style, taste and contemporary elegance. As a determined artist whose work transcends trends, she gives sensitive expression to what femininity is today. While men do sometimes play roles central to the narrative of herfilms (Stephen Dor! in Somewhere or Bill Murray in Lost in Translation), her leading characters are almost exclusively women. The female perspective is an element particularly relevant to Sofia, a point of view she conveys, time and again, so aptly on screen. With an abundance of talent and a distinctive artistic vision, she knows, better than anyone, how to reinvent the past with a rigorously contemporary touch. Her vision of the 80s and of what it means to be a Panthère woman is the perfect match for this collection, which was born in 1983. 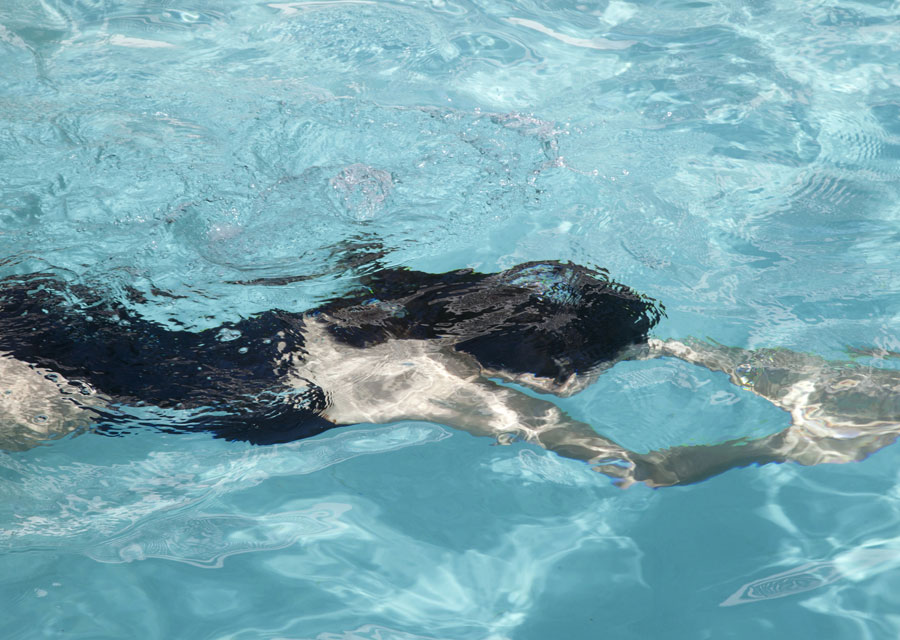 “I’ve always loved Cartier, the archives, the history and the design which is very unique. I am a fan.

When Cartier told me that they wanted to make a film for the relaunch of the Panthère de Cartier watch, I first thought: who is a Panthère woman? What would her environment be? I love the Panthère watch, so I was happy to make a film which captured the chic and the glamour of what it says to me.

The Panthère watch is unique because it is a piece of jewelry that you can wear in the day as a glamour look as well as in the evening.

When the Panthère watch came out in 1983, there were so many great movies, and I love the stars of that time. I remember the glamourous kind of women who wore a Panthère watch. It was just a stylish time to remember and to propose a modern interpretation of it. The Panthère woman is elegant, sophisticated, chic and glamourous, still sexy and fun. I think she is a European woman who travels, so we set the story in that way. We just shot a couple of days in LA, in some great locations as Union Station downtown, the Georgio’s night club, a hotel in Hollywood and the “Fox Residence”. I think we have a kind of glamour Panthère setting.

I remembered meeting Courtney Eaton at a casting for a film, she just has charm and naturalness. We thought about friends for her to be in a club. I met Amanda and her sister Brooklyn, that I first met in Paris and I was very happy that they could join us.”

The dazzling path of an icon of style

Sofia Coppola is an Oscar-winning writer and Oscar-nominated producer and director. Coppola grew up in Northern California and studied Fine Art at California Institute of the Arts.

She wrote and directed the feature The Virgin Suicides adapted from Pulitzer Prize-winner Jeffrey Eugenides’ novel of the same name. The movie starred Kirsten Dunst, Josh Hartnett, James Woods, and Kathleen Turner. With a world premiere at the Cannes International Film Festival, The Virgin Suicides subsequently earned her the MTV Movie Award for Best New Filmmaker. 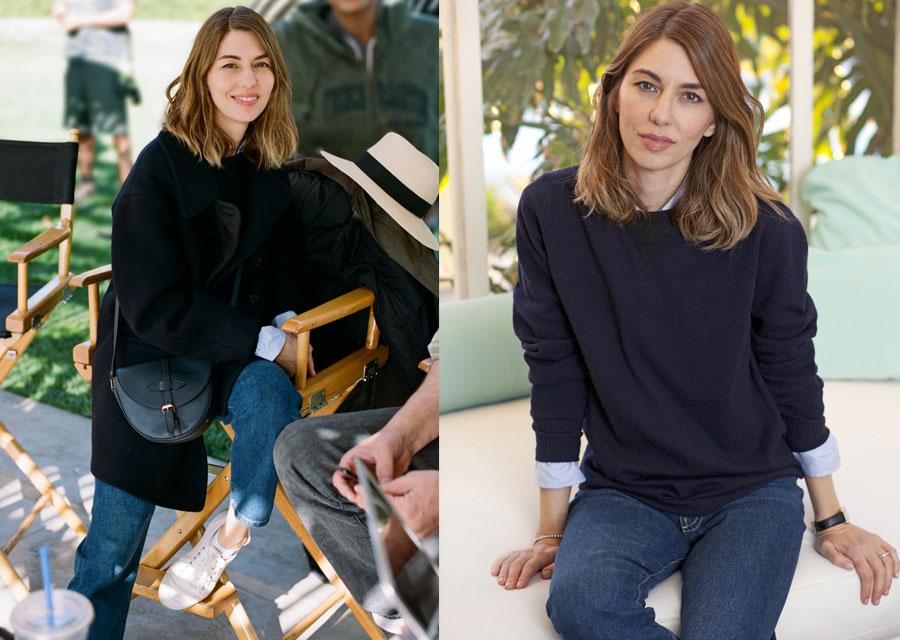 Coppola’s next film, Lost in Translation, was her first with Focus Features, and screened at the Toronto, Venice, and Telluride Film Festivals. The movie brought her the Academy Award for Best Original Screenplay as well as Academy Award nominations for Best Director and Best Picture (in her capacity as producer).

Bill Murray and Scarlett Johansson won BAFTA Awards for Best Actor and Best Actress, respectively, among many other honors that the cast and crew received worldwide.

Her third feature as writer/director, Marie Antoinette, was based in part on Antonia Fraser’s biography Marie Antoinette:The Journey, and world-premiered at the Cannes International Film Festival. The movie, which Coppola also produced, starred Kirsten Dunst in the title role. The film’s costume designer, Milena Canonero, won an Academy Award for her work on the picture.

Ms. Coppola’s fourth feature, Somewhere, was shot at the Chateau Marmont in Los Angeles. She wrote, directed and produced the movie, which stars Stephen Dor! and Elle Fanning. It premiered at the 67th Venice Film Festival, where it was honored with the top prize, The Golden Lion.

Her next film, The Bling Ring, based on true events, followed a group of teenagers on a thrilling and disturbing crime-spree in the Hollywood Hills, with an ensemble cast starring Emma Watson, Leslie Mann, Taissa Farmiga, and Katie Chang. Written and directed by Coppola, it was released in June 2013.

Most recently, Coppola wrote, produced and directed A Very Murray Christmas in which Bill Murray rounds up an all-star cast for an evening of music, comedy and good cheer and was released by Netflix in December 2015. In addition, Coppola made her opera debut with a production of Verdi’s classic, La Traviata. Coppola teamed up with fashion designer Valentino and production designer Nathan Crowley for the opera which opened at the Rome Opera House on May 24, 2016.

Coppola’s upcoming film, The Beguiled, which she directed, wrote and produced, is adapted from Thomas Cullinan’s novel of the same name and stars Elle Fanning, Nicole Kidman, Kirsten Dunst and Colin Farrell. Coppola was honored with the Best Director award at the 2017 Cannes International Film Festival, the first woman director in fifty-six years to receive the award. The Beguiled has been released through Focus Features in June 2017.